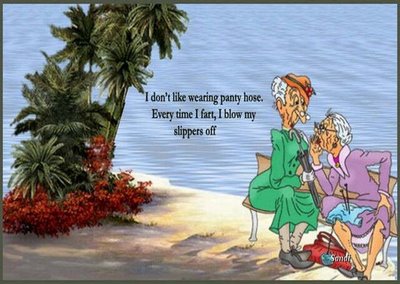 I just love the smell of Microwave popcorn in the evening!
With the NCAA tournament on the television in the next room as a backdrop, I was ready to sit down at the computer for a little while. From the kitchen there was a melodious chime. But soft, what aroma from yonder Microwave oven? Whoever it was who said Manna came from Heaven, obviously never owned a Microwave oven. Manna comes from a magical package the size of a man's wallet. When inserted into that omnipotent box, that package is transformed into a food worthy of even a Blog God.
The miracle of it was first apparent when I opened the bag and was temporarily blinded. It was not a Holy brilliance, but rather the steam fogging my glasses. This was only a minor annoyance, for my olfactory senses were rewarded by the warm bouquet within. With just the right amount of salt and melted butter, this was Manna in a poke! Speaking of rewards:
Henry Ford in Heaven
Henry Ford died and went to Heaven. At the gates, St. Peter greets him and says, "Well, you've been such a good guy, and your invention - the assembly line for the automobile changed the world. As a reward, you can hang out with anyone in Heaven you wish."
Ford thinks to himself about it and replies, "I want to hang out with God himself!"
So St. Peter takes Ford to the Grand Throne Room and introduces him to God. Pleasantries aside, Ford then asks God, "When you invented woman, what were you thinking?"

God asks in return, "What do you mean?"
"Well," says Ford, "You have some major design flaws in your invention: (1) There's too much front-end protrusion. (2) It chatters way too much at high speeds. (3) Maintenance is extremely too high. (4) It constantly needs repainting and refinishing. (5) It is out of commission at least 5 or 6 days out of every 28. (6) The rear end wobbles too much. (7) The intake is placed too close to the exhaust. (8) The headlights are usually too small. (9) Fuel consumption is outrageous. ....That's just to name a few."
"Hmm ...," ponders God, "Hold on a minute."
God goes over to the Celestial Supercomputer, types in a few keystrokes, and waits for the results. In no time the computer prints out a report and God reads it.
God turns back to Ford and says, "It may well be that my invention is flawed, but according to these statistics, more men are riding my invention than yours."
While on the subject of riding: (Click on image for larger view and to read caption.) 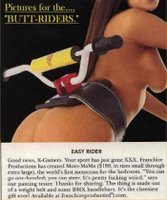 Imagine! Exercise that is fun!

To have success as an inventor one must have imagination and the intuition to see the market. Whether one is inventing an assembly line, a Microwave oven, popcorn, a woman or exercise equipment, one needs an education. The subject of education reminds me that:

A Hillbilly family's only son managed to save enough money to go to college. He figured it shouldn't be too hard, it only took him 30 years to get through High School. After he graduates Magna Cum Lawd He's Dumb in 8 years, he came back home. The family was sitting around the dinner table when the father said, "Well son, seein' as you done gone to college, you must be purty durn smart. Why don't you speak some Math for us?" Junior sat up straight and said, "Okay, Pa. Pi R squared." After a moment the father said, "Tarnation! Son, they ain't teached you a lick! Pie are round. Cornbread are square!"

I just had another thought: It's about time I ended this post.

That's better Mike, I read that post straight through and didn't have to reach for the dictionary once.

I was born and raised in Germany. Popcorn was a delight and a must at every cinema trip. When I moved to Iceland, and waited for quite a while to learn how to say: "one ticket" in this god-forsaken language and off I went to my first Icelandic cinema experience. I bought a huge portion of popcorna dn settled comfortably into my seat. My hands gripped some pieces of this delicous treat. But as soon as they reached my tongue I was in shock: Salty popcorn. Just salty and nothing else!

See: Different Countries prefer different kinds of popcorn and while Germany is on the sweet, butter-honey path...icleand wants it salty! Sock I say!

My favorite popcorn is buttery salted microwave popcorn, and then I add some garlic powder and paremsan cheese to it. Yummy.

Popcorn was also my favorite variety of Scratch & Sniff sticker. The scent of popcorn is hard to beat!

Now THAT's the kind of exercise bike that can get me to the gym everyday!