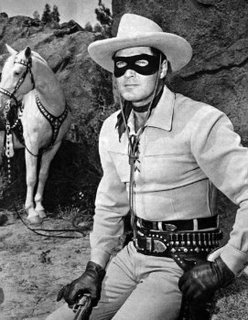 I can still hear the flurry of The William Tell Overture in the background. Then I hear Fred Foy's voice:

....A fiery horse with the speed of light, a cloud of dust and a hearty "Hi yo Silver!" The Lone Ranger. "Hi yo Silver, away! "
....With his faithful Indian companion Tonto, the daring and resourceful masked rider of the plains, led the fight for law and order in the early west.
....Return with us to those thrilling days of yesteryear. The Lone Ranger rides again!

I read recently that there are plans to make another movie about the Lone Ranger. I hope they do a better job this time. The last effort to return the masked man to the big screen was an utter embarrassment.
....While contemplating the idea of new Lone Ranger film, I was suddenly overcome with dread. What if they allowed Ang Lee to get his grubby little paws on the rights? He might even hire E. Annie Proulx to write the screenplay! Horrors!

There will a stirring rendition of the theme from the Banana Splits ! Then you will hear Gary Coleman's voice:

....A swayback horse tripping along, a cloud of talcum and a hearty "Hi yo Lilac!" The Brokeback Ranger. "Hi yo Lilac, away!"
....With his faithful Indian lover, Tonto ...

A daring and resourceful lawyer goes on a hunting trip with Shotgun Cheney to a desloate canyon known as the Hole in the Wall. He finds himself in Cheney's sights and is left to die with birdshot wounds in his groin. A young Indian man happens upon the fallen barrister. At first, noting the injured man was a lawyer, the Indian remounted his horse and said, "Only good lawyer is dead lawyer." In the end, once he realized where the man was injured, the Indian did the wrong thing and helped the man.

He deftly removed the buckshot and suckled the wounded area to remove any possible infections. He slept in the same saddle blanket at nights to keep the man warm. When the man's fever broke and he regained consciousness, the first thing he noticed was a magnificent stud. Smitten, the Indian told the lawyer what he had done to save his life. The lawyer, still weak, was surprised when the Indian pulled down his trousers and demonstrated how he had saved him. He half heard the Indian when he pledged his devotion, "Tonto never leave Kemosabe's behind." The lawyer closed his eyes and dreamed of mounting that big stud. 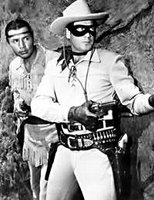 When he was able to walk, the lawyer, who's name was John Ranger, finally got to mount that stallion. Sitting atop the white horse, he looked down at Tonto and asked what the horse's name was. "Him Kemosabe," answered the Indian. Ranger said, "I don't like that name. I think I'll call him Lilac!" Tonto said, "Him belong Tonto." The lawyer looked him in the eye and with his left hand cupped his crotch and said, "If Tonto wants any more of this trail mix, then Lilac is mine." Tonto looked up and replied, "Whiteman make hard bargain. Tonto like trade."

So it was, that the legend of The Brokeback Ranger was born.

(Following are a few interesting things about The Brokeback Ranger.)

....Return with us to those thrilling days of yester rear. The Brokeback Ranger rides again! (Lord help us!)

Curmudgeon responsible for this post: Hale McKay at 7:29 PM

You did it, you really did it. And it was funny, too.

What's this we white man?

Great post, Mike. That was fun. Never leave kemosabe's behind. Gotta love that!

I knew there was something going on with Tonto. Sure hope the horse isn’t involved. haha

Well, jeez! And all these years I always thought it was "Hi ho Silver, away!"

Thanks. It's nice to see someone going through archives and reading the "old" stuff.