Days of Whine and Roses 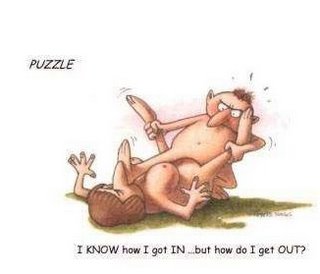 How do I get myself into these messes?

Since it was a miserable rainy day this past Sunday, I decided to break with tradition and tackle a long overdue project. (Sorry Peg, but this isn't a Honey-Do post.)

For some time we have discussed converting our old pictures, slides, and 35 mm reels of film to a digital format so that they can be viewed on the TV through the DVD player or on the computer. While it isn't exactly cheap to have this done, we have decided it is something that should be done.

Making the decision was the easy part. The hard part? We have to sift through the photos and slides to decide what gets to be digitalized and what doesn't. I knew that there would be a second, third and who knows how many more sortings. So initially we started the process by creating three piles: 1) the definite no's, 2) the definite yeses, and 3) the undecideds.

Have you ever tried to sort through pictures and such without getting caught up in the trip down Memory Lane? It was a cinch that this project wasn't going to be completed on a single Sunday. When the cat decided to join in on the fun by pouncing on the piles like a kid into a pile of leaves in the yard, that cemented the fact we wouldn't complete the task that day. Three gallon-sized zip lock bags was used to secure what we had sorted. A tall kitchen bag was put into service as a suppository depository for the remaining pictures. (We never got to the slides. It seems that I had forgotten ((how many years ago?)) that the slide projector needed a new bulb.)

Finally, it was time for Sunday afternoon at the movies! For those of you old enough to remember, how many times did a white sheet or a bare white wall serve as a screen for your 35 mm home movies? (For that matter, do you know how hard it is to find a plain white sheet nowadays?) After adjusting the legs on the projector to get the projector beam to hit the middle of the sheet, trying to remember how to thread a reel of film, and getting the images focused, the preview of our past lives was coming to life on the living room wall.

We were only a third of the way through the first of the "untitled and undated" reels, when I noticed my wife h 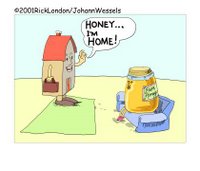 ad become all teary-eyed. I said to her, "It sure does bring back the memories, doesn't it?" Reaching for another tissue she just nodded. I watched with interest as there appeared a scene of us at the beach playing badminton. I thought to myself, "We must have been in our twenties!" We were just dating then. It was a year later when she got her diamond. I got up anticipating a close up of her on the wall-screen. Strategically placing my hand in the projector light, I shadow-squeezed one of her boobs and said, "They are as nice then as they are now!"

I suppose I should have expected the adamant remark, "Pig! Is that all you ever think of?" I also suppose she should have expected my next move as the scene showed her wiggling her cute backside as she was walking away from the camera. This time I shadow-patted her butt. This time I said what I thought was the next right thing to say, "Some things just get better with age."

She was clutching a handful of tissue and I realized she was almost bawling! Wiping away the tears she said, "Look how thin I was!" I glanced at my watch and glanced at the grainy images on the wall. I had just gotten what I hoped was a great idea. I made an excuse that I had to run to the store. I think she was glad that I had chosen that moment to make myself scarce. The first reel was finished and I started another. We quickly realized that this was a reel of film of our wedding. If I had guessed right, once I returned it should coincide with a particular scene coming up on the reel.

Ten minutes later, I walked in at the same moment I was walking in on the screen. (Actually, I was early, heard the voices from the movie and waited until the moment was just right. The sequence on the film was shot by my mother-in-law on my first day coming home from work as a married man. I opened the door and was immediately met with a passionate embrace and kiss. I had in one hand behind her a bouquet of a dozen roses. It was the first of many times that I would open the door and say, "Honey, I'm home."

I bent over and kissed her on the cheek. Then I handed her some roses I had just purchased down the street and said, "Honey, I'm home." I thought it was good idea. I felt my timing had been impeccable. She laid the flowers on the floor next to her and looked up at me and said, "You only got those because I'm fat!" My protests of denial fell upon deaf ears.

We watched the rest of that reel in silence. She got up and handed me the roses and told me to put them in a vase. "I'm going to go lie down for a while." After I had boxed and put away the projector and the bags of memories, I stared at the wall where the images of our past had been. I thought to myself, "What did I do? How do I get myself into these messes?"

I guess it was just one of those Days of Whine and Roses!

No.609
Curmudgeon responsible for this post: Hale McKay at 12:45 AM

It was a sweet thought, and when she gets over her funk, she'll appreciate it.

Awww! I cry too when I look at how skinny I WAS.

I loved watching home movies when we were kids! Dad always set up the projector and mom made popcorn.

It worked for me Mike, who can tell with women? although the Iverson girls seem to think it was OK too.

I do hope she forgave you, though!

ouch! your wife sounds, uh....ummmm...DIFFICULT...lol! i thought trips down Memory Lane were supposed to be nice!

VERY nice try, Mike. But there are times when logic and rationality are completely irrelevant. Sounds like one of those times.

I only have 2 questions; whats a reel and whats a slide?

Still a great idea, Mike, even if the final result was a bit emotional. As Jules says, she'll probably appreciate it more in another setting and time. Women are unpredictable (ooops ... did I just say that?).

Wow, that really got me sad! For you, trying so hard to make her happy; and for her, because it seems she's just wishing she could have back what's in the past. It is definitely hard to see yourself when you were thinner... *especially* if at that time you'd *still* thought of yourself as overweight! I know, sometimes ya just can't seem to win with us women. But if you do your best to empathize, it'll go a long way...