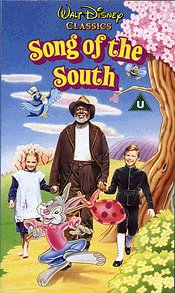 You should never sit at the table after a day of work and discuss your day. Why? It's a waste of perfectly good Blog material.

My good buddy, fellow Blogger, and Hillbilly brethern, Greg, fulfilled a long-standing wish of mine the other day. I'm sure many of you recognized the italacized lyrics above as the famous song from the Walt Disney classic, Song of the South.

My wish? I have longed for a copy of this movie for many years. It has not been seen in theaters since 1986 and was never released on VHS in the United States. Leave it to Greg, to procure a copy of it through e-Bay and to produce a copy for me. I received it on Thursday and have watched it no less than four times since, in less than 12 hours.

I have wanted a copy because not only is it a great film, but it holds sentimental memories.
While I did see it as a kid, the sentimentality doesn't stem from that time in my life, but rather from my adulthood. Many years ago, I bought a hard-bound book "Walt Disney's Story Land" for my daughter who was five or six years old at the time. It soon became a nightly ritual for me to read a bedtime story to her. Of the 55 stories in the book, there was one, the story of "Brer Rabbit and the Tar B

aby," that she loved. Because the story was being narrated by Uncle Remus, the dialog was in a deep-south vernacular. At that time, I still had a lot of my West Virginia accent and I was able to read the story to her with that drawl. It wasn't long before the other 54 stories were not acceptable to her. By the time she had begun to "grow out" of having Daddy read her bedtime stories, I had virtually memorized the entire story.

In 1980, when she was eight-years old, Song of the South was re-released at the theaters. Of course, we took her to see it. She too has been wanting to see the movie again ever since. She'll be here tomorrow to watch it with me for the first time in 26 years. (Well first time for her, fifth time for me.)

Joel Chandler Harris lived among former slaves after the end of the Civil War and wrote down the colorful tales they told him. He created the fictional story-teller Uncle Remus, and compiled the stories in the book, Song Of The South. In simpler and happier t

To me, Disney's screen adaptation of that book, is the best film they ever produced. It's a shame that the sensitivity to the issue of slavery has denied a generation the pleasure of this wonderful film. Scarcely anyone below the age of 30 has had the opportunity to see it. That is unfortunate. I am not insensitive to the subject, but the fact is that the film has nothing to do with slavery beyond the fact that some of the characters were so indentured. Indeed, the scenes with black and white children holding hands and playing together seems to prophesy Dr. Martin Luther King's famous "I Have A Dream" speech, wherein he envisions children, both black and white playing together.

The title I chose for this post comes from the movie. Remus tells us that we all have a Laughing Place of our own. It's that special place, it can be imaginary, that we go to ... Laugh! It's a happy place, a place where you can escape life's t 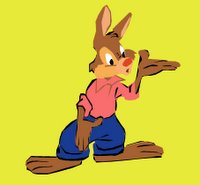 ravails. When life seems to be too much to bear, we need to laugh at our troubles. In our Laughing Place we can all be like Brer Rabbit when trapped and in trouble at the hands of Brer Fox and Brer Bear. When he tricks his nemeses and gets away, he is free to laugh. The wisdom that can be found from his escapes are allegorical lessons of

If you haven't ever seen this film and you have the chance, please do! Set aside any ideas of being politically correct and watch it for what it is. What it is, is a marvelous and lovable film for all ages.

No.606
Curmudgeon responsible for this post: Hale McKay at 1:38 AM

wow i havent seen that movie since i was 9. I feel so used.

Awwww I am so happy you received your very own copy... that is a sweet story. Your daughter will forever remember you reading her stories before bed, you created memories of a lifetime for the both of you.

I remember the book you mentioned. The illustrations were great, and the stories were really quite humorous and filled with lessons.

Great entry, man! I don't blame you for not being in the mood for ramblin' when you come up with good stuff like this! :0)

nice post, Mike. That's so cool that you got your movie. It sounds like a 'happy place' for you. I have my happy place too - they are furry and fluffy and love to give licks and tail wags...

Glad to help, some of these old films are getting hard to come by. I'm glad you like the movie Point, you and your daughter enjoy! :D

Aww, how lovely! So happy for you and daughter - may you enjoy it and the memories!

I’m still fighting WordPress at the new blog, but decided I needed to swing by blogroll buddies and say howdy!

Hope you have a terrific weekend - the weather in the KC area is spectacular!
Hugs,
Marti

Hi Mike, I've not seen the movie but can remember the book well, a great book.
Might I suggest you make a backup copy of the film, you're gonna wear it out pretty quickly the way you're going.

Anyone who loves Uncle Remus and "Zip-a-dee-doo-dah" can't be all bad in my book. Truly.

Mister bluebird on my shoulder~~ it's a fact,it's actual ~~everything is satisfactual~~

Thanks, everyone. I'm glad so many who remember this story chimed in.

Hum...
Sounds like you need to become our ebay..

Mike.. you have some very funny posts.. this was a change.. a very personal and VERY NICE post!