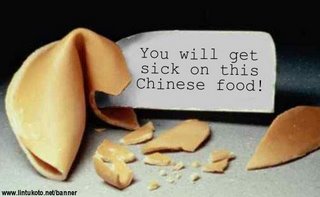 I personally cannot eat Chinese food! I not only get sick, but I experience excruciating pain in the stomach. The pain is so intense that it feels like I am being eviscerated. Only by lying down and assuming a fetal position, can I find any relief. This lasts for about three hours.
....It is ironic, but I like the taste of it. When I catch the smell of it, I am tempted to get some. Forunately, from past experiences I ignore the temptation. No matter what the menu item may be, the results are always the same.
....It was once suggested that I try Chinese food without Msg. Monosodium glutamate, just the sound of it seems to say 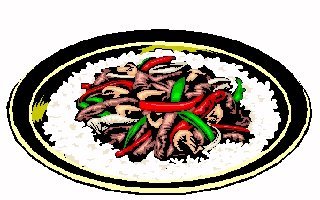 "beware!" Why am I reminded of gluteus maximus?
....In any event, I took a chance and ordered some chicken fingers, sans Msg. The experiment was a failure and we were ten miles from my home. It was a long drive, to say the least. I can never predict how long after eating the stuff before the attacks start, but many times they begin within ten to fifteen minutes.
....Not a single time in 36 years have I ever eaten Chinese food and not had those severe cramps! You'd think that I would have learned a lesson during all those years, but I still test the waters once in a while. All it takes is just one bite!
....I have found that the best way to combat my personal "China Syndrome" is to simply read the menu. I realize it's foreign fare, but where in the world do they find the names they give their food?

....Kung Pao ? Do I eat it, or is it a martial art maneuver? Moo Shu Pork ? I picture a cow telling a pig to screw! Dim Sum ? You mean you have to eat it with the lights turned down? Or does that mean that the cook isn't the sharpest knife in the drawer? I'm sorry, but how can anyone expect me to get excited about a Pupu Platter ? Riddle me this one, could anyone please tell me why anyone would want to eat a baby pigeon?
....Another thing that fails to excite me are the types of food which are based on the regions of the Chinese origins. Hunan ? When I see that in a window or on a marquee of one the restaurants, I cannot help but see "human!" Well, I'm certainly no cannibal. Hakka ? That sounds like you're coughing it back up! Fujian ? Ah, they must specialize in dishes comprised of Japanese camera film? Guang dong ? I can't help but pity some poor castrated orangutan somewhere in the jungle, saddened by his loss.
....They have a saying of the South China people: "They would eat everything that has four legs except the dinner table and everything tha 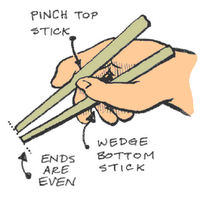 t has two wings except a plane." I'm inclined to say in retort, "I don't doubt it!"
....Chopsticks? What's up with the chopsticks anyway? They can't afford silverware? The kitchen staff must be out back laughing at the various races of people trying to use those things. They could very easily have put a hinge on the two pieces to make them more manageable as I see it.
....I have a few theories on those chopsticks. They are really miniature cue sticks! When they aren't eating, they break out these little pool tables and rack up some tiny billiard balls.
....Don't like that theory? You've seen pictures of those Geisha girls, haven't you? Ever notice those large things sticking out of their hair? Contrary to popular belief, they aren't knitting needles. They aren't antennae either. They are c 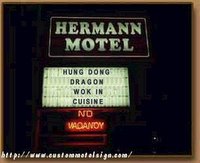 Well, while you are in the Hung Dong Dragon dining on your Pooh-Pooh Platter, I'll head on down the street for some manna. I won't be heading to some building simulating a pagoda, but rather to those glorious Golden Arches. While you are struggling to get more than a pinch of food with your tiny cue sticks, my two hands 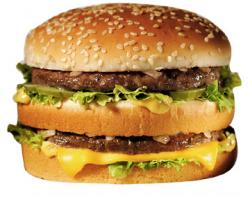 will be caressing two all-beef patties, special sauce, lettuce, cheese, pickles, onions on a sesame seed bun - a luscious Big Mac! While you are sipping your tea, I'll be washing my meal down with a thick shake.

I'm not one to rub it in, but I won't be hungry again in only an hour after I have eaten!

No.630
Curmudgeon responsible for this post: Hale McKay at 12:40 AM

nice one point. hey, I haven't had the first comment in a long time lol.

I wonder what it is that's only in Chinese food that makes you sick (if it's not the MSG).

Personally, I prefer a nice Big Mac myself. And yes, I'll have fries with that. Yum.

I'm with you there Mike, can't handle Chinese food OR chopsticks.

that sucks! I could eat Chinese EVERY DAY. I LOVE IT! I get bad stomach pains when I eat anything with alfredo sauce in it. Which is fine by me because alfredo has so much saturated fat and calories in it, I shouldn't be eating it anyway!

and when I see hunan? I always think human too!

I think it's psychosomatic. Emphasis on the psycho.

But at least you can ignore the chopsticks.

My brother gets sick from it too. I can eat it pretty well, except for those hot sesame seed chicken pieces and that hot mustard. I prefer Mexican food the most, but it can be my nemisis at times ;)

Love Chinese food, but found your post fun. Am I a sadist? Probably, LOL.

You ought to try some homemade Chinese dishes, so that you can find out what makes you sick. My Kentucky Fried Rice recipe doesn't have anything at all in it that you wouldn't get at, say Cracker Barrel.

And you can get chopsticks with hinges, they are made for kids and clueless white men; they are called zoo sticks because they have cute animal shapes.

Just the thought of Big Macs make my arteries seize up! WhenI see the word Hunan, I think "its about time someone had the guts to serve some spicy food around here!"

Crab rangoons are my comfort food. Loved your take on Chinese nonetheless!

Mike...
this might hurt... but I had(have) the same problem with oatmeal..
You need to consume it a few times in a row and then on a weekly basis, ,,your body will get used to whatever is causing the cleanse.

This is so weird! I have exactly the same problem with chinese food and I also thought it might be the msg but it sounds like not...
Best to stick with burgers :)