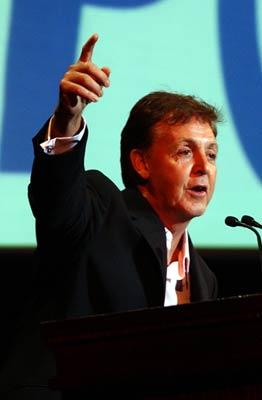 Paul McCartney has recently learned that he's going to be Free As A Bird and sinking on a Yellow Submarine. He finally got an answer to one of his musical questions: "Will You Still Love Me When I'm Sixty-Four?" No Paul, she won't still love you when you're sixty-four! You can take solace though in the fact that you almost got there, since your sixty-fourth birthday is next month.

So next month, when your friends sing Your Birthday, Heather won't be there. You can then sing one of The Beatles' classics, Can't Buy Me Love. It's probably too late for you to sing We Can Work It Out. I wonder if you'll feel like the Fool On The Hill or a Nowhere Man? Maybe you'll go into seclusion in the Norwegian Wood and become a Paperback Writer.

You're Going To Lose That Girl, Paul. She's filed for divorce and she's singing Money (That's All I Want). A quarter of your fortune is what she wants and she's going to Come Together with her lawyer to Come and Get It! "After all", she says to you, "Baby You're A Rich Man!"

When you say, "Don't Let Me Down, I gave you All My Lovin'" she won't be listening. Instead she'll be saying, "It Won't Be Long until I Drive My Car with my Ticket To Ride down The Long And Winding Road and then I'll Follow The Sun out of here!"

"Help!" says Paul. "You Really Got A Hold On Me!" Paul is remembering that "Eight Days A Week ever since I Saw Her Standing There and said to her I Want To Hold Your Hand, and took her down to Penny Lane, we were in love. I thought we had Something special." Except now he says, "She was a Day Tripper and I'm A Loser."

It'll be A Hard Day's Night, but he'll have to Let It Be. He'll have to Carry That Weight and he'll say, "I'll get by With A Little Help From My Friends." He'll ask Heather "Tell Me Why," but he'll get No Reply. He'll make one last plea, " Oh! Darlin', won't you Get Back and Please Please Me and don't you know that All You Need Is Love only From Me To You?

Alas, all he got was stars when Maxwell's Silver Hammer came crashing down on his head!

Curmudgeon responsible for this post: Hale McKay at 12:36 AM

I really can't get worked up about either of them.
Always preferred Romgo and George.
Shame about the baby.

That's Ringo. Oh dear -been up since 5am!

So all that money really Can't buy me love after all, I wonder how Paul wil scrape through with only 50/60 million left.

Happy Friday to you!

Wow! You are the link king! LOL


I haven’t been making it around my blogroll much lately, but trying to play catch up today. Hope you have a great weekend!

Personally, I wonder what the dead Beatle came back as. Heather Mills?

This one really saddened me. I was so happy for Paul when he married again after being so devastated over Linda's death.

Totally awesome! Well put together. I, too, bow to the master.

You've been talking to my ex, haven't you?
Great Post~ as always. ;)

I'm sad for Paul...he always seemed to be "The Nice Guy".
I was sad when Linda died, and here's what I say to Heather: Just because Paul (loved you/trusted you) didn't want you to have to sign a pre-nup doesn't give you the right to screw him over now.
Beotch.
So there.
:P

Nice to know there's a cool rich old guy out there who's available...

btw I bet he has a new young babe in no time.