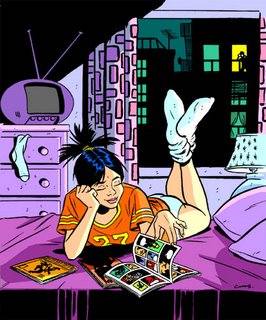 My name is Dick Gumshoe, and I'm a Private Investigator. I was on the clock, conducting surveillance. Mr. Lay, my client, was concerned about his teenage daughter's activities and a recent depletion of his assets. For about a week I had been trailing Freda about town and monitoring her assets closely. I'm sure that Mr. Lay will be quite interested to learn that she has a mole on the inside of her right thigh.

....On this night I followed her to the Museum of Not So Fine Arts, which is located in the theater district, about a block from the seedy red-light area. Waiting outside, I lit up a cigarette and stood discreetly by a lamp post. I was confronted by three ladies of the night in a space of ten minutes.
....I got into a scuffle with their pimp shortly after. It seems that I was standing on their corner. It was getting late and when a fourth propositioned me, I was struck by her innocent look and agreed to party with her. When she led me into a nearby alley I discovered that no one else had been invited. Before I had a chance to protest she was blowing on my candle.
....When she was finished and stood up to face me, I was horrified. It was Freda Lay, my client's daughter. I sighed and thought, I did promise to stay o 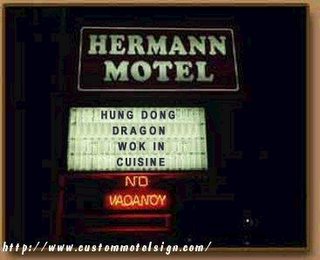 n her tail. I jotted down a few lines in my notebook. I would give Mr. Lay the good news tomorrow. He would be relieved to know that his daughter was taking music lessons and was showing promise as a flutist.

....Before calling it a night, I decided to stop for a nightcap. I like going to a place where they know my name, and a place where i can run a tab. The only such place I knew was the Hung Dong Dragon. I ordered a whiskey with a Jaegermeister chaser. As I was downing my imbibation, I overheard two men discussing the recent controversy over the book and movie, Da Simpson Code.
....According to the book, Homer Simpson is a distant cousin of President Bush. The supposed proof of this was hidden in the famous painting by Great-Grandma Moses. Finishing my drink, I decided to mosey on down back to the Museum of Not So Fine Art. Since the MONSFA was closed at that early hour, I used my personal pass key and picked the lock to 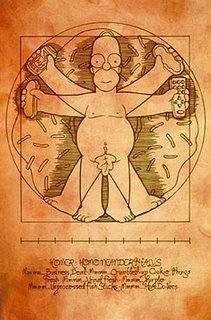 gain entry.
....As I stood before the masterpiece, I realized for the first time that there was indeed a family resemblance. You've probably seen those "Separated At Birth" pictures before, I'm sure. As I live and breathe, I swear I was looking at a painting of our illustrious leader, George W. Bush!
....I then remembered that there was another painting that might be the key to solving the code. It took me a minute, but soon I was gazing at it. Then it struck me like a ton of won tons. The work depicts Homer singing at a concert with the Rolling Stones. The key, that everyone before me had overlooked was right there, in front of me. Only I was able to make the connection. They were singing Moth 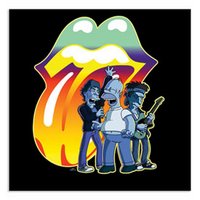 er's Little Helper .
....You don't see it? Think about it. Somewhere in the dark past a woman was experiencing a lot of pain. So the family alchemist, Rasputin the Mad Monk, prescribed a heavy dose of hallucinogenic pain killers to the woman. Those pills came to be known as "Mother's Little helper." She then washed Rasputin's privates so that they could have some very clean sex. Ah, I see it's starting to come to you. The sex was so clean, that the ensuing pregnancy was called an Immaculate Conception.
....Great-Grandma Moses had kept secret the fact that her distant ancestor had spent time in an Egyptian jail for causing enviromental disasters to that country. Thus when she began to paint, she diabolically planted the clues of ancient blood lines. She knew that someday, someone would unravel her code. She also knew that she'd be gone when that day arrived. You can't blame her for not wanting to be associated with any family from that deficient gene pool.
....Suddenly, before I knew what was happening, I was surrounded by a dozen gun-wielding men. They were dressed as cops, but I knew better. They were trying to cite me on some trumped-up charge of tresspassing. I knew, however, that they were after the code too. Refusing to talk, they hand-cuffed me and took me to a warehouse which had been cleverly disguised as a police station.
....I'm sitting behind these bars and while I await my lawyer to bail me out of here, I writing all of this down. My lips are sealed. I have decided, being the patriot that I am, the secret code must never be revealed. It would surely disrupt not only our nation, but the entire world.

(Stay tuned to this Blog channel for forthcoming adventures from the case files of Dick Gumshoe, P.I.)

No.632
Curmudgeon responsible for this post: Hale McKay at 12:50 AM

Hi Mike ~~ What an imagination you have ~ " Da Simpson Code", well at
present "Codes seem to be the talk of the world. Thanks for your visit and comment, fellow night owl!!
Take care, Merle.

Brilliant! So how does he know about the mole? And why would he tell her father about it?

Is it flutist or flautist? And what kind of flute are we talkin' here?

You provide more questions than answers my friend.

I think you've done it again Mike, got onto the sauce before you wrote your post instead of afterwards.

Hi, thanks for visiting and your comments. I'm not going to have time to post tonight, there was a double episode of West Wing, should have recorded it of course, and I had to finish painting the bathroom, and now it's bedtime, so my walter is telling me. cheers jacqui

Megan - a look at the opening picture will show a man with binoculars in a window across from the girl's window.

Peter - Acually before, during and after.

Thanks for the comments Merle and Jacqui - it seems the Holt family is well represented.

Your site is pretty cool. I'll stop by again soon. You should write for the Onion!


Thanks for visiting my blog.

That Dick, he's such a peckerhead sometimes. ;)

I love your stories, Mikey!