Who Laid The Egg? 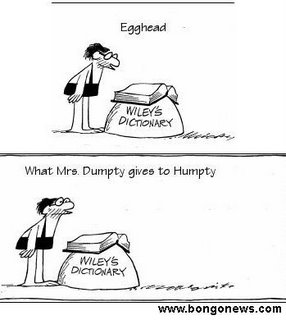 British scientists have "cracked" the age-old riddle, which came first - the chicken or the egg?
....The scientists, teamed up with a philosopher and a farmer, who is the chairman of the Great Britain Chicken Trade board, have answered the enigma that has bewildered the world, according to The Independent Newspaper of London.
....The "egg-sperts" explained that a creature's genetic material does not change during its lifetime. Any changes or mutations to a creature must happen when it is conceived, at the point when the two genetic codes are combined.
...."Therefore, the first living thing which we would say unequivocally was a member of the species would be this first egg," said professor John Brookfield, a specialist in evolutionary genetics at the University of Nottingham. "So, I would conclude that the egg came first."
....The same conclusion was reached by professor David Rapineau of King's College London, and Charles Bourns, a poultry farmer. Papineau, whose subject is the philosophy of science, agreed that the first chicken came from an egg.

Leave it to the British to claim credit for a supposition that has been offered and generally accepted in most scientific circles for quite some time. So eloquent were their conclusions, that only a fly on the wall could provide some insight into those historic sessions that spawned this daring theory.
.
...."Hello. Frederick Fly III here. There wasn't much happening on the other side of the Thames at White Hall, and the same can be said for Buckingham Palace. There was a lot of buzz from my fellow flies that history was about to be made in this hotel room. I got here just in time. The chambermaids are straightening out there uniforms and are leaving the men as they start their meeting."

....Bourns, the poultry farmer was the first to speak. "Gentlemen, we must be pragmatic here." I chuckled as I observed one of the scientists looking around as if he wondered who walked into the room. Bourns continued, "From my experience, the only thing that has ever hatched from one of my hen's eggs is another chicken, albeit a baby one."
....The philosopher stood and shook his finger, "Now I ask you, Mr. Bourns, did you question that newly hatched creature? Did you get a sworn deposition from it, that it was in fact ... a chicken?"
...."Of course not," replied the farmer. "That's preposterous, thinking a chicken would submit to such a line of interrogation."
...."Gentlemen, gentlemen," interrupted Brookfield who specialized in evolution, "All of you are presupposing that the creature that laid the egg ... was a chicken."
....There was hush that spread like a pall through the room. "I was stunned myself. I set my wings in motion and moved to the other side of the room so that my multi-faceted eyes could get a better view of these proceedings. I was salivating from my proboscis."
...."Haven't we learned enough in our illustrious history that mixed breeding is fraught with peril," said Papineau. "My God, people, you need only to look within our own empire and no further than the Irish."
....The farmer jumped up and in angry retort exclaimed, "No Irishman, or Scott for that matter, has been anywhere near my chickens!"
...."No one is suggesting that humans have been diddling chickens!" said a scientist from the back of a room. "But it might answer another riddle about chickens."
...."You don't mean 'Why did the chicken cross the road?" do you?" asked the philosopher.
...."Hell, I'm just a common housefly and I knew the answer to that one. The chicken crossed the road because he was stuck on the Frenchman's dick."
...."Gentlemen, we need to get serious here out of respect to the Queen," said the evolutionist, admonishing the men.
...."You're right, Brookfield. Lord knows the Queen has laid several bad eggs, what with those pitiful scrambled heirs of hers."
...."It's near tea hour," offered Rapineau, "Let us put our heads together. We need to draught up a statement for the press and not put all our eggs in one basket, so to speak."
...."Look," said the philosopher, "If we take an egg and drop it into a pan of boiling water, do we not get a soft or hard boiled egg, depending on the length of time it is allowed to boil?"
...."By Jove! You've got it, Mr. Papineau!" exclaimed Brookfield. "Your theory is sound and beyond reproach."
....I could tell by the look on his face, Papineau had no clue as to what Brookfield meant.
....Brookfield continued, "Look, for the purposes of arguement, let us suppose the egg that was boiled was laid by one of Mr. Bourns' chickens. When we break the shell from that boiled egg ... what do we have? A boiled egg, of course." He paused for dramatic effect for but a trice, "Obviously an omelet didn't lay that egg..."
....Papineau jumped in, "That which was in the egg ... changed during the boiling process. It started out as a potential baby chick, but was removed from the shell as ... breakfast!!"
....It was contagious, the thought processes were running wild within the minds of the men in that room.
...." So, a long time ago," added the farmer, "This dinosaur laid an egg in its nest, but on one fateful day a chicken and not a Stegosaurus hatched from the egg."
...."Hence, the first chicken," said Brookfield.
....I watched them shake hands and slap each other on the back. It was obviously time to celebrate as they began pulling the Champagne from the ice buckets around the table.
....In unison they raised their glasses to a hearty toast, "The egg came first!"

....As I flew out of that stuffy room, I couldn't help but wonder, "Which came first, the egg or the British?"

No.642
Curmudgeon responsible for this post: Hale McKay at 7:40 PM

I think you had to have been there. Then it would be all clear.

Of course the egg came first, its been obvious all along. Fish lay eggs. Reptiles lay eggs. Chickens aren't the only ones who lay eggs. Don't tell the grocer, though!

Love the cartoon. I need to start a scrapbook with all your "dirty" funnies, Mikey.

I think, therefore I egg?
~snicker~

Hope you're having a great Memorial Day!