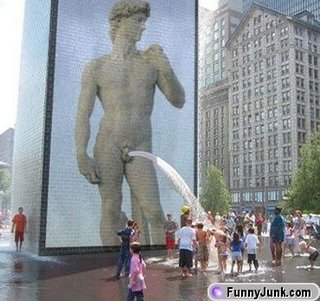 Today it felt like there was a "battle of the bands" going on inside my skull. The cranial concert began innocently enough this morning. I don't remember what product was featured in the commercial, but the background music was "California, Here I Come."
....Ordinarily that isn't the type of song that sometimes get stuck in my brain. Having said that, I am often wont to parody song lyrics. So I began to sing along with the commercial, but with my own twist to the lyrics: "Calamari, Here I Come ..."
....I was rescued from that tune by the next commercial. The song for that commercial has been around since I was a kid, and I have been using my own words even then. "I wish I were an Oscar Meyer wiener, That is truly what I want to be..." Then I take over the mike: "Coz if I were an Oscar Meyer wiener, Everyone could take a bite of me!"
....I won't ask if you have ever had a song "super-glued" to your brain - I know you have. We all have. If you are particularly susceptible to this phenomenon, you may want to avoid the rest of this blog. 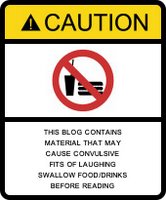 ....Warning! Several more song titles and annoying lyrics will be presented in this post. The author is not responsible for any residual lyrics left in your head.
....I find it curious that a lot of those "glue" songs are usually dumb, silly and nonsensical. Many of them are either novely songs or commercial jingles. Perhaps, the dumber the song the more ingratiating it becomes, so much so that it imprints itself in your mind. Hence, my personal defense mechanism is to destroy it in parody.
....From the voice of experience you guys out there, you might want to avoid singing cheerfully along with a certain Kid Creole and the Coconuts' song. My animated, finger-snapping sing-a-along to the following lyrics did not win me any points with my wife. "If you want to be happy for the rest of your life, Never make a pretty woman your wife. So from my personal point of view, Get an ugly woman to marry you." Get my drift? That song tends to stick in my head every time I hear it, but I am no longer demonstrative when I sing along.
....Harry Nillson, I like your music, but "Put the lime in the coconut?" Melanie Safka, don't you wish you could take back "Brand New Key?" Maria Muldaur, have ever had that awful feeling you get when fingernails are run down a blackboard? That's how I feel everytime I hear "Midnight At The Oasis." I find that all three of those songs get under my skin and alas, to add to the torture, they get stuck in my head.
....It isn't just songs that you don't necessarily like that take up residence in your brain. Quite the contrary, there are "okay" songs that stick too. Any song that tends to replay in your head came become tiresome. It doesn't matter whether you like it or not. You just want it out of your head! ("Ding Dong, The Witch Is Dead.")
....I like Australians, but did they have to give us "Tie Me Kangaroo Down Sport?" How's your appetite when you hear "Yummy, yummy, yummy, I've got love in my tummy?" Why have we had so much rain on the Atlantic seaboard this Spring/Summer? ("Ah, ah. Oh no, don't let the rain come down, Coz my roof's got a hole in it and I might drown.") This one makes me a little merciless: "Do you really want to hurt me.." Yes, Boy George. Very much!
...."I Shot the Sheriff." It's okay Eric Clapton, everbody is entitled to a mistake every now and then. Look at how many David Bowie has made. 'Bend me, Shape me, anyway you want me.".. Do you like to gamble? "You gotta know when to hold them..."
A favorite: "I'm flying high in my taxi, Taking tips and getting stoned..." Speaking of flying: "10-20-30-40-50 or more, The bloody Red Baron kept running up a score." Before you know it, the songs start bouncing around within your skull like a "Red rubber ball."

....Now that I have thoroughly messed up your respective heads, perhaps you have experienced some of these glue songs that you would like to share. Look at it this way, you might plant them in my head as payback! Every one of those songs and lyrics were in my head at some point during the day. What's in my head now? Remember the one-hit wonders The Seeds? "You're pushing too hard, Your pushing too hard on me."

No.672
Curmudgeon responsible for this post: Hale McKay at 12:21 AM

Bare Naked Ladies - If I Had a Million Dollars.... Need I say any more. Great post. I enjoyed the sing alone.

We sang "Ding Dong the witch is Dead" at my mother in law's funeral. (quietly, of course, but I wasn't the only one singing it)

Hi Mike, a novel approach, Paperback writer, re Tie me kangaroo down sport, the answer is YES, as the alternative was to keep it !!!!

Now, see, I like "Midnight at the Oasis". I wonder why?

The one I don't like is "Is there chewing gum on the bedpost?"; it is a total waste of time.

I remember all of those. Man did memories start flowing.But you left out the best song of all the "Ding-A-Ling song. That one and "Grandma Got Run Over By A Raindeer" are classics.

I adapted the oscar mayer song when my baby boy was born:

Oh, well, we thought it was cute!