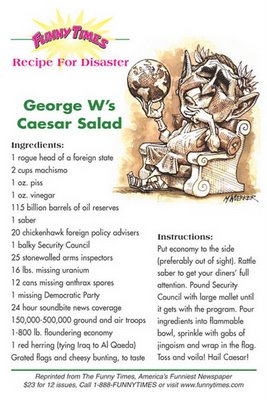 It's been a while since this Blog has bashed our illustrious President, ...er..Commander-In-Chief, ...er..fearless leader,...er..Don't tell me! I'll think of one!
....Weasel in Washington? Wannabe Warlord?

George W. Bush, when home in Texas, likes to act like a Texas cowhand. One day he went riding on his horse into town on a hot, dry, dusty day. The local sheriff watched from his chair in front of the saloon as the "cowboy" wearily dismounted and tied his horse to the rail a few feet in front of the sheriff. "Howdy, Mr. President," said the sheriff.
...."Howdy, Sheriff," said cowboy Bush..
Dubya moved slowly to the back of the horse, lifted its tail and placed a big kiss where the sun doesn't shine. He dropped the horse's tail, stepped up on the walk, and aimed towards the swing doors of the saloon.
...."Hold on there, Sir," said the sheriff. "Did I just see what I think I saw?"
...."I reckon you did, Sheriff. I got me some powerful chapped lips."
...."And does that cure them?" the sheriff asked.
...."Nope, but it keeps me from lickin' 'em!" 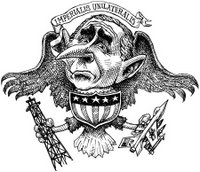 Here is a look at the proposed new Presidential Seal as drawn up by the Bush Administration. It evokes a powerful message of military dominance, oil dependency, and anarchy.
....The White House cartographers have been busy drawing up a new map of Iraq. There has been a proposal to change the name of the capital city from Baghdad to Bagmom in honor of the matriarch of the Bush clan. 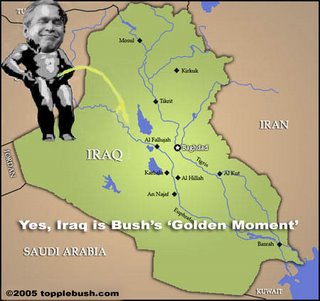 ....The Iraqi people are divided on having one of the oldest cities on earth renamed after a fat old broad.
....When expressing their worries that the U.S. might wish to annex their country, Bush said, "We already own it. It's a sub-division of Exxon/Mobil."
....Sensible Iraqis (excuse the oxymoron) admit that there is in fact a WMD. That Weapon of Mass Destruction however, is not in Iraq. It is seated in the Oval Office in Washington. (Click 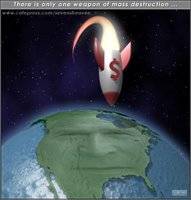 the image for a larger view.

Some of you must remember a fellow blogger, Rhiannon. Well, she's back! She has a post to protest the war in Iraq and to promote peace. She would like visitors to leave her a comment on our feelings in this matter. Why not at least pay her a visit to say hello? 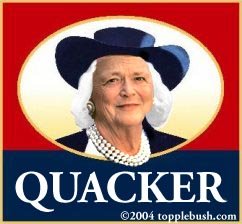 Meanwhile in news closer to home, the Quaker Oats Company is retiring its long time Quaker trademark. In a nationwide search for a replacement, they found their "man." As soon as she donned the hat, they knew they had their Quaker. Barbara Bush's resemblance to the original Quaker was so dead-on that corporate officials feel that many people will not realize the change.

Curmudgeon responsible for this post: Hale McKay at 12:17 PM

Funny stuff today...although you knwo you made the FBI watch list (if you weren't already there)

LOVE the "Golden Moment". I could almost believe he'd actually do that. I mean, gosh, if he'd rub the shoulders of the German chancellor (or whatever her title is), he'd do almost anything gauche, wouldn't he?

Thanks for coming to my blog and your comment Hale. I hope you will come back and continue with your wit of words! I am continuing my "Stop The War" Blog Protest and "Love and Peace" Rally past today and will extend it until who knows when? As long as people continue to participate I'm not stopping!

P.S. I'm regretting that one of my favorites is Ceaser Salad, but I like my ingredients better. Let's just "Toss" that Bush out of the white house and the equasion!..;)

I hope all is well, despite your country's (the world's, I suppose) leader...

But I kid, of course. I have no evidence that he's gay...just dumb.

Isn't it terrific that whenever anybody writes "Dumbya," everybody else knows exactly whom you mean.

Hah,Bush pissing on a Gold mine