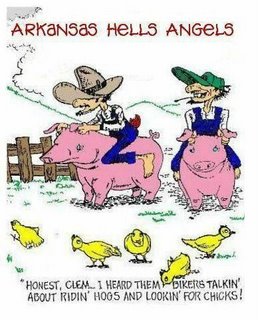 For my 700th post I find myself in a quandary. What should I write about? I could try to be serious, but it's hot and I don't feel like expending that much energy on thinking. I could try to post something funny, but that wouldn't be different. Should I extol the virtues of prolificy? No, the fact that I've put up 699 previous posts hammers home that point.

Salvation came from Oz. While following the "Blue Brick Road," my Blogroll, I found myself down under at Peter's Site. The illustrious and funny Aussie never fails to bring a smile to my face. Believe you me, as I have a face tailor-made for radio, a smile is indeed an improvement as well as a renovation.

One post in particular about drivers hit home. I qualified for two of the listed types of drivers in the post; a Bostonian and a West Virginian. To paraphrase some Neil Diamond lyrics, "Boston is fine, but it ain't home. West Virginia is home, but it ain't mine no more," just about describes me to a tee.

I can relate to two worlds, that of a Yankee and that of a Redneck! As the person in that song, I have at times found myself lost in both of those worlds. They are truly worlds apart. I consider myself lucky to have been able to find humor on both sides of the Mason-Dixon. What follows are some comparisons/differences of those two worlds.

The differences in the sentiments from the North to the South is well defined in:
ROAD TRIP:
Four women were driving across the country. Each one was from a different state: Idaho, Nebraska, Florida and New York.
....Shortly after the trip began, the woman from Idaho started pulling potatoes from her bag and throwing them out of the window.
...."What the heck are you doing?" demanded the Nebraskan.
...."We have so many of these darn things in Idaho, I am just sick of looking at them!"
....A moment later, the gal from Nebraska began pulling ears of corn from her bag and tossing them from the window. ...."What are you doing that for?" asked the gal from Florida.
...."We have so many of these things in Nebraska, I am just sick of looking at them!"
....Inspired, the gal from Florida opened the car door and pushed the New Yorker out.
OUR DAILY BREAD
Two elderly men, one from West Virginia and the other, Boston, were having a conversation about sex.
....Elmer, the West Virginian says, "Yes, I did it three times last night with a 30-year-old!"
....The Bostonian replies, "You're kidding! I can't even manage to do it once. What's your secret?"
....Elmer said, "Well, the secret is to eat lots of whole wheat bread. I'm not kidding!"
....So, the second old man rushed to the store. The clerk asks the old man, "May I help you?"
...."Yes, I'd like four loaves of whole wheat bread, please," he said.
...."That's a lot of bread. It's sure to get hard before you're done!" the clerk remarked.
....The Boston man replies, "Damn! Does everyone know about this except me?"
WALKING
A woman from Texas is visiting her sister in Boston. Over lunch, their conversation turned to men and sex.
....The woman from Boston, sick of her sister constantly bragging how everything is bigger and better in Texas decides to get the upper hand and says to the other, "The men are just wonderful hunks up here. They just walk up and stick it in."
....Unimpressed, her sisters replies, "Hell, that's nothing. The men in Texas stick in and then walk up."
A TIP OF THE HAT
At this time, I'd like to thank everyone who reads my posts and leaves their kind comments. I also wish to thank the lurkers, who "drive by" without leaving comments. All of you have made the effort to post so often, worthwhile. I hope the next 700 are as enjoyable for me to post and for you to read.
No.700
Curmudgeon responsible for this post: Hale McKay at 12:42 AM

Congratulations on 700! Thats a lot of writing, what, about two years worth? Your North and South reminds me of stopping in New Jersey for breakfast. In my border state of Kentucky, the waitresses ask "potatoes or grits?" In NJ, she asked "hash browns or potatoes?"

What was I supposed to say?

That's a difference I can remember Mike.
Thanks for the plug, you are to kind, and bloody funny too.

Congrats on your 700 posts...that's quite an accomplishment. I love reading your jokes and the north & south comparisons were exactly right. Keep up the good work and keep posting.

I used to be a lurker by now I'm a reformed commenter.

Congrats, and keep 'em coming (so to speak) please.

Wow! 700 posts - that's amazing! My congratulations to you and best wishes for many, many more!

Thank you for sharing so much fun and laughter with all of us!

LOVE the bread joke, Mike. I am up to about 670 posts, so I am not far behind you. Congratulations.

Keep up the good work.

Hey, I'm finally back online. They'll be a fresh post this Monday. Thanks for your patience.
Doug

Mike, you need to come abck and see the rest of the post. I was writing the second half when you visited the first. (Thanks)!