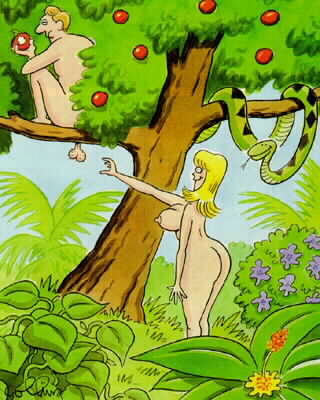 Is it possible that Eve was a blonde? Maybe Adam was blond.

I mean, how do you get kicked out of Paradise? Think about it, they weren't attracted to each other until after their genitals were covered with fig leafs! You mean to tell me that their parts weren't functional until they ate an apple?

Adam had in easy reach some juicy melons. Eve had her pick of a banana or some nuts. Why would they have any interest in an apple tree in the first place? It is said that there was a snake in that tree, right? That's all the more reason to avoid it.

As for the snake, maybe it played a part in the scheme of things in the end. With a woman around, it wouldn't have taken long for her to recognize the fashion possibilities of snake skin. 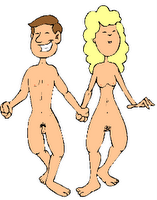 All she had to do was to wiggle her assets in front of the guy and he'd do anything to please her. It wouldn't have been long before she was sporting a brand new snake skin belt and snake skin garters.

The original sin? They brought about the extinction of the legendary apple snake. I have my doubts that there ever was an apple snake. I base that on the knowledge that the tree could not have been an apple tree! What makes me say that, and what proof have I? It's quite simple actually. Johnny Appleseed wasn't born yet and wouldn't be for several millenia. Without Johnny Appleseed, there are no apple trees.

It isn't that hard people. You have to think laterally, just like the Pointmeister. I aim to help you understand the differences between Creationism, Evolution and the Law of Supply and Demand. Now that we've ruled out apples and oranges, what kind of tree was it?

I submit for your approval that it was a nylon tree! That's right, a nylon tree. There was a day when that the tree came to fruit, and it was covered with nylons. That brings us back to the original sin and Eve. Being both blonde and a woman, she wouldn't have been able to resist the feel of that luxurious fruit upon her skin.

Imagine if you will, Adam watching her putting on and removing those nylons. Imagine Eve pleased when she saw how a certain part of Adam reacted to her performance. Imagine Adam assisting her to put them on and to take them off. Adam was a lucky man. Back then there were only stockings. There were no panty hose!

Now there was most certainly a snake in this tree. Leave it to Adam to figure out that he could use the skin that the snake shed every now and then. It was a no brainer that he would fashion the skin into a support to hold Eve's hose in place. Her nylons would no longer slip down her leg. Eve was the benefactor of history's very first garter belt. Though it is needless to say, Adam was a benefactor also. 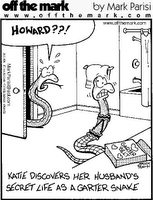 As for the snake, if you haven't guessed already, it has survived to this very day. Once known as the hose snake and the nylon snake, it is a common garden variety snake today. It may be indirectly responsible for the first man and woman to get kicked out of Eden, but it is said that every other species of snake have a latent desire to be - a garter snake!

The original sin? They didn't know the difference between apples and oranges.

Why were they cast in exile from paradise? You might say that they hosed the Creator!

No.692
Curmudgeon responsible for this post: Hale McKay at 10:03 PM

Imagine if you will, Adam watching her putting on and removing those nylons. Imagine Eve pleased when she saw how a certain part of Adam reacted to her performance.

Imagine Adam sying with some alarm, better dtand back Eve, there's no telling how big this thing is gonna get.

That was great! Thanks for the giggles!