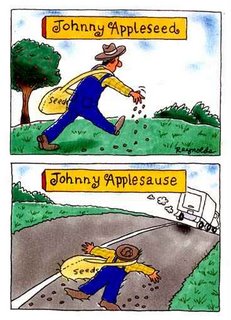 Johnny Appleseed, nee John Chapman, is a well known and loved figure in American lore. Although he did not literally cross the country spreading apple seeds in his wake, he is nonetheless responsible for the wide range of the apple trees across America.
....Chapman purchased large plots of land in what would become the states of the Midwest. During the late 1700s and well into the 1800s, he planted orchards of his apple trees. Westward traveling settlers would purchase his trees and take them along on their treks.
....After an orchard had been established, he would leave the land under the charge of a nearby settler who maintained it for a share of the profits. Chapman would then purchase more land to the west and start another orchard.
....The varieties of apples would be developed years later. The spread of the trees was further attributed to wild animals, such as deer and boar, which would carry the fruit far and wide. The seeds, deposited in the ready-made fertilizer of the animals' droppings, began to appear in the wild.
....Before he died in 1847, Johnny Appleseed had become one the New World's first millionaires. However, he continued to lived as a pauper and gave away most of his wealth.

Johnny Appleseed had a little known contemporary. He too crossed the country spreading seeds, but the fruit of his labor was not as well received.
....Jim Dandelion was a lover of tea. Ever since the days of the Revolutionary War, he had been inspired by his countrymen who had dumped the highly taxed British tea into Boston Harbor. Spurred into action

by the Boston Tea Party, he began promoting dandelion tea.
....Familiar with the work of Johnny Appleseed, James Shlabotnik followed in his foot steps. He spread his his seeds all over the landscape of the early U.S. He reveled at how easily the seeds could be scattered just by blowing on the flowers. Of course nature's own winds help spread his beloved plant for miles upon miles.
....Later acknowledged by the U.S. Department of Agriculture, he tried to educate the people of the benefits of he dandelion. Dandelions are more nutritious than broccoli or spinach, contain more cancer-fighting beta-carotene than carrots, and are a rich source of calcium, iron, magnesium, potassium, thiamin, riboflavin, lecithin, and dietary fiber! All parts of the dandelion; leaves, flowers and roots are edible, each in their own season. 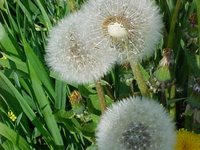 ....The young, tender leaves of dandelions can be eaten as cooked greens, used in salads, gravies or in a variety of baked dishes. Pick the tender leaves before flowers bud or else they will become bitter.
....Dandelion flowers, from which the bitter stem and green parts need to be removed before using, can be dipped in batter and fried to make fritters or boiled for jellies as well as used in muffins and wines. Harvest dandelion roots during the fall and winter months. Cleaned, roasted and ground up, dandelion roots make a coffee-flavor, caffeine-free base for hot or cold beverages.
....Much maligned, the dandelion is now considered a weed to most Americans. So prolific is the plant, that it will grow virtually anywhere. Jim Dandelion's legacy is cursed by gardeners and lawns keepers all over the country.
....James Shlabotnik is only remembered in some small circles today. Little is known of his life. Perhaps there is one legacy for which he will be always remembered, and even that knowledge is obscure to most. His last known surviving relative was his grandson, Joe. Many of you will remember Joe Shlabotnik as Charlie Brown's favorite baseball player!

There are other contemporaries of Johnny Appleseed. They include Jessie Ragweed, Mary Kudzu, Daniel Clover, and Catherine Crabgrass. They are perhaps stories for another day.

No.697
Curmudgeon responsible for this post: Hale McKay at 10:02 PM

Wow, I never knew history could be so interesting....or so made up!

Please tell me Jim and Johnny were twins separated at birth!

so glad you dropped by my place so i could come check yours. funny stuff you have here! glad to find you. i scrolled thru priors as well. love the humorous fiction intertwined with actual fact. good reads.

I have to go with Lime on the humorous fiction, not so sure about the actual facts???