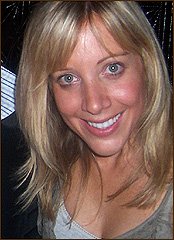 The following post contains some excerpts from the Boston Herald of Friday, 8/25/06. The story was featured in the gossip column, Inside Track by Boston's duo of "dirt-meisters," Gayle Lee and Laura Raposa.

Cranston, Rhode Island native Sarah DiMuro, 29, is a virgin and she would very much like to be "Touched For The Very First Time" before she turns 30, preferably by a Red Sox fan.
....So in a quest to lose her virginity, she is asking the editors of Jane magazine to line her up with some action. ((Has she ever heard of a bar or a night club?))

“When I was growing up I was kind of geeky. I had braces and acne and liked to do things like watch old movies and study,” Sarah told the Track. “My parents were my best friends.”
....Sarah went to the posh all-girls Lincoln School in Providence, graduated from all-girls Smith College in Northampton and lives in an all-girls residence in New York City where men aren’t allowed past the so-called “courting parlor.” ((Come on, where there's a will, there's a way!))

....“The rent is incredibly cheap,” said Sarah, a personal assistant at a gourmet baking company who moonlights as a stand-up comedian. ((Still waiting for HBO to come calling? After all, they picked Rosanne Barr once.))

...."I kind of missed the boat,” she said. Sarah didn’t kiss a boy until she was 23 and she won’t discuss her alma mater’s rep for being the kind of school where a gal in her shoes might feel right at home. “What happens at Smith stays at Smith,” she joked.
((Hmm, girls will be girls?))

....Sarah has signed a legal document attesting to her chaste condition and, in return, the Jane gals have vowed to get her deflowered. They’ve posted a video on their Web site asking men - or friends of eligible men - to nominate candidates to help rid Sarah of her virginity. ((By the way, what's wrong with e-Bay, Craigs List or Overstock.com?))
....The applicants will be screened by the Jane staff and each week pictures of three guys will be posted. Then readers will pick one of the three for Sarah to date. Both Sarah and her escort will blog about their adventures and the fun continues until she meets Mr. Right.
....Things haven’t exactly gotten off to a fast start. Sarah’s first date was with a guy named Lucky and, well, she didn’t get Lucky. “We really didn’t have anything in common and I wasn’t attracted to him at all,” she said. ((Am I missing something here? I thought she was looking to get laid! You know, "Wham bam, thank you ma'am."))

So what kind of guy is Sarah looking for? ((Besides a Red Sox fan?))

....Sarah said her parents are completely behind her decision to go public with her need for a guy. ((Sure, they want grand children before they die.)) And she looks at the whole search as a way to meet men she otherwise would never encounter. ((Girl, you need to get out more often.))

....Check out the Virgin Chronicles at www.janemag.com/virgin. BTW, Sarah turns 30 Nov. 7 and if nothing changes, in 10 years she’ll be a 40-Year-Old Virgin! ((I see Gayle and Laura can count.))

....((I just noticed that "young, tall dark and handsome" were not mentioned in her criteria! By Jove, I'm still in the running!))

The line forms here, guys! (The links above will take you to a blog that chronicles her dates, and allow you to vote on the men she dates, if you are so inclined.)

Curmudgeon responsible for this post: Hale McKay at 8:40 PM

Great posts...
I am trying to adjuts to your new look..
Sex post was so funny...
Thanks for the laughs....

Won't that just be such a SPECIAL memory of her first time? What happened to doing it in the back seat of the car like the rest of us?

And doesn't she know any guys who have their own apartments or whatever?

She doesn't seem like the brightest bulb in the box...or maybe she's really not that interested in the sex part. :D

Or maybe she's a closet lesbian.

Myself, it sounds like she's looking for attention and notariety! Can a book deal be far off? She looking for a Lifetime Network movie deal?

Come on, people, if a girl wants to get laid that desperately, there are "volunteers" aplenty out there.

I agree - big publicity stunt. There has to be some money to be made out of this!

Back seat of the car? What about the glider on the front porch, just before dad comes out to see what is happening?