What's all this fuss about Pluto, anyway? I mean, I could've told you that Pluto is not a planet.

"Pluto has never been interested in astronomy before, other than maybe an occasional howl at the moon. Hyuk! Hyuk!" said another source.

With Pluto being relegated to the status of a dwarf planet, the Seven Dwarfs have stepped forward in support of Mickey Mouse's pet. Snow White, speaking in behalf of her diminutive team of miners was quoted as saying, "Although we think it's Dopey that Pluto has been downgraded to a dwarf planet, which has made some people Grumpy and others just Sleepy, we are not Bashful in saying we would be Happy if Disney's Pluto would join us as the eighth dwarf." As the dwarfs nodded in approval she finished her press conference by adding, "We think this is just what the Doc or

dered and is nothing to get all Sneezy over."

One amateur astronomer on hand claimed that the discovery of the ninth planet, Pluto in 1930, did not happen the way it has been recorded. Clyde W. Tombaugh saw Disney's Pluto before he discovered the distant planet. The cartoon fresh on his mind, he named his discovery after the featured canine, not the other way around. When reminded that the planet was discovered in 1930, one year before Pluto appeared in the cartoon, the man said Mr. Tombaugh must have seen a sneak previe 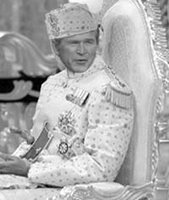 The worlds of Astronomy and Entertainment were not the only arenas making news with references to the films of Disney. In Washington, D.C., another classic Disney film came under fire. Claiming "I'm the only king," George W. Bush has called for a ban of the films and the stage play based on the "Lio

The Man Who Would Be King said, "There can only be one king. This is not a Pluto-cracy." When told the real meaning of a Plutocracy, Dubya replied, "Shh ... Someone might hear you."

"Further more," Dubya added, "I want to pass a bill that would ban Winnie the Pooh from our society." Upon being asked to elaborate he said, "What's wrong with you? I am trying to protect the honor of my valuable staff. It is obvious that the Pooh Bear is an insidious caricature of our Vice President, Dick Cheney."

When one reporter stated that he thought Cheney more closely resembled Elmer Fudd, the President smiled and said, "So do I. That's a compliment. They are both feared hunters." With an ear-to-ear grin he added, "Elmer is the ultimate political character out there. He look 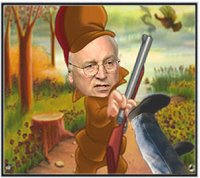 If all those scientific minds had realized the can of worms they were going to open, maybe they would left well enough alone. The fallout from reclassifying Pluto's stature in the Solar System has had far-reaching ramifications.

All I can is:
Keep your pants on before they start messing with Uranus!

No.729
Curmudgeon responsible for this post: Hale McKay at 8:14 PM

our post is better, but mine was 20 hours earlier!

Nice new look, and I'm always happy to contribute to the "pies in the face."

This is the fourth Pluto post I've read today. If they ever take Uranus away, we're in real trouble.

Hale, you have done it again. Kudos, yuks, guffaws and a giggle or two.

Awwwwwwwww a great post but damn they better leave Minnie alone is all I have to say because then all us females will get in an uproar----imagine that holy shit :)