Screwing Up The Oldies 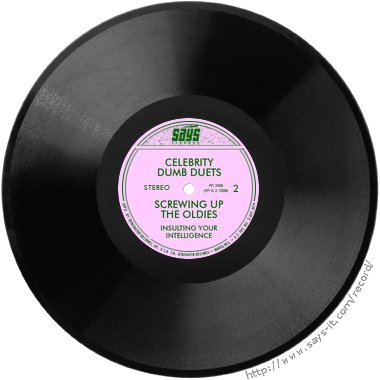 Due in no small part to the success of the One Hit Wonders concert on August the 1st at 1600 Pennsylvania Ave., Pointmeister Records™ has put together a new collection of celebrity recordings.

Warning: These songs are not for fans of good music. Mono-syllabic voices may cause headaches. Nose-bleed may occur if someone throws this disc and strikes you with it. Not intended for use as a Frisbee™. Do not use as a trivet, as hot pots and pans may cause it to warp, further distorting the music. Playing this record at a party may cause mass exodus of Rap fans.

CELEBRITY DUMB DUETS: SCREWING UP THE OLDIES© is currently only available in the nostalgic 78 RPM format. (Pointmeister Records™ might be a fly-by-night outfit, but we aren't about to get stuck with a bunch of expensive CDs that nobody will buy.)

Trust us, this is music that you can really sink your teeth into. (Caution should be exercised as these records will break.) Your favorite and not so-favorite celebrities have agreed under protest to team up for this compilation of some of the most beloved hits of all times. (Well, they used to be.)

You'll hear Barbara Walters and Elmer Fudd harmonizing to the beautiful lyrics of "Bwidge Ovah Twoubled Watahs." (Jumping off a bridge just might get this song out of your head.)

Tears will come to your eyes when you hear "You Don't Bring Me Flowers Anymore" as the duet of Fran Drescher and Fozzie Bear sing their hearts out. (...Before you have a chance to rip them out.)

James Earl Jones teams up with Rosanne Barr for a stirring rendition of Meat Loaf's "Paradise By The Dashboard Lights."
(You can almost feel the goosebumps as they reach that cresendo at the song's end.)

You will want to tap your feet and snap your fingers as Arnold Schwarzeneggar and Edith Bunker team up for a rousing version of "Don't Go Breaking My Heart." (You might want to break a few things too, including this record.)

The Righteous Brothers who? You might not ask that question, but you'll certainly have a few others when you hear Arnold Horshak and Archie Bunker belt out the ultimate break-up song, "You've Lost That Lovin' Feeling." (Your significant other might be thinking break-up if you play this song too often.)

Remember our President who liked to turn over a page? Well pass out the cigars, Bill Clinton is reunited with America's favorite humidor gal Monica, to entertain you with that classic from Grease, "You're The One That I Want."

The unlikely duo of Henry Kissinger and Charo will surprise you. (What were they smoking?) You'll never again hear "Islands In The Stream" sound like this. (Thank goodness.)

Two of America's favorite pigs, Miss Piggy and Teddy Kennedy will take us "Up Where We belong." (To the Mental Institution?)

You won't believe what you're hearing when you place this record on your record player and listen to these twelve hits. (We didn't, and neither will your neighbors.)

Why Buy This Record? You're sure to be the only person on your block to own a copy. It will make an excellent gift if you are tired of giving out Chia Pets™. It makes an excellent target for skeet shooting. If you're mad at someone, throwing this record at them is sure to cause injury. Playing this record at a party may cause mass exodus of Rap fans.

Priced at $199.95, plus an exorbiant S&H charge, this one of a kind collection is a steal at any price. For an additional $29.95 we will include our state-of-the-art ear plugs. Send no money now. Simply provide us with the account number of a major credit card, your Social Security number and your checking account number, and we will bill you when you least expect it.

The previous commercial's claims do not necessarily reflect the views of this Blog or any of its readers. (If it has any readers left.)

No.720
Curmudgeon responsible for this post: Hale McKay at 8:14 PM

I does sound truly awful!

You have sunk deep into the mire of all that is unholy this time Mike, perhaps you should return to "thriller writing" or, then again perhaps that is what drove you to this new low??

At last, someone who understands and appreciates the FINER things in life. ROTFLMAO.

and a rousing ZDEOK cheer for the genius of this.

Thanks for the laughs! Hope you have a great weekend!

You could also have Paul McCartney and Nick Lachey sing "Breakin' Up Is Hard to Do".

Send me two. I have a couple of enemies I need to annoy.

"Islands In The Stream"

Karen - You don't thing Kissinger & Charo can do it better?