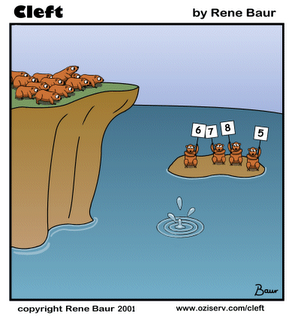 Today, I have handed over the reins of this Blog to a special guest for an exclusive press conference.

Sometimes it doesn't take much, whether it be rumor, an overheard conversation, or in this case a line in a Blog, for a story to take on a life of its own. When an innocent statement threatens to or debunks scientific and proven fact, someone has to step forth to preserve the integrity of knowledge.

Hello. My name is Leonard Lemming. I have been charged by my fellow Lemmings to defend our honor. I assure you that my brethern are behind me one hundred percent. I speak for my people.

Let me begin by stating that Lemmings everywhere hold no ill feelings for the unfortunate Blogger whose statement has fueled this maelstrom of controversy. Miss Monty was simply reacting to a program that had aired recently on that PETA-supported cable channel, The Animal Planet.

While I applaud the The Animal Planet's efforts over the years to educate you humans about life in the animal world, they do on occasion take certain liberties when it comes to the facts. I realize however, that the sometimes misguided and often wrong, activist group, PETA, pumps a lot a money into their causes du jour. 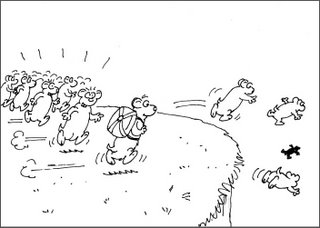 Lemmings are a proud species. Our species has survived for eons on our own merits and have done so without interference from our human neighbors on this planet. Yet, some of you have taken it upon yourselves to question our time-honored rituals.

Before I address our rituals, please permit me to call in question mankind's rituals that we cannot understand. Shall I begin with your propensity to wage war? Not only do humans kill off each other by the hundreds and thousands, but you have even made bombs that can annihilate entire cities.
....What's up with you humans who drink alcohol and then get behind the wheel of your vehicles? Why do you watch "reality" TV programs? Why do you continually put morons and assholes into office? Why do you blog?

Some of you run with the bulls in Pamplona, Spain. Some of you take part in diving competitions from the cliffs in Acapulco. You even have places

you call "Lover's Leaps." I ask you, does this make sense?

You have the audacity to question our rituals? We were proud that Disney made that film years ago about our sport. Of course, they missed the point altogether, calling it a strange and tragic behavior. We are not the dumb animals that the film suggested.
....We invented cliff diving! Unfortunately, we do make mistakes sometimes. After all, we're only mammalian. Some Lemming is supposed to check the tides on the day of our events. You don't honestly think that we choose to dive onto rocks, do you? This is not unlike when one of your kind dives into an empty swimming pool.

We are no more suicidal than that fool who splattered on the concrete in that empty pool. If the Animal Planet producers had been paying attention more closely, they would have seen that our cliff diving competitions are very organized and choreog 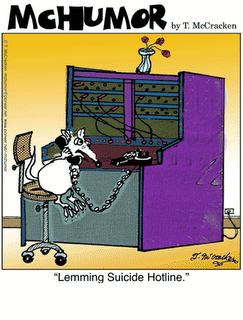 raphed. They failed to take into consideration that in the animal world, the rule of thumb is "the survival of the fittest." As such, our elderly, the sickly, and those who supported George W. Bush among us, always lead the event. They are the first to launch themselves from the cliffs. If they perchance do not survive, their bodies serve as padding to cushion the fall of those who follow.

Suicidal? Nothing could be farther from the truth. There is a method to what you might call our madness. You see, if humans thought that it were not true that we dive from cliffs, then we would be considered nothing but cute little rodents. What do humans do with cute little animals? They take them into captivity and sell them as pets!
....Believe me, we do not want to become pets! That is why I have agreed to address you in this decorum. As long as you humans are kept apprised of those facts, our species will not have to worry about being subjected to slavery.

I wish to thank this Blogger for allowing me to get my message out there to his readers. I also would like to extend my gratitude to each and everyone of you for giving me audience.

Thank you, Leonard Lemming for that inspirational post. I'm sure that it will go a long way in educating my fellow humans about the Lemmings species.

No.721
Curmudgeon responsible for this post: Hale McKay at 11:22 PM

Loved the guest post and
the Lemmings are safe with me...I won't enslave one in my home. *LOL* Keep Jumping to your hearts content, Mr. Leonard Lemming.

OH THANK YOU Mikey for the 'guest' post of the much maligned lemming.
I was scandalized to learn of the false information that has been secretly implanted in our brains regarding these lovely creatures.

I hearby renounce my membership in the Human Race and proudly go to join the ranks of the Lemmings, if they'll have me.

At last, a posting that provides valuable information. I was particularly interested in whom they allowed to lead the group. We humans could learn a lot from the lemmings.

Thanks for enlightening us. lol