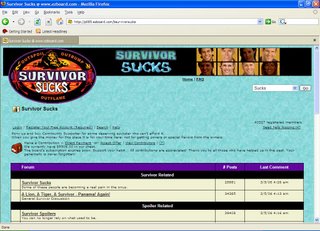 I'm reminded of the classic logic riddle: If an airplane carrying American passengers crashes in Canada, where do you bury the survivors?

When faced with the riddle for the first time, nearly eighty percent are misdirected by the nationality of the passengers and the location of the crash site. The remaining twenty percent point out that survivors are not buried.

Like the observer in Robert Frost's "The Road Not Taken," I'm going to take the road least traveled. There comes a time when survivors should be buried. Call me heartless, but the interment should be performed without ceremony, without eulogy and without a single tear shed for the departed.
....Dig a hole! Bulldoze the earth over the remains! Place no markers over that worthless pit!

Of course, I'm wishing a painful death to the rediculous Survivor and the myriad of cheap clones that have been cluttering the air waves for far too long! It came as no surprise to me to learn that there is "Survivor Sucks" web site.
....Now CBS producers have crawled out from not under a rock, but rather from beneath a NYC sewer manhole cover to give us "Survivor: Cook Islands."
....The "unscripted" premise this time has excited only sick bastards like white supremacists. Twenty "castaways" will be split into four tribes along racial lines - white, black, Asian and Hispanic.
....When a major corporation such as General Motors refuses to air its commercials on a program, that speaks volumes! One would think! CBS, unfazed by the harsh criticism being levied at this program, is not backing down.
....How does it feel viewers? They don't give a shit what you or I think! They know there are enough simple-minded suckers out there who will tune in to another sampling of this Survivor garbage.
....CBS said that a certain amount of editting was necessary to avoid outcries over some racially-charged scenes. "Unscripted?" To me, the magic of deleting and adding scenes allowed them to edit as they recorded and thus create a script in the process.
....Several groups have threatened to boycott the program by refusing to buy or use any product that assiciates itself with Survivor: Cook Islands." If more potential sponsors followed GM's lead, CBS would maybe get the message. We, the viewing audience are sick and tired of this mindless clap-trap they call reality programming.

Wouldn't it be sweet if only one sponsor stayed on board? It would be poetic justice if that sole sponsor was Enzyte! Imagine every commercial break unleashing Smiling Bob with that ear-to-ear grin. Would I be the only one who would be thinking that this man looks like he has overdosed on the stuff?
....Ladies, do you suppose that the producers of the advertisement might pan the camera down when he climbs out of the pool sans his swimming trunks? Ladies, would you really want them too? I say send him home to that happy wife waiting for him at the door. What's with that silly grin frozen on her face? She must have used the Super Glue again instead of her Polident!

I cannot help but wonder what theme Survivor might come up with next season. Jews vs. Germans? Gays vs. straights? Vegans vs. meat eaters? Management vs. staff?Husbands vs. wives? Ooh-ooh! I've got it - wives vs. mistresses!

No.747
Curmudgeon responsible for this post: Hale McKay at 12:39 AM

Haha! The wives vs. mistresses has already been done. I think it was called Paradise Island or something similar. Anyway, I'd boycott Survivor if I ever watched TV at all, but as it is, "not" watching a show would make no difference. I haven't turned a TV on in six months. Except for that hotel stay...

Hi Mike, maybe Viewers vs non-viewers, or Sponsers vs non-sponsers.

I like the idea of your sponser, however I'd also add the Mento's commercials as annoying sponsers too. Oh...and Orbit gum (isn't that the one that says, "dirty mouth?")

After the 1st season of Survivor, I stopped watching. I don't like that other RTV show where they have to eat gross stuff either. I agree, I don't think editing RTV makes it RTV. Now if they were to do something like they did in that movie, The Truman Show, that might be interesting RTV.

My other idea is this: An RTV show where contestants sit in a room for hours/days on end, and have to listen to that stupid whistle tune for Enzyte 24/7. The last one who didn't bash his own brains out wins!

Hale, glad you had an opportunity to rant on this one. I couldn't agree more.

I have never watched Survivor before and don't intend to do so now.

Besides I wouldn't buy a GM vehicle if I were in the market.

As for Smiling Bob, that would be a great idea. I even like the Mentos idea too.

I think shows like that just allow "FOLKS" to escape the REAL WORLD of SURVIVAL. I know that's my story! ~ jb///

I've never watched any reality shows although I've heard "the amazing race"is pretty good.
How can there be "reality" when there is a producer and a director editing the reality for the viewers.
These shows "are in the can" well before they're shown and the participants are sworn to silence until they are eliminated.
Maybe somebody will sue CBS the day after being kicked off the island like happens on Trump's show!

I think it's all pretty funny! LOL

I couldn't have said it better. I've never watched Suvivor, never wanted to watch Survivor and never will watch Survivor. Get a life people!

I watch Survivor. And they divide people by gender and age in that show and in other shows...they made the Average Joe (pseudo-Bachelor) show with the "Average" guys separated from the "Hot" guys...what's the diff? It's only a big deal if people MAKE it a big deal, is what I'm saying.

And in my personal opinion, I'm interested in learning how the different ethnicities will work together to solve the problems that crop up.

But that's just me. :) I think my views may be in the minority, but that's okay too. Women are often considered a minority group as well. LOL (see the irony there? heehee)

I meant to add a disclaimer at the end of this post, but forgot to do so.

Of course there are many people who enjoy these shows. That's okay. My commentary was never meant to dissuade anyone from watching the programs they like, but rather to pontificate in my own subtle way what I personally think of them.