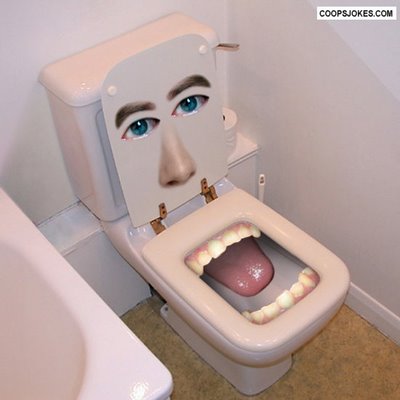 Put The Seat Down!

A young Jewish couple had only recently set up housekeeping when an unfortunate incident occurred. Early one morning, the wife, drowsy from bed, went to the toilet to pee and neglected to notice that the seat was up. When she sat, she kept going!

She was just the right size and shape so that she became jammed into the toilet past her waist with her legs sticking straight up in front of her. She cried for her husband, who rushed in, and for the next hour tried desperately to free her.

In this process, they removed her sleeping gown, but this only left her naked and still stuck, with a particular part of her anatomy prominently visible between her splayed legs. Finally, the couple resolved to call a plumber, despite the embarrassing nature of their problem.

When the plumber arrived, the young man let him in, but as they were walking to the bathroom, the young man realized that his wife was exposed in a very compromising and humiliating way. Thinking fast, he ran ahead of the plumber and placed the first thing he could think of, his yarmulke skull cap, over his wife's exposed privates.

The plumber walked into the bathroom, took one long look, and commented: "Well, I think I can save your wife, buddy, but the Rabbi's a goner."

A blonde, a brunette and a redhead were walking along the beach. A seagull flies over and craps all over the blonde.

The brunette says in a disgusted voice, "Hang on the bathroom is just up the hill, I'll go get some toilet paper."

After she leaves the blonde begins to laugh.

The redhead says, "What's so funny?"

The blonde says, "Well, blondes are supposed to be so dumb and look at her. By the time she gets back with that toilet paper that seagull will be miles away!"

How To Clean Your Toilet - The Fun Way

Instructions on how to clean your toilet. Follow these instructions exactly!


1. Put both lids of the toilet up and add 1/8 cup of pet shampoo to the water in the bowl.

2. Pick up the cat and soothe him while you carry him towards the bathroom.

3. In one smooth movement, put the cat in the toilet and close both lids. You may need to stand on the lid.

4. The cat will self agitate and make ample suds. Never mind the noises that come from the toilet, the cat is actually enjoying this.

5. Flush the toilet three or four times. This provides a "power-wash" and rinse".

7. Stand behind the toilet as far as you can, and quickly lift both lids.

8. The cat will rocket out of the toilet, streak through the bathroom, and run outside where he will dry himself off.

9. Both the commode and the cat will be sparkling clean.

A drunk gets up from the bar and heads for the bathroom. A few minutes later, a loud, blood-curdling scream is heard coming from the bathroom.
A few minutes after that, another loud scream reverberates through the bar.
The bartender goes into the bathroom to investigate what the drunk is screaming about.
"What's all the screaming about in there? You're scaring my customers!"
"I'm just sitting here on the toilet and every time I try to flush, something comes up and squeezes the hell out of my balls."
With that, the bartender opens the door, looks in and says, "You idiot! You're sitting on the mop bucket!!!"

On a flight to Chicago, a gentleman had made several attempts to get into the men's restroom, but it had always been occupied. The flight attendant noticed his predicament.
Sir, she said, "You may use the ladies room if you promise not to touch any of the buttons on the wall."
He did what he needed to, and as he sat there he noticed the buttons he had promised not to touch. Each button was identified by letters: WW, WA, PP, and a red one labeled ATR. Who would know if he touched them? He couldn't resist. He pushed WW. Warm water was sprayed gently upon his bottom. What a nice feeling, he thought. Men's restrooms don't have nice things like this. Anticipating great pleasure, he pushed the WA button. Warm air replaced the warm water, gently drying his underside. When this stopped, He pushed the PP button. A large powder puff caressed his bottom adding a fragile scent of spring flowers to this unbelievable pleasure. The ladies restroom was more than a restroom, it is tender loving pleasure. When the powder puff completed its pleasure, he couldn't wait to push the ATR button which he knew would be supreme ecstasy. Next thing he knew he was in a hospital as soon as he opened his eyes. A nurse was staring down at him with a smirk on her face.
What happened?" he exclaimed. "You pushed too many buttons," replied the nurse. "The last button marked ATR was an Automatic Tampon Remover. Your penis is under your pillow."

How many men does it take to change a roll of toilet paper? - We don't know, it's never happened.

No.746
Curmudgeon responsible for this post: Hale McKay at 12:15 AM

Hale, the cat one got me. Since we have a cat, and we have caught her at the toilet apparently trying to get a drink, I could just imagine the chaos should we try this approach.

The others were quite hilarious too.

Cute stuff. I'm gonna try the toilet cleaning with the cat the next time mine pisses me off...which will be in about 5 seconds, probably.

Hi Mike, there is some good stuff there.
If you haven't already tried it your html element should work now, Beta claimed a fix and when I tried Warren's it worked OK, Good luck.

As a big fan of toilet humour, I have to say you've done a nice job here!

I'd heard the one about the cat and ATR before, but not the Jewish couple. Too funny!!!

Where do you find the time to put this stuff together? I've been laughing for 5 minutes.