Want to know how to confuse an old Blogger? It doesn't take much. Just picture him trying to listen to Monty Does Mojo on KMRL radio, trying to follow the live chat with other listeners, paying attention to the Sunday Night Football game in the other room, and attempting to post a blog!

I would like to extend kudos to Monty for putting together a nice mix of music. There's something for just about everyone. If you haven't tuned yet, drop in sometime. The details and links can be found on her web site.

There was a brief conversation in the chat room about the recent ban on pre-packaged spinach.

Popeye the sailor man is mad as hell! How dare anyone take spinach off the shelves! He's on the prowl, looking for Bluto, or Brutus or what ever name he's using these days. He's certain that his old nemesis is behind some dastardly scheme to rid the world of spinach.
....If an Ecoli scare wasn't bad enough, Bluto even tampered with the packages of spinach and put live frogs in them. Check out this picture! If you look closely just beneath the lettering, you'll see one of the hapless amphibians nestl 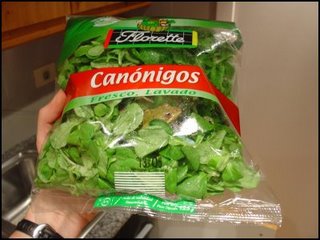 ed among the spinach leaves.
....The picture was "borrowed" from that sweetheart Jules who posted it just recently on her site.

This just in: Study Raises The Bar: Drinkers Make More $

Did you know that joining your colleagues after work for a few drinks could help you financially?
....A new study says there's a correlation between alcohol and income - and those who imbibe tend to make more money than teetotalers. (Now they tell me this?)

....The report titled: "No Booze? You May lose. Why drinkers earn more money than nondrinkers," was co-authored by Edward Stringham, an associate economics professor at San Jose State University. (Who am I to question a college professor?) 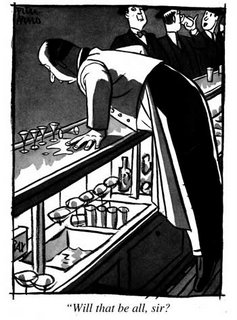 ter work, and I was supposed to get a raise?)

Woe to the victims of the genocide - those brain cells that were sacrificed for the advancements that were never forthcoming! I know that I'll never be able to recoup the moneys from the raises I was never given, but maybe I should eulogize the dearly departed.

Show until then, (hic) let me toasht Monty again for a good show (hic) with all the good mushic tonight. Well done, Shweetheart! I am shacrificing a few more brain schells in your honor! Don't worry, I'll shave a few for next Shunday!

No.749
Curmudgeon responsible for this post: Hale McKay at 10:23 PM

Does the increase in income take into consideration the cost of rehab and divorce?

I'll drink to that.

The ones earning more are the only ones who can afford to drink Mike.

Correlation, but not causation. The areas where incomes are higher have more enlightened views on social drinking. Where I live, there are liquor stores and incomes are low. one doesn't cause the other, but both have to do with this being the Bible Belt.

I meant to say there are NO liquor stores! Since people here have grown up with the idea that alcohol is evil, they either abstain or overdo it.. not many real "social drinkers".

I knew it!! Those damn alchoholics get all the fun. Sheez!