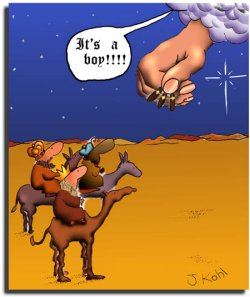 Dateline: 2006, New York City - (MAGI press story) - Today in Downtown Manhattan, three Eastern Kings hailed a cab on Broadway. Bearing gifts, they reportedly said to the hack, also a Middle Easterner, "Follow that star!"
....The Must Always Gag Information news service reported that it was the middle of the day and no stars were visible in the bright sunlit sky.
....It was later learned they were chasing Paris Hilton. (They loved her video.) They had a lot of money and wished to sign up to be in her next feature film, "It Came Upon The Midnight Clear." 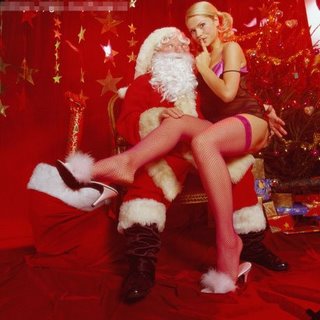 Ever wonder what Santa does the other 364 days of the year? That's when he gets his presents. He receives them from those who have been naughty and nice!

Believe you me, he's checking that list more than once and he's definitely checking it more than twice!

Five will get you ten that Santa's favorite song is Santa Claus Is Coming To Town ! Where do you think all those elves came from?

Because you asked for it, Lime , here is your song. I just happened to have the perfect cartoon to accompany this joyous holiday ditty. 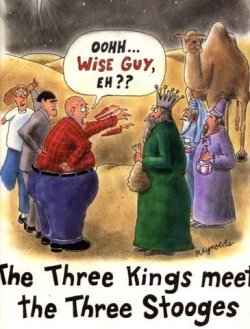 We three stooges of Dubya are
Getting rich with soldiers afar;
Condi and Cheney, Rumsey so zany
Following Super Tsar.

Born a babe, silver spoon in his mouth
And now the Republicans have gone south
Tsar rambling, Tsar gambling
His big foot in his mouth.

You crack me up. Now if only I could crack the blogger word verification things would be peachy.

next up....
lo, how a bush er fumbling
(sung to the tune of lo how a rose er blooming)

OMG, I am ROTF at We Three Stooges of Dubya Be!

Thanks for the laughs!

"We Three Stooges of Dubya Are"

Where do you come up with all this stuff?

Thanks for the smiles.