Georgie Got Run Over 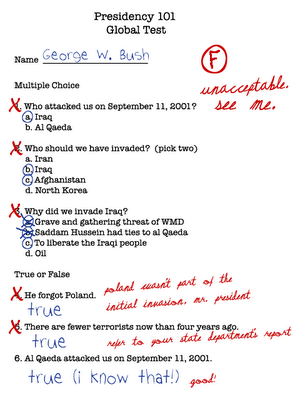 We all know how we would grade Dubya's tenure. I wonder how he would rate himself? Ha! No one would allow him to do so, because it would require honest and objective answers.

It appears the old boy has problems with multiple choice questions.
....The test designers must have known that the True or False questions would give him fits!
....All things considered, that's probably not too bad of a score for a rich oil man from Texas.

He'd been thinkin' too much about Iraq,
And we'd begged him to bring our troops home,
But he said he'd find the WMD first,
So he mumbled in the Oval Office all alone.

When they found him after the elections
On the White House lawn in the grass,
There were slap prints on his sad face,
And the First Lady's boot marks on his ass.

(Refrain:)
Now we're all so worried about Georgie,
He's seen the Democrats take away his veto.
See him in there watchin' war movies,
Drinkin' Ovaltine and playin' with his G.I. Joe.

There were no Weapons of Mass Destruction,
That's why we're bombin' every camel in Iraq.
He has no support in Congress or the House,
Should we open the absentee ballots or send them back?

(Refrain:)
Now that his goose has been cooked,
He's eatin' rice from some Korean paddy.
The map of the red and blue states
Seem to match the eyes and hair of his Daddy.

I'm askin' all my friends and neighbors
To tell him to call back our girls and boys.
They never should have given a Presidency
To a man who plays war games with G.I. Joe toys.

No.816
Curmudgeon responsible for this post: Hale McKay at 9:15 PM

Your song parodies are terrific. I can't wait to see what you come up with tomorrow. :)

You are so twisted. I like that in a man.