The Turkey Popped Out of the Oven* 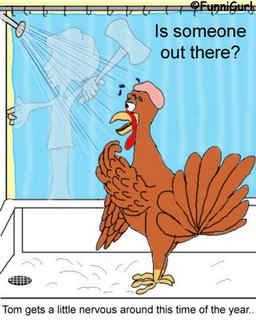 The Turkey popped out of the oven
and rocketed in to the air;

It knocked every plate off the table
and partly demolished a chair.

It ricocheted into a corner
and burst with a deafening boom,

Then splattered all over the kitchen,
completely obscuring the room.

It stuck to the walls and the windows,
it totally coated the floor,

There was turkey attached to the ceiling,

where there had never been turkey before..

It blanketed every appliance,
it smeared every saucer and bowl;

There wasn't a way I could stop it;

that turkey was out of control.

I scraped and I scraped with displeasure

and thought with chagrin as I mopped,

That I would never again stuff a turkey

with popcorn that hadn't been popped.

No Halloween or Thanksgiving in Arkansas*

The state of Arkansas recenetly annouced that Halloween and

Thanksgiving will no longer be state holidays.

Last year I had my chance to do the traditional thing of
shooting my own turkey for Thanksgiving . . .

I guess that's enough turkey for one day from this turkey.

No.804
Curmudgeon responsible for this post: Hale McKay at 8:26 PM

Oh, Lord, this turkey stuff is so hilarious. I'm thinking of fixing hamburgers for Thanksgiving. LOL.

How did you do those riddles? I love it!

I enjoyed the turkey jokes a lot!

Just another reason that I'm glad to be a vegetarian. No shooting turkeys for me. It's easier to shoot tofu - it can't run or fly! hahahahahahahahah

hee.hee. It's tradition in my family that my Aunt burns the turkey. We've even had the fire department there one year.

Hi Mike, I thought you must have been sick with no posts!!! now I find it's my bloglines that's sick, I'll catch up now.