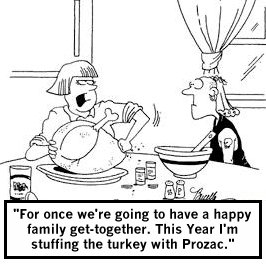 You've ever had Thanksgiving dinner on a Ping-Pong table.

Thanksgiving dinner is squirrel and dumplings.

You've ever re-used a paper plate.

If you have a complete set of salad bowls and they all say Cool Whip on the side.

If you've ever used your ironing board as a buffet table.

On Thanksgiving Day you have to decide which pet to eat.

Your turkey platter is an old hub cap.

Your best dishes have Dixie printed on them.

Your stuffings secret ingredient comes from the bait shop.

Your only condiment on the dining room table is ketchup.

Side dishes include beef jerky and Moon Pies.

You have to go outside to get something out of the 'fridge.

The directions to your house include "turn off the paved road".

You consider pork and beans to be a gourmet food.

You have an Elvis Jell-o mold.

Your secret family recipe is illegal.

You serve Vienna Sausage as an appetizer.

And now, some Thanksgiving jokes:

Young Billy Bob was sitting in his grandmother's kitchen,
watching her prepare the Thanksgiving meal.
...."What are you doing?" Bruno asked.
"Oh, I'm just stuffing the turkey," his grandmother replied.
...."That's cool!" Billy Bob said. "Are you going to hang it next to the deer?" 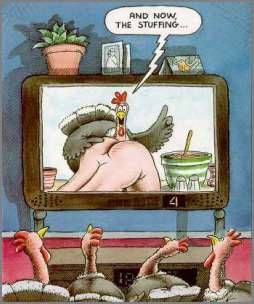 A lady was picking through the frozen turkeys at the grocery store, but couldn't find one big enough for her family.
....She asked the stock boy, "Do these turkeys get any bigger?"
The stock boy answered, "No ma'am, they're dead."

A man in Phoenix calls his son in New York the day before Thanksgiving and says,"I hate to ruin your day, but I have to tell you that your mother and I are divorcing; forty-five years of misery is enough."
...."Pop, what are you talking about?" the son screams.
"We can't stand the sight of each other any longer," the father says. "We're sick of each other, and I'm sick of talking about this, so you call your sister in Chicago and tell her."
....Frantic, the son calls his sister, who explodes on the phone. "Like hell they're getting divorced," she shouts, "I'll take care of this!"
....She calls Phoenix immediately, and screams at her father, "You are NOT getting divorced. Don't do a single thing until I get there. I'm calling my brother back, and we'll both be there tomorrow. Until then, don't do a thing, DO YOU HEAR ME?" and hangs up.
....The old man hangs up his phone and turns to his wife. "Okay," he says, "they're coming for Thanksgiving and paying their own way."

No.803
Curmudgeon responsible for this post: Hale McKay at 9:01 PM

"They're coming for Thanksgiving and they're paying their own way."

That brought tears to my eyes and my ribs hurt.