The following cartoon didn't fit with any of my previous posts, and it certainly doesn't fit here either. While it is a bit of a groaner, I liked it. It's colorful, and, well ... it's a ... groaner! 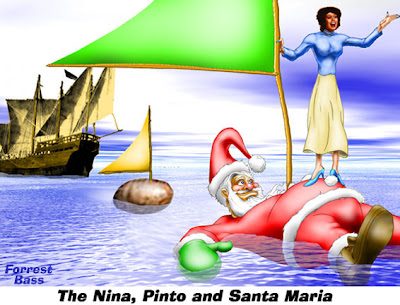 Rudolph Got Run Over By My Grandma*

(CHORUS:)
Rudolph got run over by my grandma
While cruisin' all those back roads;
Even though huntin' season was over,
She bagged that deer with the shiny nose.

She'd been listening to the radio
And she nearly lost her breath
Yellin' cuss words at the DJ
For playin' that song where she gets hooved to death.

So she set out on the warpath
There was evil in her eye
She said "I'm gonna find that reindeer
And by golly, one of us is gonna die!"

Santa Claus had made a landing
On the new expressway
Grandma was doin' 120
With her headlights pointed straight at Santa's sleigh.

Guess we'll all be missing Rudolph
In the winter when it snows
But now he's up in reindeer heaven
With a Buick logo stamped into his nose.

But there's no regret from Grandma
As she drove away, she sneered,
And then she hollered out the window
"Merry Christmas to all, and to all, a FLAT DEER!"

(CHORUS:)
(*Another piece of work from the archives of Anonymous.)

No.843
Curmudgeon responsible for this post: Hale McKay at 12:04 AM

It took me entirely too long to figure out the cartoon. I'm going back to bed!

Wishing you Happy Holidays and peace on earth to all!

You are so funny. I love your parodies. What WILL you do after Christmas?
Hope you're resting up.
J.

Who says that cartoon isn't apropos? Not me.

Man is it funny. LMAO

I do look forward to your postings. I keep wondering how, or if, you can top the last one. Every time you come up with something even funnier or better in some way.

What better way to....
serve others, care about those you serve and share the love in your heart.

May your new year be prosperou.

I think it's time for some New Year stuff.

No! No! No! Rudolph is fine!
Gramma was drinkin wine
or was it moonshine? but she never hit Rudolph

Groooooan. It was funny, though -- as always.:)

I don't know about this WordVer word -- snuogza. What do you think -- pet name or curse? LOL.

Uh - why didn't the cartoon use an image of a Pinto car? I spent a minute looking at the cartoon going, "Why is there a potato in the ocean?"