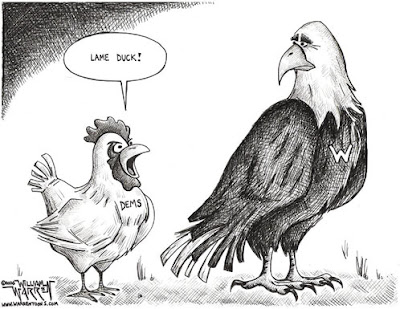 Why not? Everyone else is running!

Who says a Blogger can't run the country? Could I do any worse than the present one? Think of the staff I could put together from my Blogroll alone.
....Why not? I'll throw my baseball cap in the ring! Besides, I know how to pronounce nuclear.

To be sure, becoming President would be a lateral move, but the job pays better than my current position. I could actually use the money. 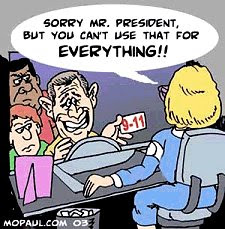 I would not use the September 11 attack on our country as a free pass to do what I please while ignoring New Orleans and other disaster areas in our own backyard.
....I have no pocket-enhancing interests in the oil in the Middle East. I do not have daughters who like to run naked in the hallways of hotels. I would never lay siege to a country and put our soldiers in harm's way just to save face for my daddy, especially when every one who is smarter than me tells I cannot win.
....I would run a grass roots campaign. I would really enjoying kissing all the babes, like Monty, Jules, Miss Cellania, Cheri, Serena Joy, and ... er ... What's that? Excuse me, my wife, who is my acting campaign manager just informed me that I'm suppose to kiss babies, not babes! ( Why is there always someone wanting to take the fun out of everything ? ) Psst ... All of you gals on my blogroll, even those not mentioned - the offer stands! ( The Bush family may have raised a fool, but not mine ! )

Eventually, some news-type is going to ask me on what platform am I going to run my campaign. For starters, I would institute an immediate change in the communications fields, especially those powerful phone companies. If I were elected President of the United States, the following message is what you hear ever time you use the phone:

"GOOD MORNING, WELCOME TO THE UNITED STATES OF AMERICA ."
"Press '1' if you speak English."
"Press '2' to disconnect until you can"

Overnight, a multitude of problems would be solved, because this plan would have a trickle down effect. My motto for this bold plan would be: "English, no speaky? New home you seeky!"

Won't you jump on the band wagon and vote: Pointmeister For President ?

Curmudgeon responsible for this post: Hale McKay at 4:33 PM

*sniffles I didn't get my name in highlight. :(
(Oops I forgot I am not a babe anymore)
Pointmeister For President!
Rah rah rah
No hablo español
Hail McKay!

As for the other languages. No.

I do have a considerable vocabulary in Profane. Does that count?

Count me in. My wife won't let me either, but if you need help kissing the babes, I could be your man. snerx.

Go for It, and as raggedy says, "Hail McKay!"

I'm all puckered up and waiting. I'd vote for you, Mikey, even if you did put Monty BEFORE me! Want me to be your public relations person? I need some relations...public or otherwise.
;)

Hi Mike, Ya need an ambassador to the Pacific region? I'm your guy and we Aussies talk a SIMILAR brand of english to you.
Hail McKay, Mikey for Pres.

Count me in! I'm pretty good at PR.

Your campaign manager's spoiling all the fun, but that's okay, I'll vote for you anyway.:) Hell, I'd vote for anybody who can pronounce nuclear. Pointmeister for President! Have you given any thought to cabinet appointments? I wouldn't mind unseating Condi Rice.

I'd lay a big wet one on ya. Would make for the perfect photo op!

You've got my vote.
For kisses, I'll stuff the ballot box.

That wasn't intended as a euphemism for...something else, but it COULD be. ;)