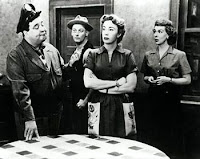 You could hardly see for all the snow, Spread the rabbit ears as far as they go. Pull a chair up to the TV set, "Good Night, David. Good Night, Chet." Depending on the channel you tuned, You got Rob and Laura - or Ward and June.It felt so good. It felt so right.
Life looked better in black and white. I Love Lucy, The Real McCoys, Dennis the Menace, the Cleaver boys , Rawhide, Gunsmoke, Wagon Train, Superman, Jimmy and Lois Lane. Father Knows Best, Patty Duke, Rin Tin Tin and Lassie too, Donna Reed on Thursday night! 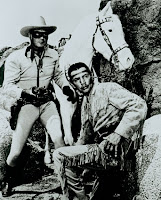 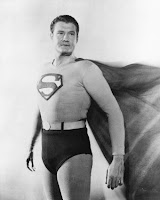 -- Life looked better in black and white. I want to go back to black and white. Everything always turned out right. Simple people, simple lives. Good guys always won the fights. Now nothing is the way it seems, In living color on the TV screen. Too many murders, too many fights, I want to go back to black and white. In God they trusted, alone in bed, they slept, A promise made was a promise kept. They never cussed or broke their vows. They'd never make the network now. But if I could, I'd rather be In a TV town in '53. It felt so good. It felt so right. 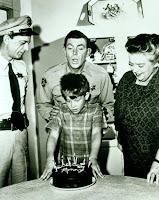 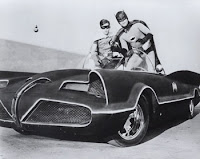 Another Goody For The Oldtimers
My Mom used to cut chicken, chop eggs and spread mayo on the same cutt ing board with the same knife and no bleach, but we didn't seem toget food poisoning.My Mom used to defrost hamburger on the counter AND I used to eat it raw sometimes, too. Our school sandwiches were wrapped in wax paper in a brown paper bag, not in ice pack coolers, but I can't remember getting ecoli.
Almost all of us would have rather gone swimming in the lake instead of a pristine pool (talk about boring), no beach closures then.The term cell phone would have conjured up a phone in a jail cell, and a pager was the school PA system. We all took gym, not PE... and risked permanent injury with a pair of high top Ked's (only worn in gym) instead of having cross-training athletic shoes with air cushion soles and built in light reflectors. I can't recall any injuries but they must have happened because they tell us how much safer we are now..Flunking gym was not an option...even for stupid kids! I guess PE must be much harder than gym.Speaking of school , we all sang the national anthem, and staying in detention after school caught all sorts of negative attention. We must have had horribly damaged psyches. What an archaic health system we had then.

Remember school nurses? Ours wore a hat and everything. I thought that I was supposed to accomplish something before I was allowed to be proud of myself.I just can't recall how bored we were without compu ters, Play Sta tion, Nintendo, X-box or 270 digital TV cable stations.
Oh yeah... and where was the Benadryl and sterilization kit when I got that bee sting? I could have been killed!We played 'king of the hill' on piles of gravel left on vacant construction sites, and when we got hurt, Mom pulled out the 48-cent bottle of Mercurochrome (kids liked it better because it didn't sting like iodine did) and then we got our butt spanked.
Now it's a trip to the emergency room, followed by a 10-day dose of a $49 bottle of antibiotics, and then Mom calls the attorney to sue the contractor for leaving a horribly vicious pile of gravel where it was such a threat. We didn't act up at the neighbor's house either because if we did, we got our butt spanked there and then we got butt spanked again when we got home.
I recall Donny Reynolds from next door coming over and doing his tricks on the front stoop, just before he fell off. Little did his Mom know that she could have owned our house. Instead, she picked him up and swatted him for being such a goof. It was a neighborhood run amuck.
To top it off, not a single person I knew had ever been told that they were from a dysfunctional family. How could we possibly have known that? We needed to get into group therapy and anger management classes? We were obviously so duped by so many societal ills, that we didn't even notice that the entire country wasn't taking Prozac! How did we ever survive?
LOVE TO ALL OF US WHO SHARED THIS ERA, AND TO ALL WHO DIDN'T- SORRY FOR WHAT YOU MISSED. I WOULDN'T TRADE IT FOR ANYTHING
(A special tip of the hat to Earl who sent me this nostalgic trip down Memory Lane to those simple Black & White days.)

No.909
Curmudgeon responsible for this post: Hale McKay at 10:14 PM

It wasn't until Nick at Nite came about that I found out SOME of those shows were broadcast in color! My family watched black and white TV long after everyone else had upgraded.

I still think Andy Griffith was the best show ever.

hey, i'm under 40 but i remember mercurachrome! and the cutting board things, and the raw meat on the countertop....we also had a b&w tv until i was about 6. i remember having to twiddle with the knobs to get any kind of picture and if youwanted to watch something at 3 you'd better turn it on at 2:30 to give it chance to warm up.

I might have remembered all of them, but I am having a senior moment.

Those days were much simpler, that's for sure.

You haven't written a post like this in quite a while Mike. It reminds me of why Me is so enthralled with your blog and came here in the first place.(That is not meant as an insult.)

Me not so certain Me wants to go back to black and white. There be so many programs that lived on the fringe and had the same qualities. Bewitched. I dream of jeannie. Gunsmoke, Star Trek, etc. But me does understand what you are saying. It was a better, more peacefull time and and a rumble left you with a black eye, not a bullet wound.
Me dad used to tell me he walked to school in the rain and the snow and it were up hill, both ways.
What do we tell youngins. "When Me was a kid Me didn't get cable TV 'till me were 15 years old."
Me remembers me first remote control. It were a notch cut into the end of an old broomstick handle used to turn the knob on a B&W set, a Zenith! Remember those? Remember dials?? Man you brought back a flood of memories. And to be honest a few tears as well.
STOMP.

Thanks for the trip down Nostalgia Lane. As much as I love modern technology (and color TV), that era, the one I grew up in, was easier, gentler, and altogether kinder. Common sense was the order of the day, and I think it was better that way. We never knew we were disadvantaged, unsanitary, disease prone, abused, neglected, subjected to barbaric do-it-yourself medical procedures, wearing clothes that would kill us, or stunk -- because nobody TOLD us so. We were much better off.

Gosh, I remember all of them! LOL

Terrific post - thank you for sharing! I have a day home so I am trying to say hello to my Internet friends! Hope all is well with you and you have a wonderful day!

I remember TV's with knobs instead of remotes - we only got 3 channels anyway. And the rabbit ears. And how if the wind was blowing the antenna on the roof you might lose the picture. But for some reason it wasn't that big of a deal. Amazing how much our lives revolve around tv, video games and other electronic entertainment.

Gidday Mike,
I must be showing my age as I can well and truely remember the B&W TV days and good days they were, as were a lot of movies that were made then and before TV. Would "Casablanca" be as good in colour. I do not think so.
My mom also cut the chicken on the board and did all that you mentioned and we did not get sick. Now you seem to almost have to sterilize everything.
I remember when TV came to our neck of the woods, back in the late 50's the big treat for us kids was when Mom & Dad would take us on a bus to the store that had TV playing in the store window where we would join a bunch of other people to watch "Wagon Train" or "Leave It To Beaver".

I remember going on vacation with my parents and they did not even lock the door to the house! My parents never locked their car doors.

Great post and thank you for the walk down memory lane!

That was wonderful.
Thanks for the memories.
I did a similar one quite some time ago and my brother loved it.