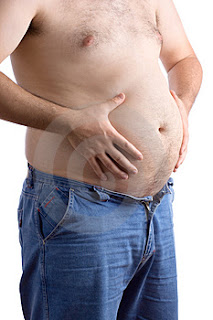 A guy calls a company and orders their 5-day, 10-pound weight loss program. The next day, there's a knock on the door and there stands before him a voluptuous, athletic, 19-year-old babe dressed in nothing but a pair of Nike running shoes and a sign round her neck. She introduces herself as a representative of the weight loss company.

The sign reads: "If you can catch me, you can have me." Without a second thought, he takes off after her. A few miles later, huffing and puffing, he finally catches her and has his way with her. The same girl shows up for the next four days and the same thing happens. On the fifth day, he weighs himself and is delighted to find he has lost 10 pounds, as promised.

He then calls the company and orders their 5-day/20- pound program. The next day there's a knock at the door and there stands the most stunning, beautiful, sexy woman he has ever seen in his life. She is wearing nothing but Reebok running shoes and a sign around her neck that reads: "If you catch me you can have me." Well, he's out the door after her like a shot! This girl is in excellent shape and it takes him a while to catch her. When he does, it's definitely worth every muscle cramp and wheeze. So for the next four days, the same routine happens. Much to his delight, on the fifth day he weighs himself only to Discover that he has lost another 20 pounds, as promised.

He decides to go for broke and calls the company to order the 7-day/50-pound program. "Are ! You sure?" asks the representative on the phone, "This is our most rigorous program." "Absolutely!" he replies," I haven't felt this good in years."

The next day there's a knock at the door; and when he opens it he finds this huge, muscular, 7-foot tall man standing there, wearing nothing but pink running shoes and a sign around his neck that reads: "I'm Dave. If I catch you, you're mine..."

"I once read this quote by the Rev. Joel Olsteen: ('You can't do anything about what is gone, but you can do something about what is left.') So I took one look at the last piece of cake and promptly ate it too." -The Pointmeister

Stupid Is As Stupid Does

Warning on a bottle of hair coloring:
DO NOT USE AS A TOPPING FOR ICE CREAM

Bloomsbury Books editor to Harry Potter author J.K.Rowling, after purchasing Harry Potter and the Philospher's Stone (for $1910)in 1966:
YOU'LL NEVER MAKE ANY MONEY OUT OF CHILDREN'S BOOKS, JO. KEEP YOUR REAL JOB.

President George W. Bush on health care in America.
TOO MANY GOOD DOCS ARE GETTING OUT OF THE BUSINESS. TOO MANY OB-GYNS AREN'T ABLE TO PRACTICE THEIR LOVE WITH WOMEN ALL ACROSS THIS COUNTRY.

No.910
Curmudgeon responsible for this post: Hale McKay at 10:14 PM

Thanks for the laughs. I can always use them.

I knew the weight loss program was going to be killer. tee hee, snerx.

Hi Mike, Ya gotta slow down your output buddy, its taken me 20 minutes just to catch up... not gonna comment on all posts... but did enjoy them.

I bought a jar of peanut butter the other day. the label said: "ingredients: peanuts, salt"

then right below this: "WARNING-contains peanut products"

glad they added that last bit, or I might have been unaware...

I love the weight loss program -- and all the extra funnies. I think the guy with the belly is stalking me -- I see him everywhere I go.:)

But he hasn't been able to catch you yet, Serena?

I can't stop laughing!
Weight and See...Hahahahaha
Thank you so much!
I needed that today.
Huggles