Consummate - to have sex after a bowl of soup

Should we condemn those who look for love in those Chat Rooms? There is "no" danger of anyone misrepresenting themselves behind the shelter of a keyboard, is there? Of course not! Everyone is honest because they want to meet Miss or Mister Perfect.

....This is evident, as you can see by the picture below of a typical male My Space user. 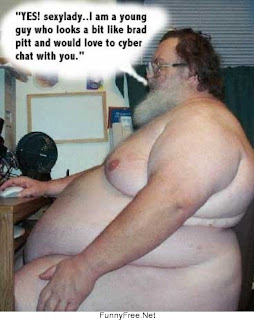 ....Isn't it amazing how many men there are out there that look like Brad Pitt? There is a certain asylum on line, where even the Michelin Man can hook up with a Jessica Simpson look-alike.
....Just because I look like George Clooney with less gray hair doesn't mean I should flaunt it on line, does it? I'm not about to brag that just 15 minutes ago I was chatting with Catherine Zeta Jones.

....The way I figure it, the beautiful girls and handsome men go to chat rooms to stay away from the hordes that hit on them at the bar scene. I can sense that you are convinced.

So what does soup have to do with sex? Before you have either one, you'll want to know where it's been.
....Just ask Charlie Brown! (If you under the age of 18, please stop here and do not scroll down.) 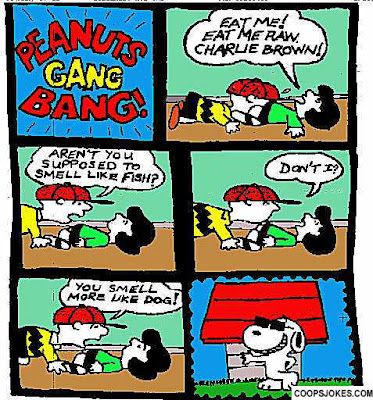 We all know that size does not matter!

Everyone these days knows that is wise to protect themselves. Protection comes in many comfortable and practicle shapes and sizes! 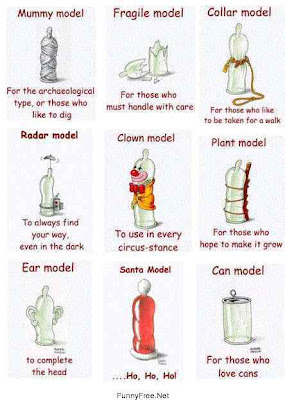 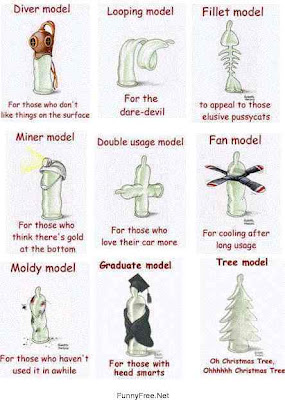 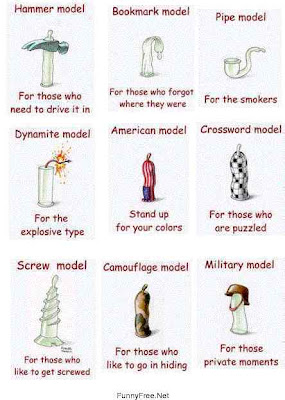 No.903
Curmudgeon responsible for this post: Hale McKay at 10:50 PM

This post is great and the pictures are pricless! Thanks for the giggles.

My eyes are barely unstuck yet (it's early), but that woke me up with some loud laughs. I wanted to say the pix are priceless but Rain already said it, so -- ditto.

You are a nasty, naughty boy. I like that in a man.

Once again you have provided a service to all America.

While the gentleman in the photo claims to have a resemblance to Brad Pitt, it ain't close. Maybe it's his maleness.

The names for the marvelous varieties of protection are as pricless as the items themselves. One should always practice safe sex. Now we can do it with a sense of humor/humour. tee hee.

The collar model can be particularly useful for those of us who have matured to the state where we might need some assistance to keep the blood in the right amount at the right place. After all, what are penis rings for anyway? snerx. giggle.

Regardless of what anyone says, I do not look like Brad or George. However, I did have someone say I reminded her of The Donald. I was very close to being insulted. I prefer the Gary Collins or Danny Kaye reference. But, The Donald? Yuck.

That man is disgusting! And he looks like someone that lives around here. Hmmm.... maybe I better go check the sex offenders list...

Thanks for the giggles.

This is why I stay out of chat rooms. That picture is hilarious!