Anyone Get the Number of That Tree?

Coming home, I drove into the wrong house and collided with a tree I don't have.

The other car collided with mine without giving warning of its intentions.

I thought my window was down, but I found out it was up when I put my head through it.

I collided with a stationary truck coming the other way.

A truck backed through my windsheld into my wife's face.

The guy was all over the road. I had to swerve a number of times before I hit him.

I pulled away from the side of the road, glanced at my mother-in-law and headed over the embankment.

In my attempt to kill a fly, I drove into a telephone pole. 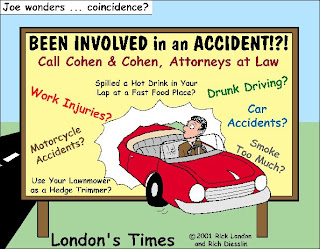 I had been shopping for plants all day and was on my way home. As I reached an intersection, a hedge sprang, obscuring my vision and I did not see the other car.

I was on my way to the doctor with rear end trouble when my universal joint gave way causing me to have an accident.

I had been driving for 40 years when I fell asleep at the wheel and had an accident.

My car was legally parked as it backed into the other vwehicle.

The pedestrian had no idea which direction to run, so I ran over him. 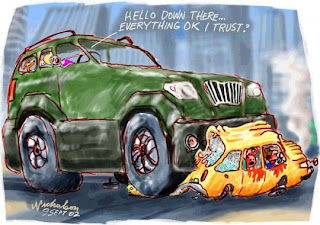 A pedestrian hit me and went under my car.

As I approached the intersection a sign suddenly appeared in a place where no sign had ever appeared before. I was unable to stop in time to avoid the accident.

I was sure the old fellow would never make it to the other side of the road when I struck him.

I saw a slow moving, sad faced old gentleman as he bounded off the roo 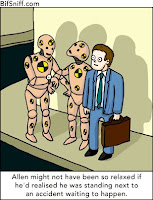 I told police that I was not injured but on removing my hat found that I had a fractured skull.

The indirect cause of the accident was a little guy in a small car with a big mouth.

I was thrown from my car as it left the road. I was later found in a ditch by some stray cows.

The telephone pole was approaching. I was attempting to swerve out of its way, when it struck the front end.

(The SUV cartoon is courtesy of Nicholson Cartoons.)

No.902
Curmudgeon responsible for this post: Hale McKay at 10:25 PM

Those are hysterical. The stuff people say is mind-boggling sometimes. If I ever have a wreck, I hope I'm rescued by kind-hearted stray cows.

It's amazing but none of the form filler inners was to blame for their accidents, hows that for luck?

Me has read Lederer's books for quite some time now. Anguished English is among me favorites. Thanks for the reminder!

Makes me want to be more careful about my comments and postings. Or not.