Litany of a Lethargic Lexicon

What's in a title anyway? Does it follow that it should reflect the content of the ensuing text? Is there an assurance that a catchy, killer title will prominently place one's post near the top of Google search results?
....My use of alliteration in the title of this post is decidedly by design. As a point of illustration, Noah Webster was brought in as a material witness for the prosecution. His credentials, impeccable as a lexicographer, could not be called into question.
....According to a volume of his works, Webster's New World Dictionary of the American Language, the definitions of the entitled words follow.

litany - a recital or an account, usually repetitive
lethargic - drowsy or dull, sluggish
lexicon - the vocabulary of an author, or of a field of study

To wit, this post will be an account of recent events and will probably be repetitive. (i.e., Been there, done that.) I am in fact lethargic from the laborious task of trying to clear my driveway of ice from the recent snow/rain/sleet storm of Tuesday and Wednesday last.
....Finally, that leaves the ambiguous presence of the word lexicon. The word and its ambiguity refers to a dream, a possible project that is only in the infancy of discussions now. Its fruition, if it indeed comes to pass, will be announced hopefully in the near future, not only by myself but by any other parties who may participate.
....Without further ado, on with the litany. 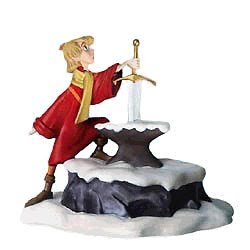 The Sword in the Stone

As I approached the legendary icon I could not help but be humbled. Was it possible that a mere commoner could be King? Was I the one who was destined to loose Excalibur from the stele where Merlin had embedded it so long ago?
....At first I grasped the hilt and gently pulled on the sword, but the stone did not yield its hold upon the hidden blade. I planted my feet and positioned myself for the maximum leverage.
....Alas, twas not the steel of the fine sword that moved in agonizing protest to my show of strength, but instead it was the muscles and sinews of my back that gave way. Lest I caused irreparable harm to myself, I backed away from that monument of futility.
....Momentarily depleted of strength, I sat myself down upon an outcropping and gazed upon the enigmatic object. As I studied it, I resigned myself to the fact that it would not be I who would one day rule from Camelot.
....As reality and the folly of my reverie dissipated, I arose from the stairs of my back porch and fetched another shovel. As I walked past the snow shovel that been thrust into the snowbank the previous day, the man who would be King set about the arduous un-regal task of snow and ice removal of yon driveway.

I have to admit that I am a long time fan of Star Trek and its spin offs. Not to denigrate the original series, I am most fond of Star Trek: The Next Generation. Its appeal lies in not only the improved special effects, but also in the superior scripts and character development.
....Having said that, this writing is neither a critique nor a discussion of the Star Trek franchises. It is not an excuse to use the image of the Enterprise warping into another quadrant of space many parsecs away, although it is a cool image.
....The subject of Star Trek: The Next Generation serves only to mention the addition of a recent blog to my blogroll. I am not generally prone to reading celebrity blogs, but this is one that peaked my interest.
...."Generation" fans will recognize Wil Wheaton as the erstwhile member of the Enterprise's bridge crew, Wesley Crusher* and the son of ship's doctor, Beverly Crusher. (I must say that I had a fanciful love/lust attraction to Gates McFadden who played Leslie's mother. While others favored Deana Troi, Marina Sirtis, I pledged my affection to the beautiful red headed doctor.) Ahem, that's enough about flights of fancy.
....I was curious as to what Wheaton would find to write about. I suspected that there would be a lot of talk about his acting career. (He also appeared in the film Stand By Me.) Not so.
....I was surprised, but should not have been to find that he is a techno-computer geek. He is now married and has two children. Had I not known who he was, the blog would not be unlike literally thousands of others, with the exception that his is well written.
....If you find yourself curious about what a former child actor/TV star would blog about, you can read his blog here. If you are interested in anything he may have written about Star Trek: The Next Generation, I did find one post that I found interesting. It was titled The Picard Maneuver. Engage!

What a Difference A Degree Makes

The mercury in the thermometers surged to 33 degrees today. That one seemingly insignificant degree placed the temperature above the freezing point. Ever so slightly, the ice in my driveway began to melt. As such I was able to remove a lot of ice today. The ice at the end of the driveway however, remained stubbornly glacial. We sure could use a few more degrees of separation of the mercury and the freezing point of water.
....The two and a half hours of exposure to the elements and the strain on my body explains my aforementioned lethargic state.

That's what's in a title. What say you, does the title reflect the context of the text that followed? Is it a catchy, killer title or what?

No.899
Curmudgeon responsible for this post: Hale McKay at 7:32 PM

The lethargic lexicographer did okay because, yes, the title IS killer. Catchy, too.

I'm glad your ice is melting, but God help us when we get excited about 33 degrees and consider it a heat wave.:)

Gidday Mike,
Gotta admit I am a Star Trek fan also. As much as I enjoyed the original series with James T. Kirk (which I saw as it 1st aired on TV here in the late 60's), I liked STTNG better. Patrick Stewart made the show with his classical vocal tones and ole' Wil Wheaton never had much of a chance with "the fans" as they just thought he was a "smart arse kid".
I went and had a quick look at his blog and will go back at a later time to look at it in more detail.

Yes me be very happy that the thermometer is showing numbers a little closer to the amount of candles on me B-day cake.
Me is still a fan of the original Trek. The effects are better in the new generation, but the original series had contributions from so many of Me favorite authors that Me finds it hard to switch.

I'm finally recovered and catching up on blogging! see you around.