A Bit o' Blarney For Me Blog Buddies

Aye, I might be a wee bit small, but don't let me looks deceive you. This leprechaun walks tall and carries a big shillelagh.

Glory be, another St. Patty's Day is upon us. 'Tis on this day the Irish population increases ten-fold world wide. It forces us of real Irish blood to do our celebratin' in the safety of our homes. We let the Irish-wannabes make fools ot themselves on the 17th of March. After all, we can have our pick of the other 364 days.

You lads and lassies might be offended by me greeting here, thinkin' I be tellin' the lot of you to kiss my arse. Nae, nothing could be farther from the truth. It be an option for those who might not want to kiss a face covered in a scruffy beard, so I be offering up some smooth cheeks for you to kiss.

Now, while you be pretendin' to be Irish, wearin' the green, drinkin' your green beer and watchin' the "The Quiet Man," here's a servin' of some Irish humor for you to digest:

As soon as she had finished parochial school, a bright young girl named Lena shook the dust of Ireland off her shoes and made her way to New York where before long, she became a successful performer in show business.
....Eventually she returned to her home town for a visit and on a Saturday night went to confession in the church which she had always attended as a child. In the confessional Father Sullivan recognized her and began asking her about her work. She explained that she was an acrobatic dancer, and he wanted to know what that meant.
....She said she would be happy to show him the kind of thing she did on stage.
....She stepped out of the confessional and within sight of Father Sullivan, she went into a series of cartwheels, leaping splits, handsprings and back flips. Kneeling near the confessional, waiting their turn, were two middle-aged ladies. They witnessed Lena's acrobatics with wide eyes, and one said to the other:
..."Will you just look at the penance Father Sullivan is givin' out this night, and me without me bloomers on!"

Three guys, one Irish, one English, and one Scottish, are out walking along the beach together one day. They come across a lantern and a Genie pops out of it. "I will give you each one wish, that's three wishes in total", says the Genie.

The Scottish guy says, "I am a fisherman, my Dad's a fisherman, his Dad was a fisherman and my son will be one too. I want all the oceans full of fish for all eternity." So, with a blink of the Genie's eye FOOM! the oceans were teaming with fish.

The Irishman asks, "I'm very curious. Please tell me more about this wall." The Genie explains, "Well, it's about 150 feet high, 50 feet thick, protecting England so that nothing can get in or out."

The Irishman says, "Fill it up with water."

Spanish singer Julio Iglesias was on television with British TV host Anne Diamond when he used the word 'manana'. Diamond asked him to explain what it meant. He said that the term means "maybe the job will be done to-morrow, maybe the next day, maybe the day after that. Perhaps next week, next month, next year. Who cares?"
....The host turned to Irishman Shay Brennan who was also on the show and asked him if there was an equivalent term in Irish. "No. In Ireland we don't have a word to describe that degree of urgency," replied Brennan. 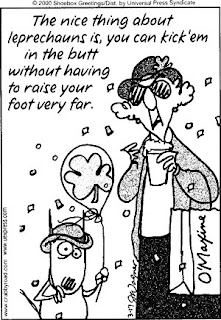 McQuillan walked into a bar and ordered martini after martini, each time removing the olives and placing them in a jar. When the jar was filled with olives and all the drinks consumed, he started to leave.

"S'cuse me," said a customer, who was puzzled over what McQuillan had done. "What was that all about?"

"Nothing," he replied, "me wife just sent me out for a jar of olives."

An Irishman, an Englishman and a Scotsman go into a pub. Each orders a pint of Guinness. Just as the bartender hands them over, three flies buzz down and land-- one, two, three-- in each of the pints.
....The Englishman looks disgusted, pushes his pint away and demands another.
....The Scotsman picks out the fly, shrugs, and takes a long swallow.
....The Irishman reaches in to the glass, grabs the fly between his fingers and shakes him as hard as he can, shouting "Spit it out, ya bloody bastard! Spit it out!"

Before I take leave of you, here are some Irish toasts to utter over your pints:

"Here's to women's kisses, and to whiskey amber clear;
Not as sweet as a woman's kiss, but a darn sight more sincere!"

No.927
Curmudgeon responsible for this post: Hale McKay at 5:11 PM

I was gonna kiss you 'til I saw the leprechaun.:) You've served up some really cute jokes and cartoons in honor of the day. Happy St. Paddy's to you.

Ain't that just the luck of the Irish?

If ain't me face, it be my butt keeping me from getting kissed by the lassies.

Ah, well, perhaps your luck will change, especially when the leprechaun's butt disappears at midnight.:)

Aye twas a grand post!
I hope you had a wonderful St. Patrick's Day!
Huggles

3 drunk Irishmen were walking home via the cemetary one night. Patrick noticed a particular headstone and yelled to the other 2, "Wow, according to the birth & death dates, old Michael here lived to the ripe old age of 92!"

"Well, that ain't nothin!" Jeremy yelled back. "Old Marcus over here lived nigh on to be 98!"

Seamus yelled back, "Miles... from Dublin!"

This is a genuine quote from a conversatian with an Irish electrician. Recounting a conversation he had with a customer Brian said,"AND ANYWAY HE SAID TO ME, THIS THAT THERE and THE OTHER, ETC. ETC.SO I TOLD HIM BLAH BLAH BLAH AND THAT WAS THAT"

Now if that isn't talking out of your arse I don't know what is.

Happy St. Paddy's day to you too.

Raggedy, you are a fine lassie for sayin' so.

LOL! I like it, Carolyn. If I'd have seen that one, it would have been part of this post.

A definite Irish conversation, Cathy, if I heard one.