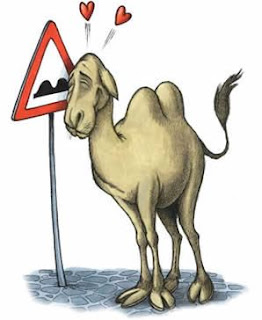 In ye muddled olden times of lore,
When the men were not so bold;
'Twas the weak who went off to war,
And heroes wrote their tales told.

Glorious were the words of scribes
About the battles bloody and hellish,
So much enhanced in banal diatribes
With such flair meant to embellish.

Only thus that never shall be forgot,
A story much loved and oft recalled
Of the fabled kingdom of Camel Lot,
And its honored King Archie the Bald.

Time and victors write our history,

And record the epic tales and acts;
So to no one should it be a mystery
Why accounts have all the wrong facts.

Cited one Englishman, "I'll take a trip
To buy property with an ocean view."
So with family he sailed off on a ship
To the Red Sea, so rife with camel doo.

He met a man of magic named Irving,
He'd found sleeping in a large red urn;
And then in mystical displays unnerving
He granted the man three wishes in turn. 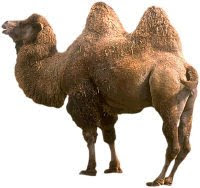 Among his wishes: greatness for his son,
A way to make a living in that desert land,
And shelter from the ever sweltering sun.
So his home became an oasis in the sand.

Laying out a mound of fresh camel dung,
He shoved a spade into the foul dropping,
Saying, "Your lad while he is still young
Will remove yon spade and become a king!"

Often historians will turn events around;
A spade in dung becomes a sword in stone,
Because in the story the English had found
An epic tale they could call their very own.

Lament not for Archie the Bald my friends,
Around the Red Sea he will not be forgot;
For the legend about this king never ends
Of his dealership, Archie's Used Camel Lot ! 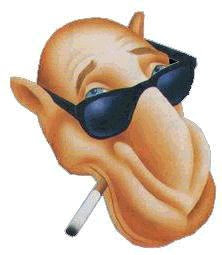 Yes, the names and places have changed, but the legends live on. Who's to say which came first: Archie or Arthur? Irving or Merlin? Camel Lot or Camelot? A spade or a sword?

The observant among the readers of this literary jewel may have spotted a hidden message in the text. No? You might say it is a subtitle. You might say it's a not so subtle subliminal message.

The famous, but currently unemployed Joe Camel says, "You have think out side the box and boldly.

No.928
Curmudgeon responsible for this post: Hale McKay at 8:15 PM

I gotcha. LOL. Did I get it? Or did you get me? Did anybody get anything? Only the camel knows, and he ain't talking.

Nah, it wasn't that hard or so cryptic anyway.

I shouldn't have put the cart before the horse and sent the e-mail before the post.

Whew! I hate letting cats out of bags. It was clever -- cryptic, too. If I hadn't been quasi out of my quasi-comatose state, I wouldn't have gotten it.:)

I forgot what I was going to say now, I got distracted by the back and forth in the comments...

Has anyone mentioned to you that you're getting weirder? But that's okay. I tend to like weirdos.