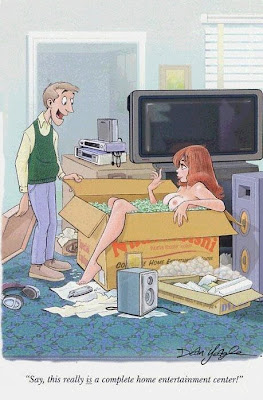 "Honey, come in here. I want to show you something."

"Uh-oh!" I thought when I came home from work. "She's found something on some site ... something that's going to require manual labor, for me of course."

You see, around my domicile "Honey come see" invariably equals a Honey-Do project. What was it this time? A painting scheme she liked? Lighting fixtures? Not another landscaping job? ( Shudder ) A plumbing project?

Hey! It was only 15 months ago that I had painted and wallpapered the bathroom, laid new vinyl tiles on the kitchen floor, and replaced the flooring in the back hall!

Apparently I didn't seem to be in much of a hurry 'to come and see,' cause she called out, "Don't you want to see?" Then there was the 'crushing blow to the mid-section,' when she announced, "I'm going to buy this. It's the cheapest price I've seen anywhere!"

Head hung in submission, feeling like a condemned man taking that last walk to face the ultimate punishment, I answered, "I'll be right there, let me pour myself a cup of coffee. I just walked in the door."

I tossed around the urge to strengthen my coffee with something a little more high octane than milk. If Bob Barker had been close at hand, I would've traded for what lie behind curtain number three.

As I approached her, more and more of the monitor screen became visible beyond her shoulder. And what to my wondering eyes should appear..? If dancing sugar plums exist, they were truly dancing in my head! 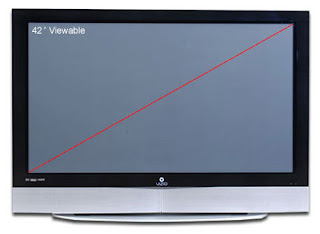 An Affordable 42" Plasma HDTV: The P42HDTV offers all the features and benefits to enhance your home theater experience, while remaining affordable.

10,000:1 Contrast Ratio : For deep blacks and brilliant colors, the high contrast ratio of our television enhances every program you enjoy to watch.

As I read the description and tried to keep my eyes attached to the optic nerves, I felt my heart skip a beat. My breathing became labored. Sweat formed on my brow.

I muttered under my breath, "Mr. Barker, disregard that trade for curtain number three!" 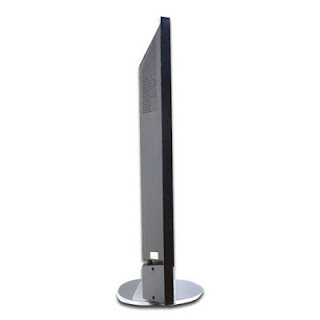 It's been my experience that "luxury toys" were the domain of the male of the species. I have "lusted in my heart," and I am not talking about Jimmy Carter's admitted lust, at the prospect of having a high-def big screen TV.

I say lusted, but I am also practical. These HDTVs, especially the plasma ones, are at the high end of the consumer food chain. This baby cost more than my last truck!
I was speechless, by design, lest I began stammering and blubbering, the likes of which I haven't displayed since I first saw the ending of "Old Yeller."

I remember when we "upgraded" from a 19-inch TV to a 30-inch screen. It felt then like I was in the front row of a movie theater. This, this was another 12-inches larger! I glanced at my arm, for I had pinched myself so hard that I'd nearly drawn blood.

I suddenly realized that she been talking and reading the printed matter on the screen the whole time I had been all but fossilized in shock. "You don't like it?" She was asking. "You don't think that's cheap?"

If I had been thirty, even twenty years younger, I would have been leaping and clicking my heels together. I fought the urge to give her a high five. A rebel yell was welling in my throat. I managed to reply, "Yeah, it's nice and that sure is a great price." It was painful but I added, "But it's still a lot of money, dear."

I nearly lost my balance when she retaliated, "We'll use the tax refund money, no problem!" I was dumbfounded. Did I dare remind her that she had already earmarked that money for new windows and the garage roof? If I did bring it up, just whose bubble would be burst? Talk about a dilemma!

I glanced at the calendar next to her PC and noted that it was still ten days until April Fool's Day! That would be a cruel and heartless joke for her to be playing on me! I took on a savoir-faire air when I finally said, "You know that I've never stopped you from buying anything, along as it doesn't put too much of a strain on the budget."

That exchange took place yesterday. Nothing of the subject has been mentioned since. Did I do the right thing by sequestering my excitement? Did I appear to be uninterested? Do I dare broach the subject, and if so, how long should I wait?

Ah, but hope springs eternal! What do I find in my e-mail box? She sent me an e-mail linking the pages with that TV! She sent from the other room, a scant three feet away on the other side of the wall next to me. The subject title of her e-mail: "This is the TV I'm going to buy."

No.932
Curmudgeon responsible for this post: Hale McKay at 10:00 PM

I'd like to have one of these new HDTV's with all the goodies! ~ jb///

If you are really serious about an HDTV, check out the Sharp Aquos. We recently bought a 32" and it is plenty big enough for our 22" X 17" room.

The picture is great.

Wow, that sounds like a terrific new toy. You're going to enjoy that so much.

Wow! That is awesome! I'm sure you will get a lot of enjoyment from it!

Hope you have a terrific day!