A Caws to Save the Planet 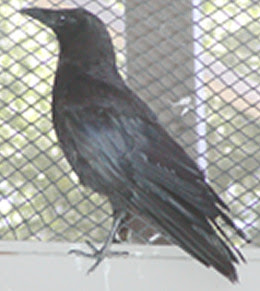 The common crow is one of the most intelligent birds. Its complex vocal chords can vary their “caw-caw” sound to express warning, threat, taunting and cheer. They have also been known to sound out words when taught. They are charcoal black and 17-21” in length. 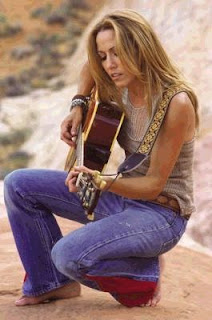 Oops! Wrong crow! Sorry about that.

The 'If It Makes You Happy' singer, who spent two weeks touring the US on a Stop Global Warming College Tour, is convinced one square per visit is sufficient.

Sheryl writes on her tour blog: "I propose a limitation to be put on how many squares of toilet paper can be used in any one sitting. I think we are industrious enough people to make it work with only one square per restroom visit, except, of course, on those pesky occasions where two to three could be required."

(Pictured at the right is her personal facilities on her tour bus.)

O...kay! How about a show of hands. How many of you are prepared to use just one square of toilet paper every time you relieve your self? How do you spell relief ?
I'd spell it ...M-e-s-s-y!

This comes from the same person who once suggested that we don't use napkins. She actually invented and has a patent on detachable shirt sleeves to be used at restaurants and homes instead of napkins! (My reply to that, why should they be detachable? I can wipe my mouth with my shirt sleeve while it's still on the shirt, can't you?)

Here's some facts about our beloved rectal stationery:

The average tear is 5.90 sheets of TP.
44% wipe from front to back reaching from behind their backs.
60% look at the paper after they wipe. -(Wannabe artists)-
42% fold,
33% crumple,
8% do both fold and crumple,
6% wrap it around their hands.
50% say that they have wiped with leaves. -(Watch the Poison Ivy)-
8% have wiped with their hands. -(Short order cooks)-
2% have wiped with money! -(All this time I thought George Washington had a moustache!)

Blame it all on Johnny Carson.*

There have been shortages of many things throughout history - oil, rubber, coffee, medicine, and so on. Yet, one of the most interesting shortages - the shortage of toilet paper - was one that should never have occurred.

It actually all started as a joke. Johnny Carson was doing his typical NBC Tonight Show monologue on December 19, 1973.

Of course, Johnny, like most talk show hosts, had a staff that helped write his monologue. His writers had heard earlier in the day about a Wisconsin congressman named Harold Froehlich. Froelich claimed that the federal government was falling behind in getting bids to supply toilet paper and that "The United States may face a serious shortage of toilet tissue within a few months". 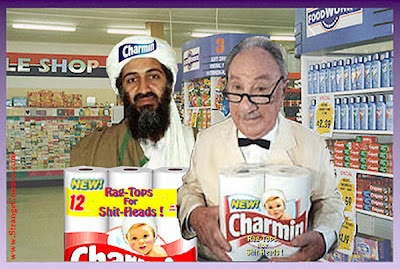 His writers decided to include a joke based on this quote in Carson's monologue. He said "You know what's disappear-ing from the super-market shelves? Toilet paper. There's an acute shortage of toilet paper in the United States."

Too bad they couldn't see the consequence of this statement. You may not be aware if you are young, but the early 1970's was a time of shortages - oil in particular. The next morning, many of the 20 million television viewers ran to the supermarket and bought all the toilet paper they could find. By noon, most of the stores were out of stock! Stores tried to ration the stuff, but they couldn't keep up with demand.

Johnny Carson went on the air several nights later and explained that there was no shortage and apologized for scaring the public. Unfortunately, people saw all the empty shelves in the stores, so the stampede continued.

Scott Paper showed video of their plants in full production to the public and asked them to stay calm - there was no shortage. The video was of little help. The panic fed itself and continued.

They finally got the shelves restocked three weeks later and the shortage was over. It is the only time in American history that the consumer actually created a major shortage (I don't think that the "shortage" of Barbie or Power Ranger dolls at Christmas time could be classified as a real shortage!).

And to think that it all started as a joke. (It would have been a good time to have played some pranks with "No Tear Toilet Paper.")

Here's a quick look at the interesting and sometimes comical history of toilet paper.(Everything you wanted to know but were afraid to ask:)

Obviously, toilet paper has not been around forever. We can be pretty sure that the caveman did not stop at his local Mega-superstore to pick up a case pack of Charmin. In fact, Since humans are the only animals that have the dexterity to actually wipe themselves after each defecation, it is currently believed that the original material used for cleaning (to put it politely) was leaves and sticks.

Of course, where you lived help determine the material of choice. Mussel shells were very popular in coastal regions prior to toilet paper's popularity (approx. 1900). If you were lucky enough to be raised on the Hawaiian islands, you may have used good old coconut shells. If you were born into royalty, like Louis XIV, you would have used wool or lace for added comfort.

In India and the Arab world, the most popular tool to use today (not that I have witnessed this) is the hand - the left hand to be specific. Of course, they cleanse their hands after this dirty deed. Many Arabs consider the Western practice of using paper to be disgusting - they feel that you always leave a residue by following this practice. They can't see how paper can actually get you perfectly clean.

Some historians consider this the reason why we shake with our right hands - because traditionally the left hand was the dirty hand!

Islamic tradition prescribes that you should wipe with stones or clods of earth, rinse with water, and finally dry with linen cloth. Pious men actually carry clods of earth in their turbans and carry small pitchers of water solely for this purpose. These men traditionally blot the end of their penis with pebbles or clods of earth. Others blot against a wall, which gave rise to a practical joke among the non-Muslims living around the Eastern Mediterranean - they dusted the outdoor walls at penis level with good old ground hot pepper. Ouch!

In ancient Rome, all public toilets had a sponge attached to the end of a stick which soaked in a bucket of brine (salty water). The rich used wool and rosewater. 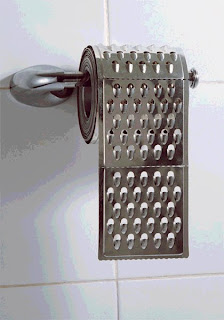 During the late Middle Ages, the French invented the bidet for rinsing of both sexes (clearly, the original models did not have modern plumbing). During WWI, British and American troops found these devices in the brothels that they frequented, leading them to assume that they were only used by women for vaginal douching. In other words, men no longer use them.

The material of choice among colonial America was corn cobs. When daily newspapers became commonplace in the 1700's, paper became the material of choice (I guess that one could say that Gutenberg's printing press caused the toilet paper revolution). Lord Chesterfield (1694-1773) wrote in a letter to his son that one should always carry with them a cheap copy of the Latin poets so that he would have something educational to read while on the pot, as well as having a good use for each page after reading it (This is not a quote, just a story). This lead to a major problem in England - the landscape was littered with paper - they didn't have modern sewers to take the stuff away from our sight.

In the late 19th century, the Sears catalog became popular in rural America. People simply hung it up on a nail and had a free supply of 100's of pages of absorbent, uncoated paper. Corn cobs were still holding as a strong second place contender, however. Use of the Sears catalog declined in the 1930's due to the fact that they started printing on glossy, clay-coated paper. Many people complained to Sears about this glossy paper (Can you imagine writing a letter to Sears: Dear Sir, I want to register a complaint about your new glossy catalog paper. It is no longer soft and absorbent...)
.
The first actual paper produced for wiping was in England in 1880. They were individual squares sold in boxes, not rolls. This paper was very coarse - the type the British prefer today. Americans like the soft, fluffy type, which was introduced in 1907. The original American product was sort of like crepe paper, if you remember that stuff from kindergarten. 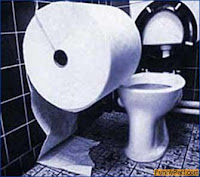 I have decided to be prepared, you never know, but our environmentally conscious President,George Dubya Bush, just might buy into her plan.
....Although I needed a two-wheel dolly and someone else to help, I picked up a special roll of toilet paper designed specifically to be used one sheet at a time. It probably took 14 Redwoods and Pinocchio to produce this roll of paper, but at least I'll be doing my part to help save the planet.

I do wonder though, just when was it that Gene Roddenberry was inspired to dream up "Klingons around Uranus?"

No.966
Curmudgeon responsible for this post: Hale McKay at 9:38 PM

Boy that post got way off topic there Mike and you didn't even mention Russell.

You are amazing!! How funny and amusing..I read it twice (and now I have to figure out which percentages I fall in!!)

BTW..hope you got my e-mail.