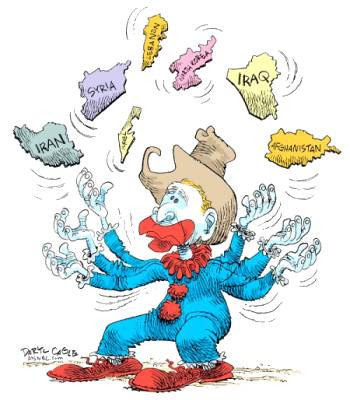 (Song Parody: to the tune of
"See The Funny Little Clown"
as sung by Bobby Glodsboro)

CONGRESS PLACE USA
- (to the tune of "Harper Valley PTA" as sung by Jeannie C. Riley )

I wanna tell you all a story 'bout a Washington DC quack
Who had a penchant for war and sent our young men to Iraq.
Well the people protested one afternoon and didn't even stop to play
And they said, "George we got complaints from the people of the USA,
Well they said, "Mr. Prez'dent you're wearing our patience too thin,
It's reported you've been thinkin' of the Weapons of Mass Destruction
And we don't believe you oughta be wastin' our young men this way."
And it was voiced by the majority of the people, USA.

Well it happened that Congress was gonna meet that very afternoon;
They sure were angry when the Prez'dent said we need troops soon
And as he talked at the microphone there were lies in all he had to say
He said, "I want some more young soldiers over there in harms way!
Well there's Sadam Hussein a hanging over there from the end of a rope
And you Senators are trying awfully hard to make me look like a dope.

Mrs. Clinton what makes you think running for prez'dent you'll go far,
And can you please tell us why your husband didn't ever smoke that cigar?
Well, Ted Kennedy couldn't be here cause he stayed late at the bar again.
And you all keep tryin to tell me there's no Weapons of Mass Destruction,
And then you have the nerve to tell me you think as Prez'dent I'm crap;
Well this is just the Congress Place and you're all Washington Democrats."

No.967
Curmudgeon responsible for this post: Hale McKay at 8:43 PM

Poor Mikey. If I'd have known you were waiting to attack me, I wouldn't have turned my attack tree on you. I promise. I'd have given you a different kind of wood!

Hmmm... these songs have too many sour notes for me. I don't feel it. Sorry.

ROTFL! By the way, did you happen to see the funny little Texan "dancing" with the African dance troupe the other day? I just about wet myself laughing.

very funny! and btw, i enjoyed the last post about toilet paper, too. imagine having a bad case of diarrhea and only being able to use 1 sheet. crazy!

If someone sings that Harper Valley parody and makes a video, I want to be the first to hear about it!