Who Left the Door Open? 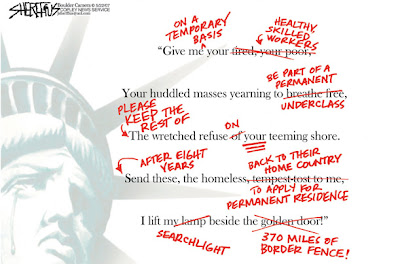 It is reassuring to know that our tax dollars are being well spent. Case in point: to dissuade illegal immigrants from crossing the border from Mexico into the United States, our politicians and engineers have proposed a fence 370 miles long. Inasmuch as there are 1900 miles of borders separating the two countries, that fence will only serve as a bulletin board for posting want ads for cheap labor.

While on the subject of immigrants, it seems a certain Hollywood producer is working on a new movie using foreign born actors. The film will be an action docu-drama about famous composers. Signed on to appear in the film, among others, are Sylvester Stallone, Jean-Claude Van Damme and Arnold Schwarzenegger.

To insure that he would have a cast with box office "oomph," the producer allowed the stars to select the famous composer they would portray in the film.

"Well," Stallone said, "I've always admired Mozart. I would love to play him."

"Chopin has always been my favorite," said Van Damme. "I'll play him."

The producer was very pleased. He then said, "That sounds splendid. But who do you want to be, Arnold?"

Schwarzenegger looked him square in the eye and said, "I'll be Bach!"

Must Be A Yankee Fan

"The Jewish people have observed their 5758th year as a people," . . .
the Hebrew teacher informed his class. "Consider that the Chinese have observed only their 4695th. What does this mean to you?"

After a reflective pause, one student volunteered, "Well, for one thing, the Jewish people had to do without Chinese food for 1063 years."

At a Jewish Seder, they had whole wheat and bran matzoh, fortified with Metamucil.
. . .The brand name, of course, is "Let My People Go". . .

A Polish immigrant went to the DMV to apply for a driver's license.

First, of course, he had to take an eye sight test.

One day, an immigrant from Poland entered a New York Police Precinct to report that his new American wife was planning to kill him.

The Copper on duty was intrigued by this and asked, "How sure are you that she is gonna kill you? I mean, did she threaten to kill you?"

"Well, did you hear her tell someone else that she's gonna kill you?"

"Did someone tell you that your wife is gonna kill you?"

"Then why in Christ's name did you think she's gonna kill you?" asked the exasperated police officer.

"Because I found bottle on dresser and I think she gonna poison me!" He handed the police officer the suspect bottle.

The police officer took one look at the label on the bottle and started to laugh out loud. The immigrant became indignant and said,

"Hey man, what so funny? Can't you see what the label on bottle says, 'Polish Remover'?"

Two vampires wanted to go out to eat . . .
. . .but were having a little trouble deciding where to go. They were a little tired of the local food in Transylvania and wanted something a little more exotic. After some discussion, they decided to go to Italy because they had heard that Italian food was really good.

So off they went to Italy and ended up in Venice. On a bridge over one of the canals, they hid in the shadows and waited for dinner. A few minutes later they noticed a young couple walking their way. As they neared, the vampires made their move. Each vampire grabbed a person, sucked them dry and tossed the remaining bodies into the canal below. The vampires were extremely pleased with their meal and decided to have seconds. Another young couple approached a few minutes later and suffered the same fate as the first - sucked dry and tossed into the canal below.

Our vampires are now fairly full but decide to get dessert. In a short while a third young couple provides just that. As with the first two couples, these people were also sucked dry and tossed over the rail into the canal.

The vampires had had a marvelous dinner but it was time to head back home. As they started to walk away they began to hear singing. They were puzzled because no one else was on the bridge. As they listened, they realized that it was coming from the canal. They looked over the rail and saw a huge alligator in the water under the bridge, feasting on the bodies.

They listened as the alligator sang:

You don't know what the alligator sang, do you?

Sorry, honey! (My wife is Italian.)

Heh. You switched the Humpback for Vixens.:-)