Solution to Save Gasoline

Bush wants us to cut the amount of gas we use.

The best way to stop using so much gas is to deport 11 million illegal immigrants! That would be 11 million less people using our gas. The price of gas would come down.

Bring our troops home from Iraq to guard the border. When they catch an illegal immigrant crossing the border, hand him a canteen, rifle and some ammo and ship him to Iraq . Tell him if he wants to come to America then he must serve a tour in the military. Give him a soldier's pay while he's there and tax him on it.

After his tour, he will be allowed to become a citizen since he defended this country. He will also be registered to be taxed and be a legal patriot. This option will probably deter illegal immigration and provide a solution for the troops in Iraq and the aliens trying to make a better life for themselves.

If they refuse to serve, ship them to Iraq anyway, without the canteen, rifle or ammo. 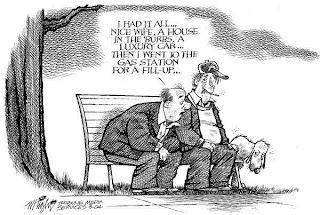 So, you think a gallon of gasoline is expensive, huh??

So next time you're at the pump, be glad your car doesn't run on Nyquil, or Pepto Bismol, or Scope, or Whiteout!!!!

My wife wanted to go somewhere expensive for our anniversary, so I took her down the street to the Sunoco station.

I have my car towed to work because it’s cheaper than buying gas.

All in favor of conserving gasoline, please raise your right foot.

I saw a guy on the street corner, holding up a hat and a sign that said, “Wife and 2 Cars to Feed.”

For our vacation this summer, we’re thinking it will be cheaper to just mail the car.

I like the Carlin solution Mike, should make quite a difference.

Wait a minute. You can get milk for about $3 a gallon. 4 pints worth. Now all we need is a car that runs on milk.

The Carlin solution sounds like something Robert Heinlein might say.
Now if Me could only get me wheels to run on piss, me would be able to take the car out for a joy ride.
Better yet, me could gather up a team of illegals and harness them to the van and have them pull me to work Ben Hur style