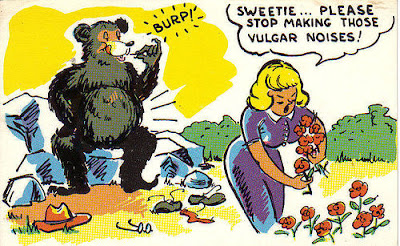 An atheist was taking a walk through the woods. "What majestic trees! What powerful rivers! What beautiful animals!", he said to himself.

As he was walking alongside the river he heard a rustling in the bushes behind him. He turned to look. He saw a 7-foot grizzly charge towards him. He ran as fast as he could up the path. He looked over his shoulder and saw that the bear was closing in on him. He looked over his shoulder again, and the bear was even closer. He tripped and fell on the ground. He rolled over to pick himself up but saw the bear right on top of him, reaching for him with his left paw and raising his right paw to strike him.

At that instant the Atheist cried out: "Oh my God!" Time stopped...the bear froze...the forest was silent.

As a bright light shone upon the man, a voice came out of the sky: "You deny my existence for all of these years, teach others I don't exist, and even credit creation to a cosmic accident. Do you expect me to help you out of this predicament? Am I to count you as a believer?"

The Atheist looked directly into the light, "It would be hypocritical of me to suddenly ask You to treat me as a Christian now, but perhaps could you make the BEAR a Christian?"

The light went out. The sounds of the forest resumed. And then the bear dropped his right paw, brought both paws together and bowed his head and spoke: "Lord, bless this food, which I am about to receive from thy bounty through Christ our Lord, Amen."

A priest, a Pentecostal preacher and a Rabbi all served as chaplains to the students of Northern Illinois University in Marquette. They would get together two or three times a week for coffee and to talk shop.

One day, someone made the comment that preaching to people isn't really all that hard. A real challenge would be to preach to a bear. One thing led to another and they decided to do an experiment. They would all go out into the woods, find a bear, preach to it, and attempt to convert it to their particular religion.

Seven days later, they're all together to discuss the experience. Father Flannery, who has his arm in a sling, is on crutches, and has various bandages, goes first. "Well," he says, "I went into the woods to find me a bear. And when I found him I began to read to him from the Catechism. Well, that bear wanted nothing to do with me and began to slap me around. So I quickly grabbed my holy water, sprinkled him and, Holy Mary Mother of God, he became as gentle a lamb. The bishop is coming out next week to give him first communion and confirmation!!!"

Reverend Billy Bob spoke next. He was in a wheelchair, with an arm and both legs in casts, and an IV drip. In his best fire and brimstone oratory he claimed, "WELL brothers, you KNOW that we don't sprinkle! I went out and I FOUND me a bear. And then I began to read to him from God's HOLY WORD! But that bear wanted nothing to do with me. So I took HOLD of him and we began to rassle. We rassled down one hill, UP another and DOWN another until we came to a crick. So I quick DUNKED him and BAPTIZED his hairy soul. And just like you said, he became as gentle as a lamb. We spent the rest of the week in fellowship, feasting on God's Holy Word, and praising Jesus."

They both looked down at the rabbi, who was lying in a hospital bed. He was in a body cast and traction with IV's and monitors running in and out of him. He was in bad shape. The rabbi looks up and says, "You fellows don't even know what trouble is until you try to circumcise a bear."

Hunter Without A Gun

There's this guy who shows up at a cabin where these hunters have gathered to hunt bear. Only he shows up without a gun.

The other hunters are very curious. "How you gonna get a bear without a gun?" they ask.

"Don't you worry. I'm gonna get myself a bear. Just wait right here and see."

The guy leaves the cabin and disappears into the hills for several hours.

Eventually he happens upon a bear asleep in his den and he kicks the bear and gets it really angry. As the bear wakes up, he starts to chase after the guy, so the guy starts running back towards the cabin.

Finally the hunters hear him running down the hill and yelling, "Open the cabin door! Open the door!"

They open the door and the guy runs into the cabin and holds the door open behind him. To the terror of the other hunters, an angry bear follows close behind, running into the cabin, too.

Then the guy slams the door shut, and says, "You skin that one. I'll go get another."

Curmudgeon responsible for this post: Hale McKay at 9:12 PM

Those were pretty near unbearable Mike.

LOL! I liked the job search jargon from the last post - reminds me of some intervies I've had.

Gday from down under
Go Bears
Cheers