Odor Ode To An Outhouse

The service station trade was slow
The owner sat around,
With sharpened knife and cedar stick
Piled shavings on the ground.

No modern facilities had they,
The log across the rill
Led to a shack, marked His and Hers
That sat against the hill.

"Where is the ladies restroom, sir?"
The owner leaning back,
Said not a word but whittled on,
And nodded toward the shack.

With quickened step she entered there
But only stayed a minute,
Until she screamed, just like a snake
Or spider might be in it.

With startled look and beet red face
She bounded through the door,
And headed quickly for the car
Just like three gals before.

She missed the foot log - jumped the stream
The owner gave a shout,
As her silk stockings, down at her knees
Caught on a sassafras sprout.

She tripped and fell - got up, and then
In obvious disgust,
Ran to the car, stepped on the gas,
And faded in the dust.

Of course we all desired to know
What made the gals all do
The things they did, and then we found
The whittling owner knew.

A speaking system he'd devised
To make the thing complete,
He tied a speaker on the wall
Beneath the toilet seat.

He'd wait until the gals got set
And then the devilish tike,
Would stop his whittling long enough,
To speak into the mike.

And as she sat, a voice below
Struck terror, fright and fear,
"Please use the other hole,
We're paintin' under here!"

Open Letter To a Redneck

I'm writing this letter slow because I know you can't read fast. We don't live where we did when you left home. Your dad read in the newspaper that most accidents happen within 20 miles from your home, so we moved.

I won't be able to send you the address because the last Arkansas family that lived here took the house numbers when they moved so that they wouldn't have to change their address.

This place is really nice. It even has a washing machine. I'm not sure it works so well though: last week I put a load in and pulled the chain and haven't seen them since.

The weather isn't bad here. It only rained twice last week; the first time for three days and the second time for four days.

About that coat you wanted me to send you, your Uncle Stanley said it would be to heavy to send in the mail with the buttons on, so we cut them off and put them in the pockets.

John locked his keys in the car yesterday. We were really worried because
it took him two hours to get me and your father out. 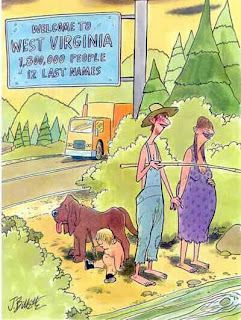 Your sister had a baby this morning; but I haven't found out what it is yet so I don't know if your an aunt or an uncle. The baby looks just like your brother....

Uncle Ted fell in a whiskey vat last week. Some men tried to pull him out, but he fought them off playfully and drowned. We had him cremated and he burned for three days.

Three of your friends went off a bridge in a pick-up truck. Ralph was driving. He rolled down the window and swam to safety. Your other two friends were in back. They drowned because they couldn't get the tailgate down.

There isn't much more news at this time. Nothing much has happened.

P.S. I was going to send you some money but the envelope was already sealed.

Bubba got drunk and died in a fire in his trailer caused by his cigarette. His body was so badly burned that the morgue needed someone to I.D. the body, so they called his two close friends, Jim-Bob and Billy-Joe to come and try to I.D. the body.

The mortician didn't say anything, but thought that was a little bit strange.

Then, he brought in Billy-Joe to I.D. the body. Billy-Joe looked at him and said' "Yep, he's burnt up sumpin' real bad. Roll 'im over." The mortician rolled him over, and Billy-Joe looked down at his butt and said, "Nuh-uh, 'at ain't Bubba.

The mortician said, "How can you tell?"

"What? He had two ass holes? Impossible!" said the mortician.

"Yep. Everyone in town knowed he had two ass holes, cause every time the three of us went to town, everyone would say, 'Here comes Bubba with them two ass holes.' "

No.1051
Curmudgeon responsible for this post: Hale McKay at 8:58 PM

Lawd, dontcha know that they's gonna be anudder one for Friday.