Put Me In, Coach, I'm Ready To Play 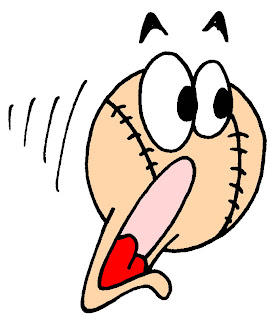 Ah, if it's summer it's time for baseball and softball. You watch one while drinking beer, and drink beer you playing the other! The two sports are played with similiar rules and equipment, but there are some other "subtle" differences:

If you see the pitcher warming up with a catcher in the bullpen ... It's Baseball.

If you see the pitcher warming up with a babe in his Chevy Blazer ... It's Softball.

If the manager is an older gentleman with a pot belly ... It's Baseball.
If the entire team is made up of older gentlemen with pot bellies ... It's Softball. 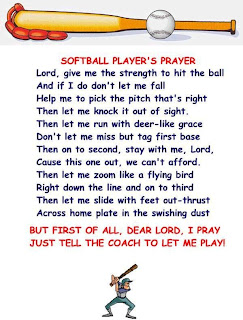 
Some Differences in Terminology

Home Run - Baseball : A fair ball hit out of the park which allows batter and any runner on base to score.
Home Run - Softball : A trip to the nearest establishment that sells beer.

Battery - Baseball : Term used for the tandem of pitcher and catcher of a team.
Battery - Softball : Power source of a vehicle from which a cable is connected to the coolers to keep beer cold.

Web Gem - Baseball : A spectacular fielding play that is shown repeatedly on ESPN after the game.
Web Gem - Softball : A spectacular fielding play with a glove on one hand and a beer in the other without spilling a drop.
Bench Clearing Incident - Baseball : When all the players run onto the field in defense of a team mate if he was, for example, beaned by the pitcher.
Bench Clearing Incident - Softball : When all the players run onto the field to escape a team mate's reaction to the combination of beers and five-alarm chili.

Baseball - Most everyone is familiar with scoring and can read a scoreboard. In a typical game situation: it may be the bottom of the fifth inning, with two outs, a runner on base, and the pitch count is three balls and two strikes.

Softball - Reading this scoreboard is ... well, a little different given the previous scenario. *Bottom the fifth - an empty Jack Daniels bottle. *Two out - when the girlfriend of an opposing player lifts her tee-shirt and flashes her breasts to distract the other team. * One On - someone else is using the toilet. *Count - how many beers each player has consumed to that point.

Got me a beat-up glove, a homemade bat, and a brand-new pair of shoes,
You know I think it's time to give this game a ride,
Just to hit the ball and touch 'em all, a moment in the sun,
It's gone and can tell that one goodbye.

No.1061
Curmudgeon responsible for this post: Hale McKay at 9:48 PM

This is the paragraph that makes this post a classic;

Softball - Reading this scoreboard is ... well, a little different given the previous scenario. *Bottom the fifth - an empty Jack Daniels bottle. *Two out - when the girlfriend of an opposing player lifts her tee-shirt and flashes her breasts to distract the other team. * One On - someone else is using the toilet. *Count - how many beers each player has consumed to that point.


In "A funny ting happened on the way to the pearly gates"
this line cracked me up;
This is surely proof positive that Alabama was at one time the Garden of Eden

Finally, someone has taken the time to answer the questions all America has been asking. (I can't speak for other countries.) We thank you, old chap.

And a special thanks to Peter for adding additional information.

Those were great! thanks for sharing...stop by and have a piece of birthday cake!