The Geek Shall Internet the Earth 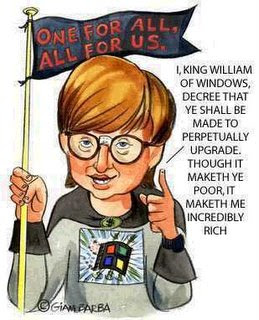 (The following is not an original work, but was taken from an article titled "A Totally Honest Message From Bill Gates," which appeared in Mad Magazine and was written by Mike Snider.)


Ever since a federal judge ruled that the Microsoft monopoly must be broken up into itty-bitty pieces, Bill Gates has taken his case to the airwaves in a series of pathetic, whiny image ads in which he portrays himself as a cuddly, well-intentioned innovator (as opposed to the vicious, back-stabbing, cutthroat robber baron we know he really is)! But if the chairman of Microsoft REALLY wants to improve his image, he come clean in ...

"Citizens of the world: I am Bill Gates, founder of Microsoft, and the Richest Man in the World! By Far!

Normally, I don't lower myself to talk to the public -- I dunno, I guess it's out of some justifiable feeling of superiority! But I'm making an exception now, because the U.S. Government, which is only slightly richer than me, is trying to do something very bad for you, the consumer, and, more importantly, for me! It's trying to break up Microsoft!

Incidentally, when I say I'm the "Richest Man in the World" I mean the "The Richest Man Ever in History." Just so we're clear on that!

Anyway, right now you're probably saying to yourself:

'Whoa! This guy's pretty damn sincere! I ought to be paying attention to what he says, instead of writing him off as a whining, desperate zillionaire who will do anything to protect his obscene cash flow!'
...'Who cares if all those rumors I've heard for two weeks without showering and attends board meetings smelling like a garbage dump are true? He really cares about me!'
...How can the breakup of Microsoft possibly be bad for me personally?'

Well, to anyone who knows the facts, it's obvious that breaking up Microsoft would be horrible for consumers!

See, every application we've ever put out contains millions of lines of "source code," that indecipherable mumbo-jumbo that only the computer -- and we here at Microsoft -- understand! Most of that source code is there just to get the PC to do what it's supposed to! But a tiny little bit of it is designed to do some extremely interesting things inside your computer, such as:

Translate every Microsoft Word document from English to Swahili, or Ancient Sanskrit, or those "Wingding" characters nobody knows what the hell are for! Sign up you and all the people in your Microsoft Outlook Address Book for a non-cancelable three-year subscription to the Microsoft Network! Make your Microsoft Excel program at work siphon off one dollar from everybody else's account into a file called "My-Embzzle$" and then transmit a copy of that file to your boss!

Pretty scary, eh? Did those wild-eyed anarchists at the Justice Department even consider these possible consequences to the consumer when they came up with the radical notion of a break up? I think not!

Of course, I'm not saying those things would automatically happen-- first we'd have to send out the prearranged signal to your PC from our corporate headquarters - but why take the chance?

Please don't get me wrong -- these aren't threats! "Threats" are wrong; threats are counterproductive; threats are liable to get the government even more pissed off at me than they already are! Let's just call them a "technical forecast," from an "informed industry source"!

But you have the power to make sure those things never occur! All you have to do is write, fax, or e-mail -- using Microsoft Outlook, of course -- your Congressman, Senator, Governor, Mayor, dogcatcher -- whatever!-- and tell them what a silly, silly, silly idea breaking up Microsoft is! --Oh, and also remind them that we know how to remote-access everything on THEIR hardrives, too!

In conclusion, let me say: May the Blue Screen of Death never visit your Windows-based PC, or at least no more than it does now -- which it won't, if you do exactly as I say!

With all my best-simulated-non-threatening "warmth," this is Bill Gates, the Richest Man in the Known Universe!"

No.1062
Curmudgeon responsible for this post: Hale McKay at 8:33 PM

I have suffered the Blue Screen of Death. Made me scream the Blue Language of Insane Rage at everything Microsoft. I had to hold my hand down to keep from calling Homeland Security on them.:-)