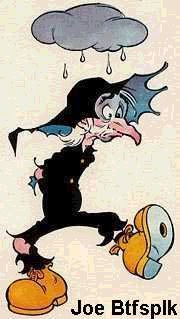 There was a dark cloud over my head today and it sure seemed hell bent to follow me everywhere I went!

Some of you will be familiar with Joe Btfsplk, a character from Al Capp's L'il Abner comic strip. He was always depicted with a dark cloud above his head. This pathetic man was a well-meaning soul, but he was a jinx, a pariah. Bad things always happened - to everyone else - whenever he was around.

My day started off well enough ... then I opened my eyes. I stubbed my toe on the dresser while executing that critical first-thing-out-of-the-bed-mad-rush-maneuver to get to the bathroom. It was occupied! I could hear the shower water running inside. You don't need me to tell you that the last thing you want to hear when you have to 'race like a piss horse' is the sound of running water!

While I was performing the modern day version of an Apache dance, standing first on one foot and then the other with the free leg in turn crossing and pressing hard against my groin, it seemed like an eternity. As it was, the dance was difficult due to pain in the injured toe. Not unlike crimping a garden hose to stay the water flow the dance was working, although I feared soon that the pent up pressure would eventually begin seeping from my eyes.

I wasn't surprised to find that the bathroom door was locked - from the inside. It was payback for all those earlier years of marriage grab-assing. Those were the good old days when I would stroll into the bathroom while she was in the shower and partake of grabbing her buttocks, cupping her breasts, or stroking the kitty. In later years I was forced to promise to keep my hands to myself on such occasions. I never was one for promises and as a result she began locking the door. In other words, there was a time and a place, and the mornings in the bathroom was no longer tolerated.

Anyway I digress. I found myself in the kitchen looking for an empty cola can or bottle, any suitable receptacle. That tempting 16-ounce glass was spared (Hey, I was getting desperate!) as I heard the sweet music of the bathroom door opening. What a relief it was as I dutifully contributed to rising level of the oceans.

Didn't I say in matters such as this, that I wasn't one for promises? As I left the bathroom I couldn't resist grabbing the edge of the towel she had wrapped around herself. Wise to my old tricks she managed to keep the towel about her, and loosening my grip. My arm, primed to pull, flew back and slammed my wrist against the door frame. (My wrist is still sore thirteen hours later as I'm typing this.) I know, that'll teach me.

Okay, husband and wife intimacies behind me, I was soon on the road on my way to work. It's not unusual to anoint several other drivers as number ones and today was no exception. When one asshole in a Sebring convertible decided to pull into the lane ahead of me without the courtesy of directionals, something told me to apply the brakes. WHAM! A panel truck at that very moment backed out a blind alley and plowed broadside into the asshole's car. Asshole number two who had been moments before tail-gating me decided to whip around me on the right.

I'm certain that there was some law of physics that could have been applied to next moment. When Car A was struck by Truck B and was pushed into the lane that Car C had just gunned himself into, then Car C was bound to be struck by Car A. Meanwhile Truck D, driven by myself was unscathed due to the application of the brakes. It was fortuitous that I was able to maneuver across the other two lanes and turn onto a side street and thus was able to put the accident scene far behind me.

About four hours later on the way to my third client I noticed steam coming from under my hood. I was in bumper-to-bumper traffic and could not turn for about three miles. I watched my temperature guage with great interest. With dread I watched the needle start to slowly rise. I cursed the several red traffic lights.

When I arrived in front of the clients house, I popped the hood. The water reservoir for the radiator was empty. The engine was wet. A hose had let go, or worse yet my radiator had sprung a leak. With the air-condition unit in place I could not locate from where the water and steam were escaping.

I was moving a china hutch for the client to retrieve some papers that had fallen behind it. I bent down to pick them up, but when I stood my shoulder hit the edge of a hanging picture. It fell from the wall and broke the glass. She really loved that picture too. I offered to replace the glass and have the picture remounted, but she refused. She said her daughter would take care of it. I asked her to let me know what the bill was and I would give her the money.

The engine cooled off during the two hours I spent with that client and thanks to her for allowing me to use her garden hose, I was able to top off the water level. I noticed her hose was leaking from a couple of pin holes. I hoped they were already there.

I made it to the next client without the engine over heating or losing any significant amount of water. I thought of that old saying wherein all things supposedly happen in threes. Let's see, there was the near accident, my radiator/and or hose, and the broken picture glass. Not being superstitious I did say to myself "That's three. I should be out of the woods." Then I suddenly remembered how my day had started. I had stubbed my toe and whacked my wrist. Uh oh, that made five!

This client had bought a new futon - still in the box. She wanted to know if I could assemble it for her. It was not something I was looking forward too at that point in time. Nonetheless I put it together without incident. Oops! I lied. I did scrape my knuckles against one of the bolts when I was moving it to where she wanted it situated in the room. The bleeding under control and a couple of bandages applied, I was none the worse for wear. Who's counting, but that was six! She gave me an empty gallon juice bottle which I filled with water to take with me on my trip home.

I pulled into the driveway at home with a cloud of steam trailing behind me.

I don't know if Joe Btfsplk's cloud will be with me tomorrow or not, but the spectre of it will remain on my drive to the mechanic's garage in the morning. (Sigh!) How much is it going to cost me? Cross your fingers and wish me luck, friends, that it is a hose and not the radiator!

It was in fact the radiator. It was cracked. Gotta love the engineering when radiators are made out of plastic!

As this comment was being typed, my truck is with the mechanic. It will be ready sometime today. Now it's just a waiting game for the double-edged phone call telling me it is ready and what the damage will be.

My work day was shot -YAY!

I have to work tomorrow to make up. -BOO!

Hi Mike ~~ Sorry it turned out to be the radiator, but glad it is fixed. You have an interesting job.
Thank you for the comments and I am glad you enjoyed the jokes etc.
It takes a lot of time reading all the things we want and don't have the time always. Take care, Regards, Merle.

Gee, Mike. Sounds like you had a truly great day!

But don't say you weren't warned. I've been writing regularly about the resurgence of the dreaded "C", and it sounds to me like it has you dead in its sights.

By the way. . . that old saying about bad things happening in series of threes is a myth.

P.S. I'm dying for the final chapters in "Her Cups Runneth Over."

Oh yes, the ever-present "C" effect, John. I should have known.