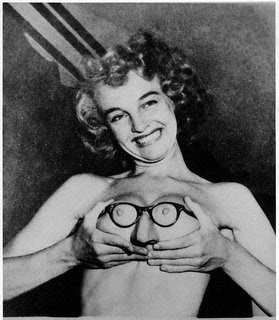 Q. How will everyone remember Bill Clinton in history?
A. The President after Bush
Q. What's the new game there playing in the White House?
A. Swallow the Leader
Q. What's Monica's favorite instrument?
A. She's good at the piano, but she sucks at the organ!
Q. What's the difference between Bill Clinton and Santa Claus?
A. Some people still believe in Santa Claus.
Q. What's the difference between Hillary and Bill?
A. Hillary doesn't get caught.
Q. What is the difference between Dan Quayle, Bill Clinton and Jane Fonda?
A. One has two boobs, the others *are* two boobs.
Q. Bill and Hillary and Al and Tipper takes a boat ride, the boat capsizes, who gets saved?
A. The United States of America!
Q. Why doesn't Bill like old houses?
A. He's afraid of the draft.
Q. Why does Hillary always get on top?
A. Bill can only screw up.
Q. When will there be a woman in the White House?
A. When Hillary leaves town.
Q. Why does Hillary want to have sex with Bill Clinton first thing in the morning?
A. She wants to be the first lady.
Q. What's Bill Clinton's idea of safe sex?
A. When Hillary is out of town.
Q. Did you hear that Monica Lewinsky turned Republican?
A. The democrats left a bad taste in her mouth.
Q. Why did Bill Clinton stop playing the saxophone?
A. He was too busy playing the hormonica.
Q. Do you know why Monica got a stain on her dress?
A. She didn't keep her mouth shut!
Q. Why did Bill Clinton name his new dog Buddy?
A. He couldn't bear to say "Come Spot... Come Spot!"
Q. What's green and smells like Monica Lewinsky?
A. The pool table in the oval office.

Q. How do Helen Keller's parents punish her?
A. By putting a plunger in the toilet.
Q. What is the name of Helen Keller's dog?
A. Nyah, nyu, yuh, yah.
Q. What is forty feet long and has eight teeth?
A. The front row at a Willie Nelson concert.
Q. What do you call 5 dogs with no balls?
A. The Spice Girls!
Q. What has four legs and no ears?
A. Mike Tyson's dog.
Q. What do you get when you cross Raquel Welch with Santa Claus?
A. A thank you from Santa!
Q. What does Woody Allen call an unborn baby?
A. A blind date.
Q. Did you see Dolly Parton's new shoes?
A. Neither did she.
Q. How come Mike Tyson's eye's water during sex?
A. Mace
Q. What does Ellen DeGeneris cook for dinner every night?
A. She doesn't, she eats out!
Q. Why can't the government put Magic Johnson on a stamp?
A. Everyone would be afraid to lick it.
Q. What's white and sticky and found on the bathroom wall?
A. George Michael's latest release.
Q. What do you call a man with a blackhead on his penis?
A. Hugh Grant.
Q. How did Helen Keller's mother punish her?
A. By rearranging the living-room furniture.
Q. What did Helen Keller do when she fell down the well?
A. She screamed her hands off.
Q. Why does Helen Keller masturbate with one hand?
A. So she can moan with the other.
Q. Why was Helen Keller's leg yellow?
A. Her dog was blind too.
Q. What did Helen Keller's parents do to punish her for swearing?
A. Washed her hands with soap.

And most of these are funny.

Loved the photo, too.

Hilarious, but you went too far with that crack about Willie.

We don't cotton to that kind of talk baout Willie down here in Texas.

You're pretty evil, you know that?

Travis, I think you are right, although the joke was aimed more at Willie's fans than he himself.

HOss, at least I omitted the dozen or so JFK, Jr. ones.

lol "He was too busy playing the hormonica." I liked that heh. Might be right those ppl saying his time passed in excuses