Ah, give me those good old days when we were single and playing the field. The bars and the clubs ... The pickup lines ... Ahem, the comebacks ... The dating ... The conquests ... Being shot down in flames ... 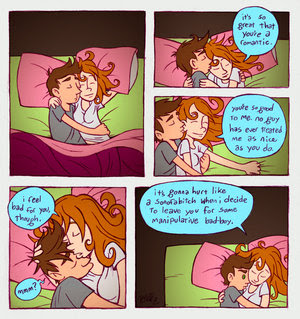 Man: "Haven't we met before?"
Woman: "Perhaps. I'm the receptionist at the VD Clinic."

Man: "Haven't I seen you someplace before?
Woman: "Yeah, that's why I don't go there anymore."

Man: "So what do you do for a living?"
Woman: "I'm a female impersonator."

Man: "How do you like your eggs in the morning?"
Woman: "Unfertilized !"

Man: "Hey, come on, we're both here at this bar for the same reason"
Woman: "Yeah! Let's pick up some chicks!"

Man: "I know how to please a woman."
Woman: "Then please leave me alone."

Man: "I want to give myself to you."
Woman: "Sorry, I don't accept cheap gifts."

Man: "Your body is like a temple."
Woman: "Sorry, there are no services today."

Man: "I'd go through anything for you."
Woman: "Good! Let's start with your bank account."

Man: "I would go to the end of the world for you.
Woman: "Yes, but would you stay there?

When the Cows Come Home

Two teenagers wander off to the bushes during a softball game on the outskirts of their small town and start necking. After a while the guy abruptly stops. "You know we've been doing this for weeks now and I think it's time we had intercourse," he pleads.

"Well, maybe," she says. "But I'm a virgin and I heard it hurts. Besides, all those people in the field may hear us."

The boy pauses and then says, "Hmmm, well then if it hurts start making cow sounds, and I'll stop. But if it feels good, start singing. That way no one will ever guess what we're really doing!"

Two young lovers go up to the mountains for a romantic winter vacation. When they get there, the guy goes out to chop some wood.
When he gets back, he says, "Honey, my hands are freezing!"

She says, "Well put them here between my legs and that will warm them up."

After lunch he goes back out to chop some more wood and comes back and says again, "Man! My hands are really freezing!"

She says again, "Well put them here between my legs and warm them up." He does, and again that warms him up.

After dinner, he goes out one more time to chop wood for the night. When he returns, he again says, "Honey, my hands are really freezing!"

There once was a farmer who was raising three daughters on his own. He was very concerned about their well being and always did his best to watch out for them. As they entered the late teens, the girls dated, and on this particular evening all three of his girls were going out on a date.
This was the first time this had occurred. As was his custom, he would greet the young suitor at the door holding his shotgun, not to menace or threaten but merely to ensure that the young man knew who was boss.

The doorbell rang and the first of the boys arrived. Father answered the door and the lad said, "Hi, my name's Joe. I'm here for Flo. We're going to the show, is she ready to go?" The father looked him over and sent the kids on their way.

The next lad arrived and said, "My name's Eddie. I'm here for Betty. We're gonna get some spaghetti. Is she ready?" Father felt this one was okay too, so off the two kids went.

The final young man arrived and the farmer opened the door. The boy started off, "Hi, my name's Chuck . . ." And the farmer shot him.

No.1090
Curmudgeon responsible for this post: Hale McKay at 9:53 PM

What other response can there be to such gems of humor?

You should make up a cheat sheet for women..those are great comeback lines!!!