The Winds of Unrest

He that troubleth his own house shall inherit the wind: and the fool shall be servant to the wise of heart. - Proverbs 11:29

Drifting on the fringes of somnolence last night, a late night movie was both my companion and antagonist. Sleep was desirous, it was 2:30 AM, but the film's appeal was strong. In the end, the film held me hostage until the obvious absence of credits gave way to an acappella voice singing "The Battle Hymn of the Republic."

Its title borrowed from the biblical scripture above, Inherit The Wind by anyone's standards, is a superb movie. Anyone who has seen it can easily understand why it has a lofty ranking among the greatest films of all time. Those who have never seen it, should consider correcting that mistake by adding it to their 'must-see' list of movies. 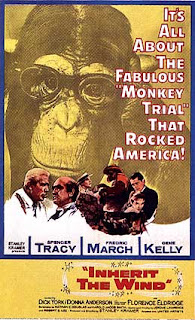 Inherit the Wind, based on a 1955 stage play by the same name, was released in 1960. It was an allegorical film based on the famous 1925 Scopes Monkey trial which pitted the teachings of the Bible's creationism against the theory of Evolution.

Although the names of those involved in the original trial were changed, there can be no question as to whom each member of the stellar cast portrayed. Spencer Tracy's Henry Drummond, Frederick March's Matthew Harrison Brady, Dick York's Bertram Cates, and Gene Kelly's E.K. Hornbeck, represented respectively Clarence Darrow, William Jennings Bryan, John Scopes, and H.L. Mencken.

As in the actual trial, the judge ruled against the teacher finding him guilty of illegally teaching evolution and fined him $100. The ruling was appealed and the case went before the Supreme Court only to have the charges dismissed.

I have seen that film several times over the years. Only after watching the court room scenes of it before finally falling to sleep last night, did I actually realize how laws and religious beliefs are still clashing to this day. However, it's not the intrusion of science upon religious sanctity that is in the news.

It is cruel irony that our right to the freedom of worship is being twisted and manipulated until that very "right," in and of itself, is being used to deny the rights of others. Somehow, our right to freely worship, as guaranteed by our Constitution, is also being interpreted to mean that others who have different beliefs now have the right to challenge our beliefs.

To what end? Prayer has been wrested from our schools. "The Pledge of Allegiance" has all but been outlawed because it contains the word "God." The patriotic songs, "God Bless America" and "The Battle Hymn of the Republic" are under siege because they too make reference to "God." How dare us use currency that expounds, In God We Trust !

The modern legal concept of religious freedom as the union of freedom of belief and freedom of worship with the absence of any state-sponsored religion, originated in the United States of America with the First Amendment which provided for the separation of church and state.

This issue was addressed by Thomas Paine in his pamphlet, Common Sense (1776):

"As to religion, I hold it to be the indispensable duty of all government, to protect all conscientious professors thereof, and I know of no other business which government hath to do therewith…"

The Virginia Statute for Religious Freedom was written in 1779 by Thomas Jefferson. It proclaimed:

"No man shall be compelled to frequent or support any religious worship, place, or ministry whatsoever, nor shall be enforced, restrained, molested, or burthened in his body or goods, nor shall otherwise suffer, on account of his religious opinions or belief; but that all men shall be free to profess, and by argument to maintain, their opinions in matters of religion, and that the same shall in no wise diminish, enlarge, or affect their civil capacities."

It is the duty of our courts to uphold the laws of the land, in particular the Constitution. It is not their charge to interpret or to adjudicate otherwise. Our laws allow people to practice atheism if they believe in no god. We are free to pursue faith as Catholics, Baptists, Episcopalians, Adventists, and yes, to also practice Islamic and Buddhist faiths. However, no where is it written or implied that any member of any faith can dictate the beliefs of others.

Funny, I never took the word "God" to mean a specific god, and therefore an affront to anyone who worships a different god. After all, aren't Allah and Buddha, for example, gods also?

I fear that the message of Inherit The Wind has been lost. The venue has changed, we are not in a court of law, but rather we arguing our cases in a court of life. This time around it appears that the 'Matthew Harrison Bradys/William Jennings Bryans' of the world are winning. We need the 'Henry Drummonds/Clarence Darrows' to balance the scales suspended from the hands of blind justice that have been tipped precariously toward injustice by ... the winds of unrest.

No.1082
Curmudgeon responsible for this post: Hale McKay at 9:56 PM

Excuse me for waxing serious and profound, but am I guilty of misinterpreting the 1st Amendment and the Constitution?

Hale ya can be a serious as ya need to be. You have the right idea here, but the problem with what's happening to our 'rights' is that there be plenty of folks spouting rhetoric about how one's beliefs surpesses anothers. The idea is simple to me. You live yer life yer way and Me will do the same. Me can't see how that interferes with friendship or freedom.

Hale, your posting is an excellent effort to resurrect Mr. Darrow.

While not a student of the Constitution, I don't believe you have misinterpreted it at all.

It is too bad that most of our spaceship earth traveling companions seem to be unwilling to think.

It seems so easy to let someone else think for us and tell us how to behave.

We need to learn how to BE.

Religion is, and should be, a personal thing. We all have the right to practice as we need, as long as it does not infringe on the rights of others. And this is the very argument used by fundamentalists of all stripes. When you believe as you do, which is different from my beliefs, you are infringing on my beleifs. I must do anything possible to MAKE you see the error of our ways.

Sometimes the truth hurts, but in this case you are right on. I hate someone trying to tell me how to live my life when they left their homeland because of persecution. I say to these people, quit trashing the country that gave you a home when you had no where else to go.