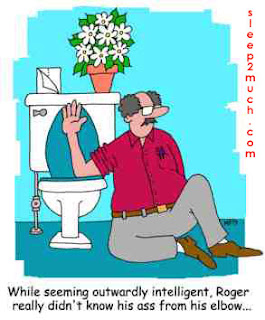 ADVICE FOR IDIOTS...
An actual tip from page 16 of the HP "Environmental, Health & Safety Handbook for Employees: "Blink your eyelids periodically to lubricate your eyes."

IDIOTS IN THE NEIGHBORHOOD...
I live in a semi-rural area. We recently had a new neighbor call the local township administrative office to request the removal of the Deer Crossing sign on our road. The reason: Many deer were being hit by cars and he no longer wanted them to cross there.

IDIOTS IN FOOD SERVICE...
My daughter went to a local Taco Bell and ordered a taco. She asked the individual behind the counter for "minimal lettuce. "He said he was sorry, but they only had iceberg.


Sighting #1: I was at the airport, checking in at the gate, when the airport employee asked, "Has anyone put anything in your baggage without your knowledge?" I said, "If it was without my knowledge, how would I know? "He smiled and nodded knowingly, "That's why we ask."

Sighting #2: The stoplight on the corner buzzes when it is safe to cross the street. I was crossing with an intellectually challenged co-worker of mine, when she asked if I knew what the buzzer was for. I explained that it signals to blind people when the light is red. She responded, appalled, "What on earth are blind people doing driving?"

Sighting #3: At a good-bye lunch for an old and dear coworker who is leaving the company due to "downsizing," our manager spoke up and said, "this is fun. We should have lunch like this more often." Not another word was spoken. We just looked at each other like deer staring into the headlights of an approaching truck.

Sighting #4: I worked with an individual who plugged her power strip back into itself and for the life of her could not understand why her system would not turn on.

Sighting #5: When my husband and I arrived at an automobile dealership to pick up our car, we were told that the keys had been accidentally locked in it. We went to the service department and found a mechanic working feverishly to unlock the driver's side door. As I watched from the passenger's side, I instinctively tried the door handle and discovered it was open." Hey," I announced to the technician, "It's open!" "I know," answered the young man.- "I already got that side."

Sighting #6: I work in a hospital and one day the doctor and I were asking a pregnant lady some questions upon admission to the maternity ward. When we asked her who we should call in case of an emergency, she stated "911".

Sighting #7: My daughter was going over to the neighbors house to visit but didn't want to miss a call from her boyfriend so she took the cordless phone with her. While at the neighbors she wanted to check back at home to see if her younger brother was okay. My daughter then picked up the neighbors phone and dialed our number. While waiting for someone to answer the phone at home, the phone she brought over with her began to ring. She immediately hung up the neighbors phone and answered our phone. There was no one there. She wanted to know who it was who called so she used our phone to call our house. The line was busy. Getting very frustrated she left the neighbors to go home and see who was on the phone. No one was on the phone. My daughter could not figure out what was going on until someone explained it to her.

Sighting #8: As systems manager of an answering service a few years back I had the pleasure of working with an especially ignorant doctor. Our system was trying to fax her messages to her place of business when a message came back informing us her fax was out of paper. When I called her office and told her about this she replied, "Oh, I'm all out of bond paper. Could you fax me some?" I'm right fuckin' on it, Babe.

Sighting #9: I was in McDonalds one time when the lady in front of me ordered a cheeseburger and requested no cheese. Now I don't know about you but that sounds like a fucking hamburger to me.

Sighting #10: Many years ago I worked in a delicatessen. The assistant manager had burnt something in the oven and smoke was pouring from the kitchen area. When the store manager came by and asked why she hadn't opened the emergency fire exit door to allow the smoke to go outside she said, "I thought about it but I couldn't find the key!"

Sighting #11: I was sitting at my University bar with some friends the other day when we overheard a man talking on his mobile phone. He was saying that he wanted to "buy, buy, buy" some shares and "sell, sell, sell" some shares. Unfortunately for him, his mobile phone actually began to ring!!! The laughter in the bar was heard for miles!! Now that's what I call an IDIOT!

Sighting #12: A friend of mine and I were on a little road trip with his wife driving. Everything was pretty quiet when she turned to us and asked, "If you are driving 70mph, about how far would you go in an hour?" Oh yeah, she's a smart one.

Sighting #13: Calling the telecommunication company to inform them my phone didn't work and that when I picked up the receiver its completely dead, the technician said from the other end "Are you calling from the number of the phone that does not work?"

No.1083
Curmudgeon responsible for this post: Hale McKay at 8:53 PM

I'm happy for that disclaimer... ;cause I was like, is hale mckay a WOMAN??? (number five).

I've known some idiots... and, much to my relief, they're not ALL me!

Thanks for commenting months ago... I'm back now.

What a long strange summer it's been!

I, too, am glad for the disclaimer. It is a good thing to "dis-remember" the source of things. Confessing that fact keeps you from being considered an idiot. At least for that act.

Wherever they came from, they made me laugh like an idiot.:-)

That last one actually happened to ME, just last week! We were calling using our cell phone to report that the house phone was totally dead - no dial tone - zilch. The "technician" (aka idiot) actually asked if I was calling from the dead phone.

My favorite personal one was when my then-teenage daughter with her brand new drivers license called to tell me the car wouldn't start, and she was pretty sure the problem was the battery was dead. I asked her what happened when she turned the key, and she told me, "Oh, it cranks and cranks, but it won't ever start." Battery, huh?