...And Now A Word From Our Sponsors

Commercials! You either love them or hate them - but mostly hate them. Because of their redundancy and frequency, commercials have left indelible images in our collective minds. 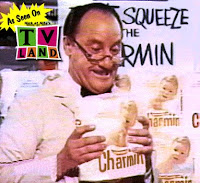 Over time I might forget Mr. Whipple, but not the Charmin he was touting. Some of you might be too young to remember him, but I'll bet that more than once you've heard the catchphrase, "Please don't squeeze the Charmin."

I could write a lengthy and nostalgic piece about the hundreds of products and the memorable characters featured in the commercials of the past, but I'm not going there. This post has more to do with contemporary advertisements, and the fault I find with them.

I would be remiss if I didn't begin with those prescription drug ads. You've seen them! They are the ones where the featured 'medicine' has more side effects than the applications for which they are designed.
....(It is reassuring that a product sprayed into my nostrils for a stuffy head may cause dizziness, nose bleed, or even death in some cases. I'm told to ask my doctor if the stuff is right for me. Good grief! The doctors are paid by the pharmaceutical companies to pimp the product - of course they're going to say it's safe!) 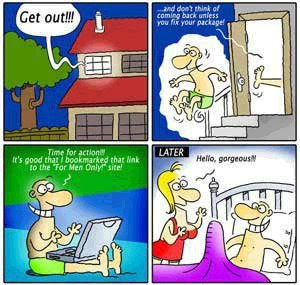 Then there are the ads for similar erectile products that not only promise satisfaction, but also suggest there is a possibility of erections lasting for four hours or more. If this occurs we are told to notify our physician immediately.
....(Ha! Like the average male is going to rush straight away to the doctor! More likely than not, it'll be the wife dragging his sorry ass to the doc because she wants to get some sleep!)

How about those ads for all those patriotic sales on Memorial Day?
....(Yeah, let's honor those who gave their lives for our freedom by flocking to the stores and buying products made in Asian sweatshops.)

Ah yes, those Bowflex products and their ilk! Those men and women with those amazing physiques sure look great.
....(Does anyone with a half a brain really think those people got in that shape from dicking around with flexible graphite rods for only 20 minutes three times a week?)

I see plenty of beer and liquor commercials. I grin when they urge us to drink responsibly.
....(Truth is, they know we won't. If we drank responsibly, they'd lose a ton of sales, wouldn't they?)

According to those Visa commercials, using cash impedes our spending power. They prove it when some jerk produces cash to pay for his purchase and thus causes everything to move in slow motion. Apparently purchases can be processed faster if we use their credit card.
....(It wouldn't have anything to do with the fact that if we paid cash, they would be unable to charge us an additional 21.875%, would it?)

Have you seen those Doritos ads, especially those aired during the Super Bowl, which feature all those stacked well-toned hotties in those skimpy bikinis chomping away on the product?
....(Curiously, none of the women I've ever seen chowing down on Doritos look anything like that!)

Auto manufacturers love to boast of how well their cars, trucks and SUVs perform. It's a great marketing angle to show potential buyers all the cool things they can do with the vehicles.
....(Now isn't it interesting that a disclaimer appears at the bottom of your TV screen: "Professional drivers on a controlled course." In other words, don't try this.)

Huge oil companies spend 'mucho dineros' on TV spots telling us how much they care about the environment.
....(Why not spend some of that money towards cleaning up the pollution their products create?)

Some commercials are redundant, like those that air during NASCAR races.
....(Why not show the entire races without interruption? After all, the damned cars are plastered with product logos.)

I have noticed that Geico has featured a gecko (with two different voices), socially dysfunctional cavemen, high-fiving squirrels, celebrities and most recently, the Flintstones and Jed Clampett in their frequently airing commercials.
....(Should I be instilled with confidence in an insurance company that can't commit to one ad campaign? How can I be sure their rates are fair and will remain so?)

There you have it, my dirty dozen examples of some contemporary advertisements. Of course they wouldn't be running these commercials if no one were buying their products or using their services.

....And now a word from my sponsor. This Blog was brought to you by the fine people at Blogger.

No.1138
Curmudgeon responsible for this post: Hale McKay at 8:46 PM