Gore the Bore & and a Nobel Score

This has got to be the most laughable award presentation since Liza Minnelli (Cabaret) was given the Oscar over a more-deserving Diana Ross (Lady Sings the Blues). It's the biggest fix since the Florida vote-tampering scandal. Hmmm ... Payback?

The scary part is the possible opportunity that has been opened for Gore the Bore. With just a word of commitment, overnight he would become the front-runner for the Democratic nomination to run for the White House. Sorry, Hillary! Time to get back in the kitchen and rattle those pots and pans!

Why do I think there was a fix regarding this year's Nobel Prize? All one has to is to take a gander at the competition. Who was he up against? A stellar lineup this one was (save for your laughter until the end of the list): Tony Blair, Oprah Winfrey, Rush Limbaugh, Bono of U2, a couple of insignificant world leaders, and our dear President, Dubya himself ! Why didn't they just Fed-Ex it to him and not bother with an asinine award ceremony? By the way, I understand Dubya is demanding a recount!

Except in satires or parodies I don't usually post about politics, but sometimes certain things just stick in my craw! Not only was it sad that the Hollywood butt-kissers nominated his film, they even gave it to him!

That Oscar (An Inconvenient Truth) is still churning behind my belt! Based loosely on fact, scarcely none of which was used in the film, Gore's movie was riddled with mistakes and half-truths.

Gore: Carbon emissions are the cause of global warming.
Qualified Scientists: Wrong, moose breath! Global warming is cyclic, occurring every 20 to 50 thousand years.

Gore: I won a Nobel Prize.
Qualified Scientists: We know, you're sharing it with us.

On a less serious and more positive note:

A big-shot politician and slum lord named Al Gore had to spent a few days in the hospital due to campaign stress. Al Gore was a royal pain to the nurses because he bossed them around just like he did his campaign staff. None of the hospital workers wanted to have anything to do with him. The head nurse was the only one who could stand up to him. She walked into Al's room and announced, "Mr. Gore I have to take your temperature."

....After complaining for several minutes, Al finally settled down, and crossed his arms and opened his mouth. "No Mr. Gore, I'm sorry", the nurse said, "but for this reading, I can't use an oral thermometer." This started another round of complaining, but Al finally rolled over and bared his fat behind. After feeling the nurse insert the thermometer, Al heard her announce, "I have to get something, now you stay JUST LIKE THAT until I get back!"
....She leaves the door to Al's room open on her way out. Al curses under his breath as he hears people walking past his door, laughing. After almost an hour, Al Gore's doctor comes into the room.
...."What's going on here?" asked the doctor.
....Angrily, Al Gore answers. "What's the matter, Doc? Haven't you ever seen someone having their temperature taken before?"
....After a pause, the doctor replies. "Yes, but never with a daffodil!"

Not too sure if it's true, but it's good for politicking around ... Maybe Snopes knows (Thanks, Earl)

My husband is a liar and a cheat. He has cheated on me from the beginning, and, when I confront him, he denies everything. What's worse, everyone knows that he cheats on me. It is so humiliating.

Also, since he lost his job six years ago, he hasn't even looked for a new one. All he does all day is smoke cigars,cruise around and shoot the bull with his buddies, while I have to work to pay the bills.

Since our daughter went away to college he doesn't even pretend to like me,and even hints that I may be a lesbian.

What should I do?

Grow up and dump him. Good grief woman! You don't need him anymore!
You're a Senator from New York running for President of the United States. Act like one.

Have you seen the latest campaign button? (Thanks again, Earl) 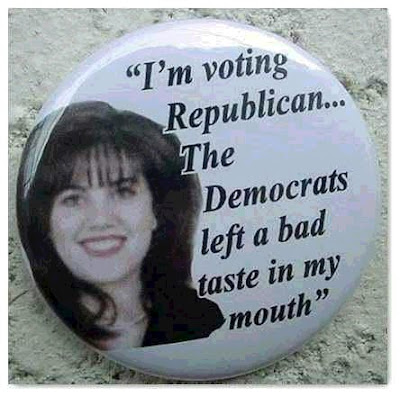 No.1137
Curmudgeon responsible for this post: Hale McKay at 9:51 PM