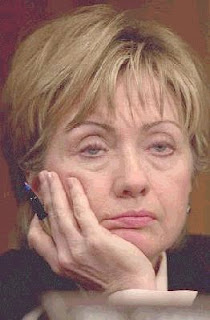 Dear former President Clinton,
I would be honored to sing “Happy Birthday Mrs. President” to your wife.
Marilyn Manson

Happy B’Day, Hill!
Hef
P.S. I for one like the cleavage.

Happy Birthday Mrs. future President
You know if I was there I would throw the most extravagant party ever for you.
Number one Bundler,
Norman Hsu
Messa County Correctional Facility

Happy Birthday Hillary,
Thanks for your support and taking the time to have dinner with me in the Senate dinning room the other night. I understand that yet again my words got confused. When the waiter asked me how I like my lamb, I did not say, “pushing back,” I said “less fat.”
Your stalwart friend from Idaho ,
Larry Craig

A very Happy Birthday Senator Clinton.
You know you can count on me and my white Bronco to knife my way through Miami traffic when you’re campaigning in Florida .
Orenthal James Simpson

Happy Birthday, there, Hillary,
If you ever get a proclivity to Greek love, I’ll be there for ya.
Gamma Alpha Upsilon,
Rosie O’Donnell

Dear Senator Clinton,
Best wishes on your 60th.I hope you enjoy my Thighmaster Gold, to keep you tone and fit, just place it between your legs and squeeze.
Suzanne Somers

Happy Birthday Hillary,
Where, have the years gone? Gosh, it only seems like yesterday when you were on CBS’ 60 Minutes and said: “I’m not sitting here like some little woman ‘standing by my man’ like Tammy Wynette.”
Love,
Michelle Obama

Happy 62nd Birthday,
That’s right, we know, you were born in 1945 to a Walloon mother and a Flemish father while they were attending the Patrice Lumumba University in Moscow . They disappeared in 1959 during the Leopoldville riots in the Belgian Congo . You were flown on Trans Canada Airlines flight 1618 to Gander , Newfoundland in the spring of 1960 and came to the US at the small border crossing of Coburn Gore, Maine , disguised as a member of The Girls Choir of Harlem. The complete story will be in next month’s issue of Redbook, available on newstands November 8th.
Better living through truth,
The vast right-wing conspiracy

I received the above birthday wishes to Hillary Clinton from John (JAB) - THANKS A BUNCH, JOHN. Well I liked them so much, I decided to try to come up with a few of my own!

Happy Birthday Hill Honey,
I saw the one from Fidel. If you don't want the cigars, I'll put them to good use.
Love, Bubba.

Happy Birthday Hilly,
60 candles eh? Have you ever had hot candle wax dripped onto your body? I would be happy to demonstrate my technique to you sometime.
Ellen Degeneres

Happy Birthday Senator Hillary Clinton,
I would like you to consider appearing on my TV program. Before a live studio audience and millions of viewers at home we can discuss your character flaws. There is probably some latent memory from your childhood that has caused you to develop this "I'm better than everyone else" attitude. With my help, maybe we can make you more likable and who knows, maybe even electable.
Dr. Phil

Happy Birthday Senator BITCH,
Even though you abandoned me and pawned me off onto someone else, I harbor no ill feelings. I am better fed and treated much better than when I lived with you and that jerk of a husband and his stupid dog. I scooped up a present from my box especially for you.
Former White House pet,
Socks

Dear former President Clinton,
I commend your choice of the daring lingerie items you have ordered for your wife's 60th birthday. But a size three? Are these items for your wife or someone else? You should consider sizes more like sevens or eights. Unfortunately, the items you ordered don't come that large. Perhaps you should consider placing your order with the Cedar Rapids Burlap Company.
Sales Manager,
Victoria's Secret

No.1147
Curmudgeon responsible for this post: Hale McKay at 8:21 PM

Thanks for the update on Cups Runneth Over - I had missed that chapter!

LOL. I'm sure Hillary will love all the birthday greetings.:-)